The Corset in Late 20th-Century Fashion 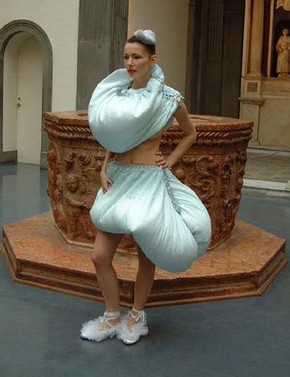 Why is the corset still in fashion? The presence in contemporary wardrobes of a garment from the 19th century, physically oppressive and associated with women’s inferior status, suggests that somehow the image of the corset still finds an echo in our societies - though perhaps its meaning has evolved and changed.

The disappearance and reappearance of the corset in 20th century fashion seem to be linked to the cyclical changing of female shapes, especially to the waist being enhanced or concealed.

During the 20th century, the corset was regularly revived as outerwear when part of a revival, or simply suggested by designs that try to obtain the hourglass figure inherited from it.

According to the official story, in 1909 Poiret banned the corset after centuries of tyrannical reign over women’s fashion. The fact that at the same time Poiret put women into hobble-skirts suggests that he didn’t discard the corset to free them, but because the shape of the corset interfered with the lines of his newest designs. Poiret’s dresses, with the focus positioned on the shoulders and not on the waist, would evolve into the bi-dimensional dresses of the 1920s.

The flat and square dresses of the 1920s became an ideal canvas to display the artistic and sophisticated motifs of the Art Deco period. The female body became almost abstract and the natural waist a feature from the past. To achieve the desirable silhouette, the rigid corset was abandoned for a softer one that flattened the female form. This decade saw a real fight between designers who saw the shapeless dress as limiting, and women for whom this fashion was a liberation. In 1928, the designers won and dresses started showing some volumetric features.

In the 1930s fashion brought the waist back into focus, with the help of intricate cuts or bold colour combinations. There was an evolution towards a more tri-dimensional figure all through the decade. This can be seen in the importance of the waist and, later, the shoulders. What could be more appropriate than the corset to put the rediscovered female form into the spotlights? Incidentally, by the end of the 1930s, soft corsets and bodices on evening gowns became part of a Victorian revival, popularised by movies like Gone with the Wind and Little Women. The waist was small, the shoulders broad, and the whole shape prefigured the hourglass figure of 1947 'New Look'.

From the late 1940s, designers would try to achieve the same tight-fitting silhouette, previously obtained with the corset, through ingenious cuts, padding and boning, the most potent example being the archetypal and iconic 'Bar' suit designed by Dior. Again, as if to reaffirm its role in the phenomenon, the corset came back, this time transformed into a 'bustier' and used in most of the evening gowns of the late 1940s and early 1950s.

By the mid 1950s, there was definite research into a more geometric and architectural fashion. In search of new shapes, designers studied dresses as volumes and experimented with the waist, moving it up, down or concealing it totally.

In the mid 1970s, Vivienne Westwood became the first designer of the 20th century to use the corset in its original form since Poiret had rejected it. Her approach was both artistic and theatrical and set a new and definite trend in contemporary fashion. The use of historical garments combined with her unique perception of the zeitgeist, became the core of her work. Her corsets from the 18th century gave women a feeling of glamour and power not felt for a long time.

In the 1980s, other designers would follow in her path, but using the 19th-century Victorian corset this time. In Jean-Paul Gaultier and Thierry Mugler’s hands, corsets would become armour for a late 20th-century cyber-woman out of a science-fiction cartoon.

From then on, the corset would serve as a base from which designers created powerful designs. The features of the corset were stylised or exaggerated, or they disappeared and only the shape was kept and transformed into a plastic moulded armour. The results were stunning. The corset had become an 'objet d’art', with a new meaning, artistic of course but also social - almost a statement. No longer the symbol of women’s oppression, the corset had become a symbol of sexual empowerment. Gaultier’s corsets became iconic when Madonna wore one during her world-tour in 1990. Since then, the corset has been Gaultier’s fetish and his perfumes are sold in a corset-shaped bottle.

The presence of corsets on the catwalk was not fortuitous. Westwood’s corsets were a 'catwalk' expression of punk sexuality. Gaultier and Mugler’s armour-like corsets epitomised power fashion and the cult of the body in yuppie culture. There again, the factual corset co-existed on the catwalks with the 'ghost' corset found in the triangular shape of the 1980s: narrow waist and broad shoulders.

The 1990s were to be dominated by a more eastern conception of fashion, which banned constriction in favour of unshaped, layered garments. Alongside collections focusing on ethnic inspirations, some designers such as Lacroix and Mugler still presented sophisticated corsets, mostly in evening gowns or wedding dresses.

The innovation of 2000s is the translation of the corset into daywear. It comes in two versions: the 'obvious' corset, largely inspired by the Victorian original, worn solo or over a garment (Stella McCartney), or a more abstract corset, suggested in the curved shape of a jacket, or suggested by sophisticated lacing, or by intricate stitching (Balenciaga, Saint-Laurent). Worn over a garment, or pulled over like a jumper, the corset has been given a new dimension by Comme des Garçons. Other designers such as the brilliant Nicolas Ghesquiere (Balenciaga) and Tom Ford have recreated the shape of the corset in their suits, dresses or shirts, not only with a tight fitting cut but also by adding some volume at the hips. Another novelty is the experimentation with the corset’s idiosyncratic lacing and boning, recreated on casual daywear garments, on a jacket, or on the back of a shirt (Gaultier and Saint-Laurent).

Never before have designs based on the corset reached such maturity and harmony. Designers seem to have captured the essence of the corset, they have transcended its shape, and its extremely refined and inspiring features. Today's corsets are sophisticated and extremely wearable. The passage of the corset into daywear marks the final stage in the transfer of a garment’s use, a regular phenomenon in fashion, by which an underwear becomes an outwear (T-shirt, boiler suit).

Throughout the 20th century, the corset has evolved into bustiers, bodices or armour, but it has left the indelible fantasy of an idealised, flattering, tight-fitting female silhouette, which is timeless and still appeals today. The corset is full of paradoxes and that probably explains why it is still part of our society: it is timeless but it has never stopped evolving. The corset bears an everlasting sexual attraction: it glorifies, underlines, exacerbates and idealises the female form. It has evolved esthetically and symbolically: from underwear to outerwear (in late 19th century ball gowns), from corsets to bustiers, from constriction to power, from lingerie to armour.

The corset expresses contradictory messages: constriction and freedom, dominance and submission, femininity and power. And it refers to current social values: violence, war, sex, nostalgia and conservatism. Psychologically, the popularity of the corset can be explained by its strong connotation. The corset, still being a historical garment, probably gives the wearer the feeling of timelessness and freedom felt when wearing fancy dress. It lets her adopt a role, a character, maybe a powerful seductress, which is not allowed during daily life. It is also a reminder of an idealised past, pictured in Toulouse-Lautrec’s paintings and in the movie Moulin Rouge.

The corset is a beautiful object, with harmonious lines and volumes and it celebrates the beauty of women’s bodies. In the 'minute culture' of our societies, dominated by the ephemeral (Lipovetsky, Gilles, L'empire de l'éphémère, Poche, 1991), the corset remains a timeless element of seduction and will continue to inspire future generations of designers.