The court of Maharaja Ranjit Singh

The court of Maharaja Ranjit Singh 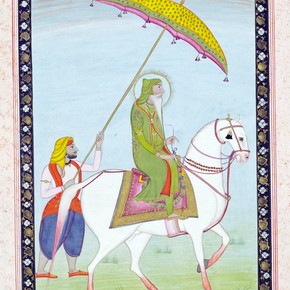 Ranjit Singh's court was one of the most magnificent in the whole of India, particularly when the Maharaja wished to impress foreign visitors. Then, scarlet tented pavilions might be set up on gold and silver poles near the river, lined with luxurious shawls from Kashmir, their floors covered with fine carpets. Men and women alike glittered with jewels.

Visitors would approach the small, plainly dressed figure of the Maharaja, his face disfigured by the childhood smallpox which had left him blind in one eye, to be bombarded with questions. He had boundless curiosity, remarkable energy and a compelling personality.

He preferred to sit on a chair or on the floor, but had a golden throne for state occasions. He dressed with notorious simplicity, yet owned some of the most fabulous jewels of the Mughal emperors, including the Koh-i nur diamond and the stone which became known in the West as the Timur ruby. He employed artists at court, collected Mughal jade and crystal, built monuments and laid out gardens. 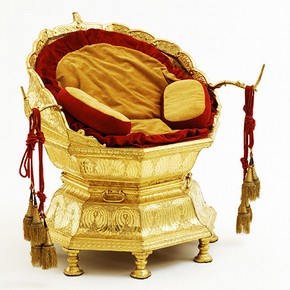 He created an atmosphere of religious tolerance in which Hindus, Muslims and Sikhs were all appointed to high office. Artists and craftsmen, similarly, worked for patrons without regard for religious differences: the Sikh Maharaja's throne was made by a Muslim, and craftsmen of all religions worked on the building of the Golden Temple.

Europeans at the Sikh court

In 1822, two former generals of Napoleon Bonaparte arrived at Lahore, having travelled eastwards, sometimes in disguise, in search of suitable new employment. They found it at the Sikh court. 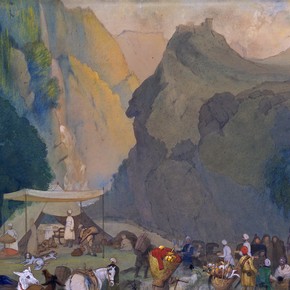 They were joined by Auguste Court, who played a key role in developing the artillery, Sikh engineers skilfully copying the cannons presented to Ranjit Singh by the British. The generals settled at Lahore, marrying local wives, employing court artists and exporting fine Kashmir shawls to France.

The British usually visited Lahore as part of diplomatic missions, each side keeping a wary eye on the other and reporting the events in their respective official documents. Artists from both sides also occasionally recorded their impressions, showing that the appreciation of exoticism was mutual. Many of these European visitors later published accounts of their visits, some of them illustrating their stories with prints taken from sketches of the leading personalities they had met at the Sikh court.

Life outside the Sikh court

From time to time, details of the daily life of the Panjab outside the court may be glimpsed in paintings of the 19th century. Many of these have a timeless quality. A painting of 1870 by J. Lockwood Kipling, the British Head of the Mayo School of Art in Lahore, shows carpet weavers working seated at a traditional loom. There is also a painting depicting a school scene, where a boy is being punished by having to adopt the 'cockerel' position, crouching down with his arms behind his knees, holding on to his ears.

The style of the painting may also provide information about the lives of painters outside the court. Inscriptions on manuscripts show, for example, that Kashmiri artists and illuminators travelled widely throughout the Panjab, working for patrons of all religions. Artists from the Hindu hill kingdoms moved away from their traditional patrons to find work in the Sikh empire, their styles having a major influence on the work being produced. 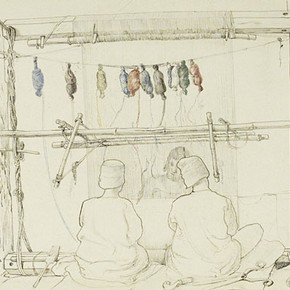 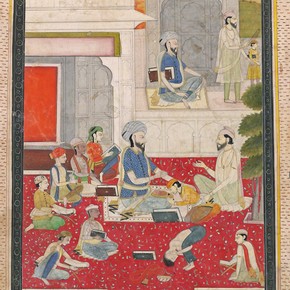