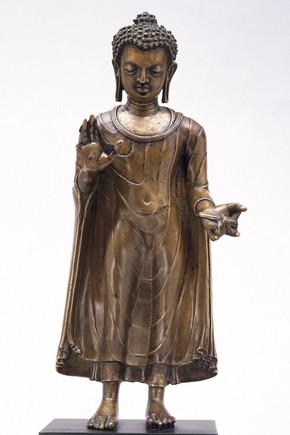 Jainism and other Indian religious traditions

The four ancient Indian religious traditions of Jainism, Ajivikism, Buddhism and Hinduism developed in South Asia over a period of more than a thousand years. Whilst Hinduism and Jainism continued to flourish, Ajivikism died out and Buddhism disappeared from most parts of India in the medieval period. However, despite its decline in India, Buddhism spread throughout Asia and subsequently became a world religion.

Although each of these traditions formed distinct strands from early in their history, they share many common features, particularly the belief in karma (the law of cause and effect stating that every action and thought has consequences that will manifest in the future), the belief that after death we are reborn (a process that continues over many, many lifetimes) and the ideal of liberation from this cycle of rebirth.

Unlike Jainism, Ajivikism and Buddhism, Hinduism has no clearly identifiable core of doctrines or beliefs, but reflects a complex cultural tradition that includes many different religious guidelines and practices which developed from the interaction of Vedic Brahmanism and local culture.

The focus of Jainism on non-violence (ahimsa), had a strong influence on both Buddhism and Hinduism. This is seen in the Hindu tradition through the gradual abandonment of animal sacrifices and increasing emphasis on symbolic and devotional forms of worship in the temple.

Both Jainism and Buddhism are recognised as independent religions by the Indian Constitution and by the Census of India, though only Buddhism presently enjoys the status of a minority religion in India as a whole. Most Buddhists in India today are refugees from Tibet and Ambedkar Buddhists, recent converts from Hinduism.

The Jain path of salvation demands extensive practices of asceticism and renunciation. All violence should be avoided. Hence, the ideal Jains are monks (sadhu or muni) and nuns (sadvi or aryika), who alone are able to dedicate their entire life to non-violent conduct. Exceptional lay-people, such as the mythical hero Bahubali, who renounced the world without being formally initiated into a monastic order, are also praised in Jain literature, art and ritual. Ideally, all actions except ascetic practices should be renounced.

Historically, Jain concepts of asceticism (tapasya) were extended from the original physical practices of abstinence from food and drink and self-mortifications, such as deliberate exposure to the blazing midday sun (atapana), to practices of meditation, study and monastic service. Jain literature and art celebrate the exemplary acts of world-renouncers and their benevolent influence on the world we live in. One of the prototypical images of Jain art are depictions of monks who meditate or practice kayotsarga and of the samavasarana or sermon of the enlightened Jinas or Tirthankaras to the world.

Six external and six internal forms of asceticism are distinguished in Jain scriptures such as the Uttaradhyayana Sutra 30.

Fasting (anasana); abstinences with regard to substance, place, time, state of mind, development (avamaudarika); practising restraint in collecting alms (bhiksacarya); renunciation of delicacy (rasa-parityaga); self-mortification (kaya-klesa) and renunciation of temptations by retreating from the world (samlinata). 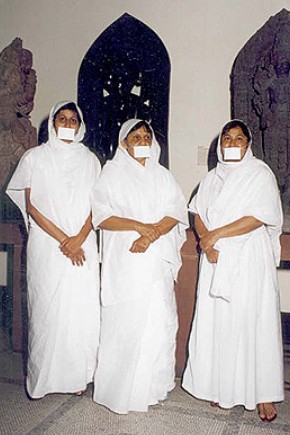 Jain nuns at the V&A

The role of women

Women, whether real or legendary, are an important component of Jain culture. The Jain community includes two categories of women: mendicants (sadhvis), who live on alms, and those living in society From the evidence found in the oldest Jain texts, it appears that among the Svetambara Jains, nuns have always been more numerous than monks. This was true of the religious community surrounding the 24th Jina, Mahavira (6th - 5th century BC) and is also true today.

The inferior status of nuns compared to monks is a difficult question and depends on the which order of Jainism they belong to. In theory and in practice, nuns are subjected to more restrictions than their male counterparts. Nevertheless, examples of prominent nuns as influential teachers, propagators of the faith, writers and so on, have been, and still are, numerous.

Jain lay-women have in important role in the transmission of fundamental values in the families. They have a command over dietary rules since they prepare the food and offer it to mendicants as alms. They are seen in large numbers attending the sermons of mendicants and organise themselves into groups for singing and chanting religious hymns. They often draw from the wealth of Jain stories and narrate them to young children.