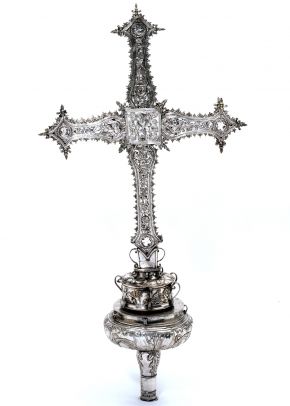 The V&A's collection of objects used in worship is vast. The Sacred Silver collection comprises objects made for Christian worship (Catholic and Protestant, from Britain, Europe and beyond). It also features a small but significant collection of Judaica (objects used in Jewish worship). The collection dates from early medieval times to the present day.

The Christian church has always been one of the most important patrons for the goldsmith's trade. Throughout its history, precious vessels of gold and silver have played an important role in its rites and ceremonies, as they have in the Jewish faith.

Some of the finest examples of the craft can be seen in silver made for worship. Some elaborate piece were designed to evoke awe. Other more simplistic pieces focus on function over spectacle.

The richness or simplicity of sacred vessels reflects differing ideologies within the Christian church. At various stages of church history special kinds of silver have been made in response to concerns and beliefs: reliquaries for the venerated remains of saints, crosses for processions, alms dishes for the collection of gifts for the poor. This diversity reflects the complex history of the church, and the living faith of its members. 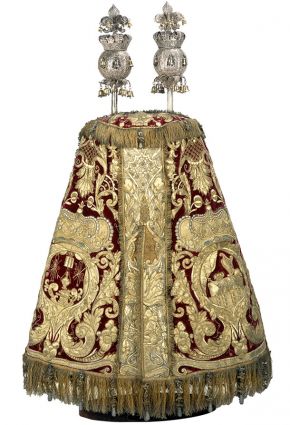 The velvet Torah mantle covers a Torah scroll, the most sacred object in the Jewish faith. Above the mantle are a pair of silver rimmonim (the Hebrew word for pomegranates) that recall the bells worn on the High Priest's robe in the Bible. The scroll itself contains the first five books of the Bible (the Pentateuch) and is kept in the Ark of the Law (Aron ha-Kodesh), which is the central focus of the synagogue. On Sabbaths, Mondays, Thursdays and holy days it is taken out and read in front of the congregation. On these days the dressed ornamented Torah is walked in procession around the synagogue before and after the Torah reading.

This magnificent Torah mantle probably came from the Sephardic synagogue in Amsterdam, where there was a thriving Jewish community in the 17th and 18th centuries. It is decorated on the front with the Ark of the Law in the Amsterdam synagogue.

Listen to the audio clips below to find out more about this Torah mantle & rimmonim.

The object in front of you is a decorated cloth, called a Mantle. This is used to cover the Torah, a sacred Jewish text that is read regularly in synagogues.

The Torah is hand written on parchment in the form of a large scroll and is the spiritual focus of every Synagogue. The Torah contains the first five books of the Bible that include 613 commandments covering every aspect of daily life, and is therefore the holiest object in Judaism.

The Mantle resembles an elaborate cloak, and is draped over the Torah to protect it. The one in front of you is thought to have been made in Amsterdam between 1650 and 1700 and stands over a metre tall.

The Torah is the most sacred text of the Jewish people. objects connected with the Torah have a special significance. This mantle, made of deep red and golden velvet, is highly decorated with designs in silver and silver-gilt thread. The stitching is built up in layers so the designs are in relief. The red dye and the silver thread would have been extremely expensive at the time, and the intricacy of the work displays a high level of skill.

In the centre of the Mantle, a round decoration shows the main synagogue in Amsterdam, where the mantle may have been used. Above the synagogue, an elaborate Crown symbolises three things: the Law, God's power and the Torah as the crown of Judaism. Around these central designs, the Mantle is further decorated in the style of the time with flowers, scrolls, and coils. Along the bottom, a fringe of silver thread contains tassels. Above the mantle there is a pair of silver ornaments in the form of pomegranates, with bells and a crown above.

The Torah scroll with its mantle and ornaments are carried in procession around the synagogue on Sabbaths and holy days. The Mantle is removed before the Torah reading. The splendour of this Mantle focusses attention on the most sacred object in the Synagogue and beautifies the ceremony of reading from the Torah.

'And they made bells of pure gold, and put the bells between the pomegranates upon the skirts of the robe' Exodus 39:25

At the top of the case is a pair of Rimmonim engraved with the name 'Moses Montefiore'. They are symbolic objects used to adorn the Torah - the most sacred text of the Jewish people.

The Hebrew word 'rimmonim' means 'pomegranates.' In the Jewish tradition the pomegranate [which is said to have 613 seeds] is symbolic of the 613 commandments of the Torah.

The Torah contains the first five books of the Bible, hand written on parchment in the form of a large scroll, and wound on rollers called A-tsei Hayyim - the 'Trees of Life'. The Rimmonim are placed over the tops of the rollers as a pair of ornamental finials.

Because the Torah is the spiritual focus of every synagogue, read out on every Sabbath and holy day, any objects connected with it have a special significance.

This exquisite pair of rimmonim are made out of silver and some elements embellished with a thin layer of gold. Made in Amsterdam around 1750, they stand 45.5 cm tall. A tubular stave is topped by a six-sided structure four tiers high - of columns, arches and balconies - each tier becoming smaller towards the top. These tower-like architectural decorations were fashionable at the time they were made, and the degree of detail and craftsmanship shows they would have been an expensive commission. Golden bells hang in the centre of each arch and one also hangs in the centre of each tier.

The Torah is the crown of Judaism. At the top of each rimmon is a small open, golden crown - tiny undulations on its surface suggesting jewels. At the top of the crown, there is a golden flame.

The Torah is always covered with a mantle or a specially embroidered textile. The grander versions of mantles may be reminiscent of the robes worn by the High Priest of the ancient Temple of Jerusalem. When the 'dressed' Torah is carried in procession around the synagogue the sound of the bells reaches out to all who are present. The mantle, rimmonim, and other ornaments are then removed before the sacred scroll is unrolled for the reading.

Along the length of each of the staves the name Moses Montefiore, and date 5580 is engraved within a scroll. Sir Moses Montefiore was a leading member of the Jewish community in Britain in the nineteenth century and was made a Sheriff of London in 1836 and knighted by Queen Victoria in 1837. The date of 5580 in the Jewish calendar corresponds to 1820. Possibly, these beautiful Rimmonim were presented by Sir Moses to a synagogue on that date. 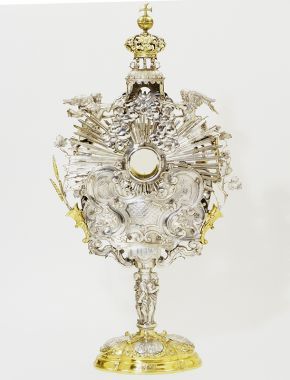 The monstrance displayed the Sacred Host, the consecrated bread which in Catholic belief is the body of Christ. Monstrances first appeared in 1264 after the institution of the Feast of Corpus Christi. They became especially prominent during the Counter Reformation, when the Catholic church placed great emphasis on the Eucharist (the ceremony in which the wine and bread are transformed into the blood and body of Christ) .

This magnificent German example embodies Counter Reformation theology. In the centre is the Last Supper with the disciples seated at the table. Christ himself is represented only when the Host is placed inside the window. The rays of the sun represent his radiance. The corn and grapes on either side refer to the bread and wine of the Mass, which become his body and blood.

Listen to the audio clip below to find out more about this monstrance.

This dramatic Monstrance was used to display the consecrated bread that is miraculously transformed into the body of Christ by a priest during the Mass service, the central act of Catholic worship. Made in 1705 in Augsburg, Germany (one of the great centres of silver-work), the Monstrance stands some 85 centimetres tall and is an elaborate sunburst held up on a stand.

Delicate needles of silver-gilt radiate like the rays of the sun from a small, round, glass window - the focus in the centre of the piece. On the fringes of the sun, at either side, golden 'horns of plenty' hold stalks of corn and vines laden with ripening grapes (a reference to the bread and wine used during the Mass). Above, on either side, hover silver angels in flowing robes, while other cherubic faces peer down at the small window from above.

Beneath the window, the sun rays lead us to a silver relief depicting the Last Supper (the final meal eaten by Christ and his disciples before he was betrayed by Judas). It was at the Last Supper that Christ broke bread and gave it to his disciples saying: 'This is my body which is given for you: do this in remembrance of me'. The twelve disciples sit at a long table, in the centre of which is a gilt chalice. All look towards Christ except one to the right, the figure of Judas who turns his face away, hand clutching a money bag.

But the most startling feature is that Christ himself is absent, his space at the table occupied by the small glass window. A priest would place the consecrated bread behind the window. As the bread has become the body of Christ, instead of an image of Christ, He is now present in person.

This large piece of silver work was clearly meant to be seen by the congregation and at certain times would have been held up high in procession. The high quality workmanship and attention to detail demonstrate just how important the Monstrance was to the Church and its followers. 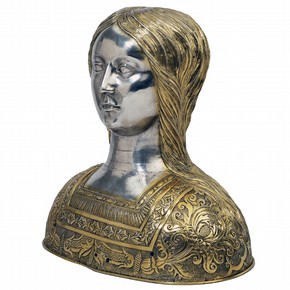 Relics are bones or fragments associated with saints. They are kept secure in containers called reliquaries, whose design sometimes evokes the relic itself. This empty reliquary portrays a young girl in a brocaded dress with a fashionable square-cut bodice. Her identity is unknown, but she probably represents a virgin martyr, perhaps St Ursula, who according to legend, was martyred with 11,000 virgins. The reliquary may originally have held a relic of her head.