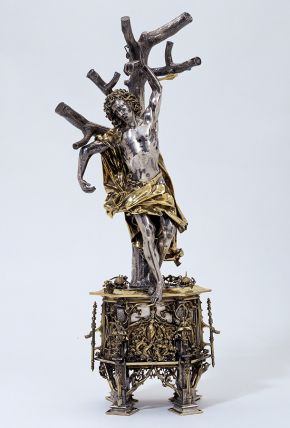 The beauty, lustre and intrinsic value of silver have made it an object of admiration and aspiration for centuries. The V&A cares for over 10,000 objects in silver and gold from many parts of the world, and has more English silver and a greater range of objects than any other public collection worldwide.

The Silver Galleries set the Museum's breathtaking silver collections in their artistic, social, historical and geographical context. From a glittering English table centrepiece in silver and glass to a hearty Swedish beer tankard, from an 18th-century English baby’s rattle to a 17th-century Dutch silver-mounted coconut, there is a range of objects and styles to please every taste. Highlights of the collection include a German reliquary, made around 1497, depicting St Sebastian tied to a tree and pierced with arrows, a salver commissioned by Sir Robert Walpole in 1728 to commemorate his terms as Chancellor of the Exchequer and a large soup tureen from a dinner service presented in 1816 by the Portuguese government to the Duke of Wellington.

You can investigate hallmarks fakes and forgeries, dentify and find out the meaning of icons on sacred silver, the techniques of making and decorating silver, and cleaning and care.

Explore over fifty original designs for silver spanning five centuries and match them to objects on display. See, touch and learn in the Discovery Area. Visitors can handle objects and explore the world of silver through touch-screen computers and interactive displays. You can stamp a silver mark and test your wits on silver subjects.

The silver displayed in the long Silver Galleries is grouped in three sections: 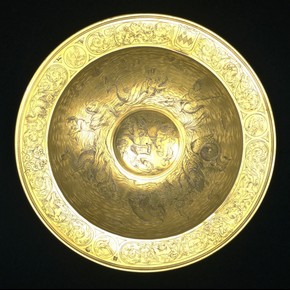 The National Collection gives a comprehensive account of silversmithing in the British Isles. The enormous, flamboyant table centrepiece made by Nicolas Sprimont in 1747 for the Earl of Ashburnham is an exciting new inclusion in the gallery. A baby’s silver rattle with an attachment of coral for teething, a delicate band of silver lace for decorating a dressing table, an Elizabethan gentleman’s gambling counters and a collection of miniature silver toys are some of the more exquisite pieces on show.

You can learn all about the new fashion for drinking tea, coffee and chocolate at the end of the 17th-century, marvel at the inventiveness of the makers of cheaper silver substitutes like Sheffield plate, and learn all about the silver hallmarking system. Objects range from spectacular candelabra and presentation cups by some of the most celebrated makers, such as Paul de Lamerie, Charles Kandler and Matthew Boulton, to functional silver for eating and drinking by less fortunate makers such as Arthur Mangay, hanged for counterfeiting a few years after making the bowl in our collection!

The British silver displays make a dramatic entrance to the restored 19th-century galleries from the Ceramic staircase. 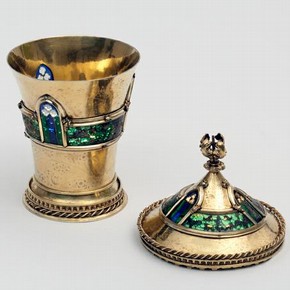 The most recently completed room is home to European Silver 1400-1800. See over 650 objects in silver and gold spanning from France to Russia, and from Scandinavia to Italy. German 16th-century presentation cups, magnificent Spanish church silver, French 18th-century dining silver and medallion encrusted tankards from 17th-century Sweden all take you on an exciting European silver tour. You can explore changes in fashion across Europe through some of the Museum’s most precious treasures. A recently acquired German 15th-century reliquary of St Sebastian, pierced with silver arrows, creates a theatrical entrance to the galleries. An early 15th-century French covered cup is another highlight of our Gothic collections. Delicately pricked with flowers and birds, the cup has two bands of enamel suspended in hollow cells like stained glass to create an exquisite lightshow.

The story of style continues through the formal richness of the Renaissance via the extravagant Baroque and the wild abandon of the 18th-century Rococo. Finely chased dishes from 16th-century South Germany contrast vividly with the naturalistic, gravity-defying dining silver favoured by the 18th-century aristocracy. Restrained classicism in the later 18th century, inspired by the architecture of ancient Greece and Rome, pushed the playful Rococo aside. A diminutive but superbly crafted gold egg cup of 1762-3, matching an almost identical design from an album in the V&A used by the workshop of the Paris goldsmith Jean Ducrollay, is an exciting new addition to this area of the collection.

Southern Germany was one of the greatest centres of European silversmithing and our collections from this region are outstanding. Displays include an exploration of the German guild system, a forerunner of trade unions, which offered rigid training and employment protection for goldsmiths and guarantees of quality for customers. A spectacular recreation of a wealthy German merchant’s buffet of around 1620 illustrates the skill of the German goldsmith.

Manufacturing techniques, from casting to chasing, are also explained to show the variety of skills demonstrated by goldsmiths. The market for small luxury goods, from a turtle shell spy-glass inlaid with silver and gold to a mechanical, segmented pomander, is explored to show the skills demanded of goldsmiths.

By 1600 owning a collection of magnificent artworks was a princely obligation. One of the richest displays in the gallery features wonders of the natural world - fossils, minerals, shells, animal horns - encapsulated in elaborate silver mounts to create a colourful, exotic treasury. These were not simply display items: drinking from coconut shells was believed to offer a powerful aphrodisiac, while serpentine and rhinoceros horn warded against poison.

In this section of the Silver galleries, over 1400 objects from Britain and the world reflect key social issues and developments in the craft during a period of massive expansion. Thematic displays in the galleries are devoted to the changing uses of silver in the home, technological innovation, manufacturing and new markets, international exhibitions and the battles of the styles.

A collector’s cabinet displays material drawn from the Museum’s extensive holdings of small silver, including bottle tickets and cutlery. See the small vinaigrette or scent box, reputed to have prevented George IV from fainting at his coronation! Some of the V&A’s sumptuous collection of electrotype copies are on view, among them three splendid life-size silver lions copied from Rosenborg Castle, Copenhagen, which command one end of the galleries. 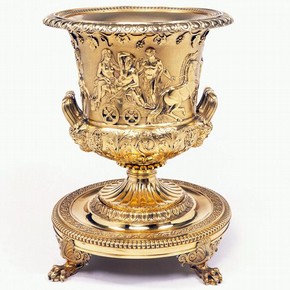 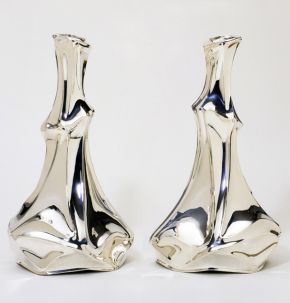 Exhibits range from the spectacular – the magnificent Doncaster race cup of 1857 and a finely sculpted tureen based on designs by Karl Friedrich Schinkel – to the mass-produced – a nutmeg grater and an electroplated jug supplied to a shipping line. The pioneering designers A. W. N. Pugin, William Burges, Christopher Dresser and C. R. Ashbee all feature, as do the major goldsmiths and retailers Paul Storr, J. B. C. Odiot and Elkington & Co.

One gallery is devoted to silver of the last hundred years, plotting a sparkling course from the elegance of Art Nouveau and the Art and Crafts movement to the cutting edge of the modern craft.

The Museum is committed to the contemporary and in addition to acquiring historic silver, actively commissions new work from silversmiths. Chris Knight’s candelabra, commissioned by the Friends of the V&A, are among the more spectacular. Australia and Italy are represented by the work of Susan Cohn and the San Lorenzo studio of Milan. The Dutch silversmith Jan Van Nouhys neatly turns the collection a full circle with his shimmering candlesticks inspired by the fluid work of the great 17th-century Van Vianen family.

Explore objects in the Silver collections