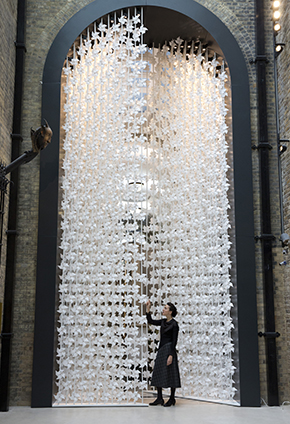 As part of the London Design Festival 2013, Lebanese designer, Najla El Zein, created The Wind Portal, a dramatic gateway constructed from 5,000 paper windmills turning in the breeze. This walk-through installation created a playful airway, drawing wind and light into the galleries beyond.

Based in Beirut, Najla el Zein takes an experimental approach to design; blurring the lines between art and design and using ordinary materials in unsuspecting contexts. For The Wind Portal she used thousands of paper windmills, a toy familiar from childhood, to create a gigantic moving structure. The portal was imposing in scale, yet largely made of paper it also delicate and ephemeral. El Zein was inspired by the V&A’s day-lit gallery which is home to the Museum’s collection of Medieval and Renaissance urban architecture. By introducing the element of wind into this naturally lit gallery, she emphasised the concept of this artificial outside space within the Museum. Walking through The Wind Portal, visitors experienced a heightened transition from an inside space to an ‘outside’ space within the gallery setting.

The Windportal installation blends in different technologies and materials, such as hand folded paper windmills, hand sculpted wooden joints, 3-D printed clips and a complex wind and light computerised system. This mix of materials, technologies and manufacturing techniques unite into one piece, that aims to represent memories and inspirations.

Different flows of wind were programmed, resulting in to different speeds, sounds and feelings. The Windportal demanded an incredible accuracy throughout its production, due to the motivation of wanting to design one of the most volatile elements of our nature.

The wind has been engineered to flow through the rods, where microscopic holes allow the wind to blow into the windmill caps. Each millimetre counted; each windmill had its defined position.  Wind and sound are the elements that make us understand our environmental context. Through The Windportal installation, shaped as a monumental gate of 8 metres high and composed of thousands of paper windmills that spin, thanks to an integrated wind system, the aim was to make our visitors feel, hear and be aware of the action of transitioning through two spaces.

The Wiindportal is a walk through installation that represents a transition space from an inside, to an outside area. Its architectural shape works as an illusion effect, which, according to the angle you are positioned from, one would perceive the gate as being closed. As soon as you approach it, the gate seems to open up. The light, which seems to play with the wind flow, gives us an impression of a breathing piece, indeed, the gate breathes in and out, where wind is its main source of life.

The Windportal tries to grasp and emphasise common emotions and senses that are often forgotten.