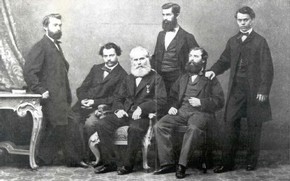 Michael Thonet (1796–1871) was born in Boppard am Rhein, Prussia, and trained as a traditional cabinet-maker. In the 1830s, as an alternative to the laborious technique of carving, he began bending wood to create furniture.

The road to success was not an easy one. Following bankruptcy and aged nearly 50, Thonet was forced to move to Vienna with his wife and five sons. It took nearly another decade to finally establish the family business, Gebrüder Thonet, in 1853.

The firm went on to mass-produce ‘bentwood’ furniture in unprecedented numbers, manufacturing up to 1.8 million pieces a year by 1912.

In 1855 Thonet made a key technological breakthrough. After years of bending laminated wood, he discovered that by attaching a metal strip along its length, solid wood could be bent in a similar way. This eliminated the costly lamination process and earned patents guaranteeing a virtual monopoly on production.

The Thonets were now ready for mass production. In 1857 they built a new factory in Koritschan in the Moravian forests (in what was then Austro-Hungary) with a ready supply of beech wood, plenty of cheap labour and access to important rail links. 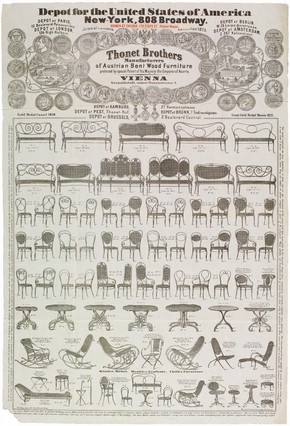 The design of Thonet furniture directly reflected its ‘production line’ manufacturing process. The making of each element was broken down into a series of individual tasks. Men did the steaming and bending, women the less arduous sanding, finishing and caning.

The firm’s key design principle was to manufacture as many chair models as possible from as few different parts as possible. These parts were then packed in boxes, for ease of shipping, and assembled elsewhere by the distributors or retailers. In this way, Thonet was able to increase production from 10,000 chairs per year in 1857 to 1,810,000 by 1913.

Gebrüder Thonet was a family affair with father and sons closely controlling every last detail of production. They also understood that mass production required a mass market.

Starting in the 1850s the firm exhibited at many international fairs and established a global reputation. They built a worldwide network of retail outlets and, from 1859, published multi-lingual catalogues showing every model, individually numbered, to facilitate orders.

Their strategy proved so successful that by 1930 over 50 million model No. 14 chairs alone had been sold. Today the Thonets are considered pioneers of both furniture design and manufacture.

Christopher Wilk, Head of the Furniture, Textiles and Fashion Department at the V&A, discusses Thonet chairs

My name is Christopher Wilk and I’m Head of the Furniture, Textiles and Fashion Department at the V&A.

These are some of the most remarkable designs in the history of furniture. The process of making these chairs was invented by a Prussian cabinet-maker by the name of Michael Thonet in a small town called Boppard am Rhein in Germany. Thonet worked for years, trying to figure out a way to make furniture from bending wood. And originally he made what looked like very traditional chairs that were made of stacks of veneers that were glued together and bent into shape. It took him decades until he could take solid wood and bend it into the form that we now recognise as the ‘bentwood chair’.

You look at these chairs and you can see the way that they are bent, they are curved. You can just imagine someone starting at one end, clamping the rod of wood into a mould and then bending it in, into these shapes.

It would have been remarkable enough if Michael Thonet had just successfully designed and made a chair from solid bentwood. But he went much further than that. He designed his own factories, the machinery to make the tools, even the screws that he needed to put his chairs together. He came up with new ways of marketing his chairs through catalogues. He set up shops all over the world, distributors all over the world, and that is something that’s truly remarkable. And Thonet furniture was sold in Africa, in Asia and the Americas.

Although once his patents for making furniture from bentwood ran out in the 1880s, and there were dozens – at one point hundreds – of companies across Europe and across the world making bentwood furniture, this form of furniture is forever associated with the name Thonet.

My name is Gitta Gschwendtner. I’m originally trained as a furniture designer and now work in a variety of design disciplines.

I’m very interested, in my work, to look at materials and how they can be used in a different way, and that inspires quite a few of my pieces. So, for me, Thonet is hugely inspirational because it’s his passion for finding a new way of mass-producing something that led him to this incredible innovation and new chair type.

Another part of my work occupies itself with archetypal forms and design. And since the Thonet chair is so incredibly archetypal, it’s something that really speaks to me.

The seating installation that you can see by the window has been designed by myself and it references six timber chairs from the gallery. My aim was to reflect important points in chair design in solid timber. And, of course, the No. 14 Thonet chair is one of the most important ones for me personally, so I therefore reference it in the installation.

It was really interesting to spend a little bit of time with the chair and measure it and take drawings from it. One of the first things that struck me was how incredibly fine it is. I really love the fact that it’s quite different from the production models that we’re familiar with today.

The Armchair No. 1 is quite a remarkable piece of furniture. Not only is it very minimal and decorative at the same time, but I also think that, through the technical way in which Thonet has joined the central back piece onto the back rest, he’s playing some visual trickery. Unless you look very closely and question how it’s made, you would just presume it’s made from one piece of rod. But in fact, of course, that wouldn’t be possible. So take a closer look.

Audio description of the Furniture Gallery's Thonet and Sons display

This display contains two European-café-style chairs, simply made from smooth, bentwood rods stained dark brown and with straw-coloured cane seats. Above them on the wall are the component pieces of a third chair. Designed in the 1850s by Thonet Brothers in Vienna, the chairs were revolutionary – mass-produced from bent solid wood as well as the more pliable laminated wood.

The chair on the right is known as Armchair No. 1 – a reference to its number in Thonet’s marketing catalogue. It’s slightly larger than its companion. Its back legs and the frame of its backrest are formed from a single solid rod, bent into a hoop like a wide balloon. It curves gently forwards – from the feet to the back of the seat and then out again to the top of the backrest. At each shoulder is a fork where the rod seems to split, these branches curving down in an S-shape for the sitter to lean against. The S-shapes are back-to-back and join in a loop above the seat. They’re made of laminate – and the frame of solid wood – although it’s impossible to tell the difference because the joins are so smooth. Each arm is also S-shaped – ending in an elegant spiral. Sitters’ hands have worn the front of the arms paler. The seat itself is formed from strips of cane interlaced over a rounded rectangular frame. The seat has only two visible fixings: behind the two points where it meets the back hoop is a single, domed-brass screw-head. The chair’s front legs, topped by a capital, splay out slightly towards the floor.

The chair on the left – chair No. 14 in Thonet’s catalogue – has a circular seat and no arms. Compared with the first chair, it’s a relatively plain design and the back hoop is tighter. Tucked just inside it is a thinner arch with a flatter curve. The front legs are a similar shape, but completely plain.

The dismembered pieces displayed on the wall make up a later version of No. 14. On the left is the chair-back. Tucked inside is an inner arch that forms part of the back, with beneath, side by side, the two front legs. On the right is the circular seat frame. Above that is a slightly smaller and thinner ring – a rail to go round the legs, a later design feature. The rail encircles a horizontal line of small screws with beneath, two larger screws, two washers and two wooden pegs. Thonet chairs were transported in pieces – packed up in crates and ready for assembly by the distributor or retailer.