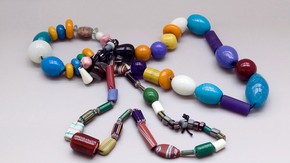 Beads, Italy, 17th and first half of 18th century, single-coloured, variegated, white and clear glass. Museum no. 4551-1901. 'As exported from Bristol for the West African slave and gold trades' , Venetian. Given by Moses Lewin Levin. Transferred from the Museum of Practical Geology.

The long history of trade between Africa and Europe is reflected in a collection of  glass beads held by the Victoria and Albert (V&A) Museum. These beads were known as 'trade', 'aggry' or even 'slave' beads (the Museum's accessions register records that many of its examples were 'made for use in the African slave trade'). They  formed an important element in early trade networks between Europe and Africa as they were made in Europe - particularly Venice, Bohemia and the Netherlands - and used in trade in Africa.

The beads were popular as glassmaking was uncommon in Africa, making them unusual and precious. They were particularly valued and sought after in West Africa, where they were often used in the creation of high-status decorative art objects, for example in the Asante (Ashanti) necklace from Ghana,
probably worn by a member of the court. 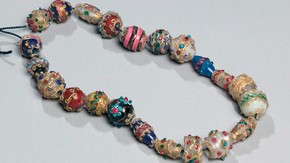 Beads, Italy, c.19th century. Gilded glass, with applied threads and dots of coloured glass. Museum no. 4553:2-1901. Given by Moses Lewin Levin. Transferred from the Museum of Practical Geology.

The beads' history dates to the 15th century when Portuguese trading ships arrived on the coast of West Africa to exploit its many resources, including gold, slaves, ivory and palm oil. At that time, glass beads were a major part of the currency exchanged for people and products. The beads proved to be a cheap and efficient means of exploiting African resources, especially as glassmaking technologies developed in Europe.

Trade beads were not of a set form but were produced according to demand, which could vary from region to region, village to village, resulting in many thousands of different designs. Some designs were particularly popular, such as the millefiore ('thousand flower') form,  which reinvented an ancient technique from western Asia to produce colourful beads formed of small cross sections of multicoloured canes fused together or embedded into a matrix. Reinventions of ancient Roman and Egyptian forms were also popular. 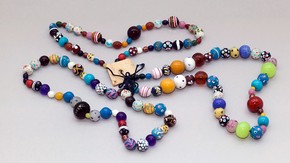 Beads, Italy, 19th century, white, single coloured and variegated glass. Museum no. 4554-1901. Italian (Venetian), made for use in trade in South Africa. Given by Moses Lewin Levin. Transferred from the Museum of Practical Geology, Jermyn Street.

The large number of people involved in the manufacture of trade beads, plus the fact that bead makers - and their designs - moved around, means that it is extremely difficult to attribute a bead to a particular place, maker or time. Some designs can be given a more precise provenance through dated sample cards, sample books or bead catalogues produced by European bead trading houses in the mid-19th to early 20th centuries, now held in museum collections.

Many of the thirty or more strings of beads held by the V&A originally belonged to Moses Lewin Levin, a London bead merchant whose import-export business operated from 1839 to 1913.

The British Museum holds the majority of the Levin Collection, including sample cards. Levin initially gave the V&A examples to the Museum of Practical Geology, located at Jermyn Street, London. This Museum was established in 1835 to illustrate 'the mineral wealth of the United Kingdom and [its] colonies' and contained examples of industrial and artistic products made from raw materials mined from the earth. Its displays included glass and ceramic ware. Some of the collections were transferred to the V&A in 1901.