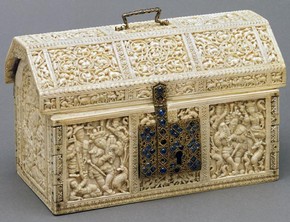 The Robinson Casket, unknown maker, Kotte, Sri Lanka, about 1557. Museum no. IS.41-1980. One of a group of at least nine solid ivory caskets made in Kotte, Ceylon (now Sri Lanka), and sent by the kingdom's rulers to Portugal as diplomatic gifts

In the 16th century, the Portuguese established a coastal trading empire that stretched from India to Japan. However, managing and policing this empire was to prove financially crippling. After 1600 the Portuguese monopoly was further undermined by competition from the Dutch and English East India companies. These leaner organisations were driven purely by profit and unencumbered by the missionary zeal of the Portuguese.

Maritime Asia was as vast as it was varied, and the response to the arrival of the subsequent waves of Europeans was correspondingly diverse. In China, Japan and early Mughal lndia, the encounter took place on Asian terms. By contrast, in coastal south India and the Indonesian archipelago, Europeans were able to dictate their terms, sometimes using superior firepower. Many of the encounters were marred by greed, misunderstanding and violence. Yet this was also a period of cross-cultural enrichment and mutual fascination between East and West.

On arriving in Asia Europeans needed to negotiate with local rulers to obtain favourable conditions for their trading activities. Such negotiations demanded an understanding of the often complex local diplomatic conventions, such as prostrating before the prince or lord and recognising his authority. Europeans also had to establish credibility with Asian rulers, who sometimes had no way of verifying that what they said was true. In order to prove their legitimacy, officials arrived with credentials in the form of a letter from their sovereign.

The presenting of gifts, ideally rare and novel products from Europe and other parts of Asia, was also central to the success of these diplomatic missions. In return, Asian rulers bestowed presents on their foreign visitors. Some even sent embassies to the West, motivated by their own desire to trade and form alliances.

The Portuguese established a presence in Asia in order to spread Christianity as well as to trade. The Pope granted the Jesuits and other religious orders the right to establish churches and proselytise in the East.

These missionaries used art to cross the language barrier. The paintings, sculpture and devotional objects that they brought with them were copied by local Asian artists, both for Christians in Asia and for export to Europe. The objects that resulted were often hybrid, marrying Christian images and symbols with those of local traditions. Conversely, Asians sometimes adopted aspects of Christian imagery even when they had little sympathy with the faith itself. 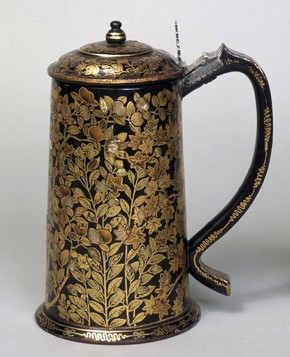 Personal relationships formed a crucial part of the encounter between Europeans and Asians. However, the degree of social and cultural interaction differed greatly from place to place.

In China and Japan relationships with Europeans were carefully controlled and the foreigners were confined almost entirely to port cities. In India and South-East Asia people were already more accustomed to the influx of foreigners. In these places Europeans mixed more freely with the inhabitants and often adopted local dress, symbols of rank and forms of entertainment. In a similar fashion, Asians who met and interacted with Europeans sometimes borrowed western customs and manners.

Early European travellers to Asia provided rich visual and written descriptions of the people they encountered and their customs. Similarly, the exotic visitors from the West aroused much curiosity in the East. Asian artists often used images of foreigners to decorate objects made for their own markets.

The fascination for the strange physical features and peculiar dress of Europeans manifested itself in different ways in South and East Asia. Perceptions and representations of Europeans also changed over time. India was more used to outsiders and images of westerners were quickly assimilated into the visual repertoire. In East Asia contact was more limited, but the appeal of the European is apparent in objects made for the ruling classes. In Japan, a taste for things foreign also became part of popular culture.

This content was originally written in association with the exhibition 'Encounters: The Meeting of Asia and Europe 1500-1800', on display at the V&A South Kensington from 23 September - 5 December 2004.