During the period 1500-1800 Asian commodities flooded into the West. As well as spices and tea, they included silks, cottons, porcelains and other luxury goods. Since few European products could be successfully sold in bulk in Asian markets, these imports were paid for with silver. The resulting currency drain encouraged Europeans to imitate the goods they so admired. In Asia, there was no comparable mass importation of western goods. However, there was a great fascination with European scientific and artistic technologies. These influenced local lifestyles and inspired Asian scholars, artists and craftsmen.

The East occupied an important place in the western imagination. The reverse was also true. European objects and artefacts, sometimes reworked to suit Asian lifestyles, created a corresponding vision of a mysterious and exotic West.

When the Portuguese arrived in Asia they encountered a sophisticated trading network centred on cosmopolitan ports. Here they found luxury goods from throughout Asia, produced by specialist workshops specifically for different markets. These goods had immediate appeal for Europeans, who began commissioning pieces suited to western tastes.

Asian craftsmen were remarkably adept at interpreting western designs and applying traditional techniques to new forms. In the 18th century, European trading companies capitalised on these skills and developed a mass market for Asian commodities in Europe. The appeal of these objects was so strong that attempts were made to imitate them in the West. The vogue for Asian goods inspired the creation of a distinctive oriental style, Chinoiserie.

Asia was not a natural market for western luxury goods, which were often unsuited to the climate and lifestyle. However, western scientific technology did have a great impact. Asian rulers and scholars developed a keen interest in European medicine, astronomy and cartography. Glassware, mirrors and precision instruments such as clocks were highly prized and transformed many aspects of Asian life. Such western goods were also copied locally, with modifications to suit Asian tastes and needs. The influence of western military technology was also particularly significant. 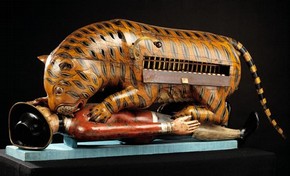 The End of an Era

In the late 18th century any uncertainty that existed about the position of Europeans in Asia evaporated. The British solved the trade imbalance with China by flooding the country with Indian opium, damaging both the economy and the health of the people. The tensions that this inevitably created led to the Opium Wars, which sealed western economic dominance of East Asia.

In India, the collapse of the Mughal empire created a power vacuum that was filled by the East India Company. Its administrative and military machine gradually reshaped the subcontinent to suit British priorities. After the defeat of Tipu Sultan in 1799, British control of the subcontinent was assured. With this, the character of the European presence in Asia changed and rigid assumptions of East and West began to replace the more fluid boundaries between different cultures.

This content was originally written in association with the exhibition 'Encounters: The Meeting of Asia and Europe 1500-1800', on display at the V&A South Kensington from 23 September - 5 December 2004.