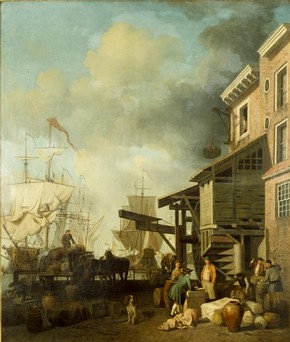 The great port of London was the headquarters of the East India Company which was established in 1600. A century later, London’s quays were handling about 80 per cent of Britains’s imports, 69 per cent of its exports, and 86 per cent of its re-exports, notably tobacco, sugar, silks and spices. Contemporaries described the Thames as a forest of masts.

Amsterdam was the capital of the Dutch maritime empire which at its height stretched from the Americas to South Africa and the East Indies, with trading posts as far afield as Japan, China, India and the Middle East. Following the victorious conclusion of the Dutch wars of independence from Spain in 1648, Amsterdam became one of Europe’s leading commercial and financial centres.

Following the Portuguese explorer Vasco de Gama’s discovery of a sea route to India in 1498, Lisbon became the pre-eminent city in Europe for Asian spices and luxury goods. Da Gama’s successors laid the foundations of the Portuguese Empire which at its height controlled trade in the Indian Ocean. In 1755 Lisbon suffered a great earthquake followed by a tidal wave and a fire which destroyed much of the city.

Bartolomeu Dias, the Portuguese navigator, was the first European to round the Cape of Good Hope in 1488. The Cape was a natural stopping point for European vessels on their way to the Indies. Cape Town was founded in 1652 by Jan can Riebeeck as a supply base for the Dutch East India Company and is the oldest city of European origin in South Africa. From 1781 it hosted a French garrison and remained under Dutch control until 1795 when it was captured by British forces during the Napoleonic wars. 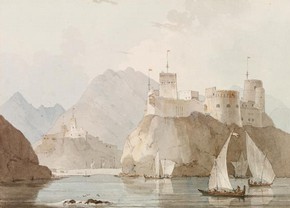 From early times, Muscat was a principal commercial centre for trade in the Indian Ocean. Its leading role was partly due to its strategic location at the head of the Persian Gulf and the skill of local shipbuilders. Control of Muscat was essential in order to dominate trade in the Arabian Sea and the city was occupied by the Portuguese from 1508 – 1650, when it came under Persian control. Omanis reclaimed the port in 1741.

At the time that Euopeans arrived there, Surat was the principal port in western India and a major centre for the export of Gujarati textiles and luxury goods. The port came under British control in 1759. In the 18th century, Surat’s harbour silted up and its trade was lost to Bombay.

Cochin, and Calicut further north, were the principal centres on the Malabar Coast for the trading of pepper. The importance of Cochin increased in the early 16th century when it became the first headquarters of the Portuguese in India. However the Portuguese lost Cochin to the Dutch in 1663, and with the collapse of the Dutch East India Company, the port came into British hands.

Madras was founded in 1639 as the East India Company’s principal settlement on the Coromandel Coast. The region was important as a centre of textile production and nearby were factories belonging to the Danish, Dutch and French east India companies. With the rise of British power in India, Madras eclipsed other European settlements in the vicinity. 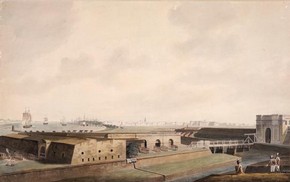 A trading post of the East India Company was founded on this site in 1690. Fort William was built in 1696 and three older villages Kalikata, Sutanati and Govindpur were purchased from the Mughal emperor in 1698 and the post was renamed Calcutta. In 1756 Siraj-ud-Dawlah, Nawab of Bengal, captured Calcutta but the city was retaken by the British under Robert Clive in 1757. Calcutta then served as the capital of British India until 1911.

Thanks to its strategic position, Malacca, a centre of the spice trade, became a critical stopping point for vessels travelling between East, Southeast and South Asia. The Portuguese conquered the city in 1511 but lost it to the Dutch in 1641.

Nutmeg and clove were indigenous to the Moluccas and control of the islands was thus essential for Europeans hoping to monopolise the spice trade. First visited by the Portuguese in about 1512, the islands came under Dutch authority in the 17th century.

The Portuguese established a settlement at Macao in 1557 and used the port as a base for trade and communication with China. Portugal returned Macao to China in 1999. 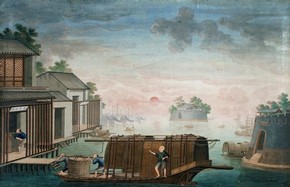 After 1759, Canton, an important port on the Pearl River Estuary, became the only place in China where Europeans were allowed to trade. Tea was the principal commodity traded here, along with silk, porcelain, furniture and other luxury goods.

Dejima was an artificial island in Nagasaki harbour, originally built to house Portuguese traders. After 1639, the Dutch were the only Europeans allowed to trade in Japan. They were confined to Dejima, where they were closely supervised by the Japanese. Dutch ships came to the island only once a year. At other times, life was quiet.

This content was originally written in association with the exhibition 'Encounters: The Meeting of Asia and Europe 1500-1800', on display at the V&A South Kensington from 23 September - 5 December 2004