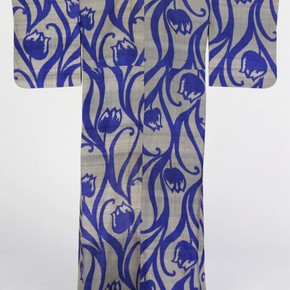 Traditional clothing from the East Asian countries of Japan, China and Korea tends to conceal the form of the body. With some exceptions, it is the surface decoration of dress from Japan and China, and the striking plain colour combinations of Korean clothes that hold our attention. There are few pleats, frills or darts to be found in East Asian dress.

A crucial point about T-shaped garments from East Asia is that the cut is closely related to the loom width of the fabric used. Kimonos from Japan, for example, are made of narrow pieces of fabric sewn together with the minimum of cutting. Nowadays the standard width for the fabric used to make kimonos is about 34cm.

Chinese robes use a wider width of fabric, which is shaped to form one half of the main body and the upper part of the sleeve. A typical Chinese loom width for a nineteenth-century man's dragon robe was around 60cm. Korean loom widths vary considerably but tend to be narrow .

East Asian garments generally open down the front. They are put on like a coat. In the past, because there was no need to pull the garment over the head, elaborate hairstyles and a range of hats were adopted by both men and women. 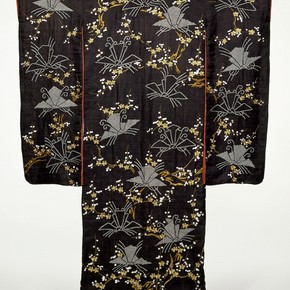 Fabric to make up a Japanese kimono is purchased in a set length called a tan. This is about 11.7m long and about 34cm wide and is enough for one garment. Two long pieces are cut from this to make up the front and back left and the front and back right respectively. A vertical seam at the centre back joins the two sections, and further lengths are folded over and seamed to the body to form sleeves. Sleeve depths vary from garment to garment.

There is no seam across the shoulders, a feature common to other East Asian clothes. The edges around the neck and front opening are bound with a straight fold of material and this completes the distinctive T-shape garment.

The kimono, literally `the thing worn', is the classic garment for both men and women. Traditionally, kimonos were worn layer upon layer. The number of layers related to the importance of the wearer; in the most extreme cases so many would be worn that the wearer could scarcely move. In reality, most women's kimonos are more intricate in structure than just described, having additional material on each side of the front opening and an extra neckband. Outer kimonos for formal wear often have an interlining and a lining. Traditionally, this lining was orangey-red in colour and curved up around the hemline so that it was visible on the outside.

This plain hem was wadded and served to weigh down the skirt so that it trailed elegantly. All kimonos are fastened with a sash called an obi which fits comfortably round the waist and under the hanging sleeves. The sleeves are not completely joined to the body at the armholes for this purpose.

Many early 20th-century kimono are made from meisen, a fabric woven from silk obtained from defective cocoons. The introduction of mechanised spinning technology meant it was possible to use this lower-quality silk to create a thick, lustrous material that was both long-lasting and relatively inexpensive. Patterned with chemical dyes using an innovative direct-dyeing technique, meisen became the fabric of choice for women's fashionable, casual kimono.

Find out more about Kimono 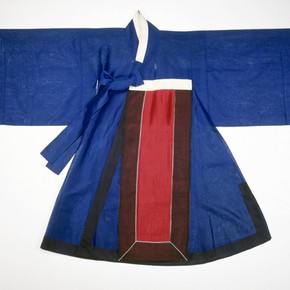 The traditional Korean coat for a man has essentially the same cut as the Japanese kimono. It looks rather different, however, because it has additional front sections as well as tapering side extensions. This gives the Korean garment a flared shape.

It is loosely fastened to the right with two long ties of matching fabric permanently sewn to the body of the garment. Inside there is a left-fastening tie.

Extra cloth is also added to make the sleeves longer, and formal garments have contrasting edgings. For court robes, a closely pleated panel is sewn to the back and a straight red coat is worn over the top.

Korean clothes are often made from silk gauze or ramie, a fabric made from plant fibre. It is easy to mistake the main seams for the small patches often added to reinforce the delicate and transparent fabric.

Historic Chinese garments share some of the characteristics of those from Japan and Korea but the outline is generally more flared and the sleeves are not so deep. This silhouette was not always the norm in China. It became prevalent when the Manchus ruled the empire and introduced their dress styles from the late seventeenth century. Prior to that, clothes had greater bulk. It was the earlier Chinese style that influenced Korean dress and is preserved in the traditional Korean coat described previously. 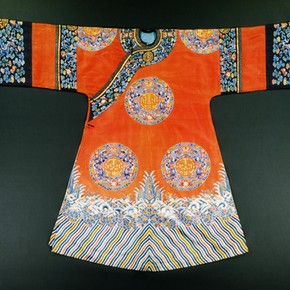 The features of the later, slimmer Chinese robe that make it distinct from other East Asian garments are the method of closure and the shape of the sleeve ends. In the later Chinese style mentioned above, robes are cut with the body and sleeve in one piece. These integral upper sleeves reach to elbow level; to make them full length additional fabric is joined on. In the case of dragon-patterned official robes, which were worn by a broad sector of the male population, the lower sleeves are in a contrasting plain dark material and are sometimes crimped or banded with gold. The sleeves end in outward-curving 'horsehoof' cuffs which match the collar band.

A Chinese robe closes securely right across the front. This is achieved by using an extra length of cloth which is seamed vertically down the centre to form a complete overlap. At the top this overlap curves down and is edged with a band that is a continuation of the neck binding. The robe is fastened at the neck, along the band and down the right side with button and loop closures

In China, garments for both men and women were generally tailored the same way. Women sometimes sported exaggerated horsehoof cuffs but usually their cuffs were straight and the sleeves looser. They wore their robes a little longer than men although they never swept the ground. Narrow woven ribbons and bias-cut embroidered bands were applied all round the edges of women's dresses.