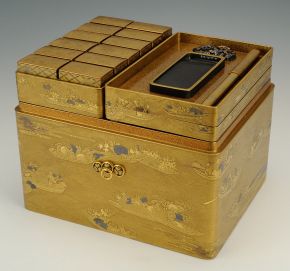 Incense, rare woods that give off beautiful smells when burnt slowly, were imported into Japan from at least the eighth century onwards. The appreciation of incense developed into a social activity by the elite classes, and during the Edo period it became more of a game. In a typical version, four types of incense are selected by the host and three of them are passed around for the players to smell. All four are then burnt in random order, and the players have to guess which is which. The players use ivory counters to indicate their guesses. The answers are revealed and the scores are written down.

The incense game involved many pieces of equipment. As well as the containers and wrapping for the incense and the ivory counters, there were special tools used to cut and handle the thin slices of rare and expensive incense. The incense was burnt in a special burner using ash and a lump of burning charcoal prepared with another set of tools. There were special boxes and trays for the ivory counters as well as an inkstone to stake ink to record the results. The boxes provided a good opportunity to display the arts of lacquer and metalwork.

Another popular amusement was the poem game consisted of 200 cards, which were kept in a decorated metal or lacquer box. Half the cards showed a portrait of one of the well-known 'Hundred Poets' and the beginning of a poem. Players had to match these to the end of the poem written on one of the other 100 cards. 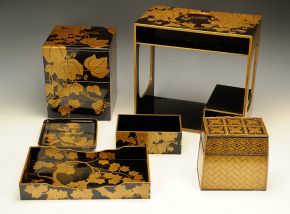 In 16th century Japan a mid-day meal was added to the routine morning and evening meals, and the picnic set probably developed at this time.

As merchants and artisans gained wealth and leisure time, picnics developed into rituals associated with certain times of year. It became a custom to put on fine clothes and take trips from the town into the countryside in springtime to view the cherry blossom, or to view the changing colours of autumn maples later in the year.

The high-status picnic set changed from being a purely practical object to being a decorative one associated with these customs. Picnic sets were often made of lacquer, consisting of a pair of bottles and small saucers for serving and drinking sake, a number of food trays and a tiered box for holding different foods. The saucers were usually stored in a drawer underneath the bottles and the different parts fitted into special sections in a carrying frame with a handle.

Each part of a picnic set often had matching decoration. One picnic set is decorated with sheaves of rice straw hung out to dry, sprouts growing in the stubble and wind-powered clappers to frighten away scavenging birds. The scene establishes the season as autumn, a popular time for rural trips, and also suggests the celebration of the rice harvest. 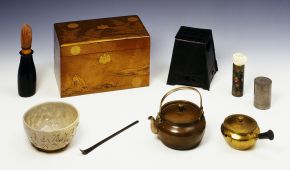 Japan is famous for the tea ceremony, a special occasion involving particular objects and rituals, which aims to create the illusion of separation from the everyday world. The host invites guests to a special room to share the enjoyment of tea and to appreciate prized tea utensils in a carefully cultivated atmosphere. It became popular among the military and wealthy urban classes during the sixteenth century, and by the 1580s participation was a standard requirement of social acceptability.

The green tea used in the ceremony is stored in a large jar in a cool place until it is needed. The tea is ground into a fine powder just before use, so that it does not lose flavour and become bitter. The powdered tea is kept in a small tea caddy with a tightly fitting lid.

The tea is placed in a tea bowl, hot water is added, and the mixture is whipped with a bamboo whisk. When the surface is slightly frothy, the tea is served to guests. Warmed rice wine called sake and seasonal food are also served from carefully selected vessels as part of the ritual. Tea ceremony objects are usually made of lacquer, ceramic, iron and bronze. 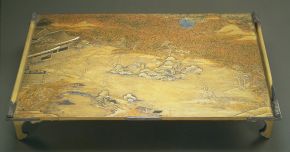 Ownership of a high quality writing set with tasteful decoration was a sign of status and refinement.

Ink was prepared by pouring water on to the inkstone with a dropper, and then grinding an inkstick into the water. The ink was applied to the paper with a variety of brushes. Other utensils might include a paper knife, or an inkstick holder to avoid dirty fingers.

All the writing utensils were stored neatly in a lacquer box, with a separate section to hold each piece in place. Writing equipment might also include a lacquer box to store the writing paper, or a special lacquer writing table.

In the Edo period it became fashionable to decorate both the outside and the inside of writing sets and paper boxes. Many of these items were quite large for lacquered objects, and provided a good opportunity to demonstrate the skill of the lacquer artist and the wealth and connoisseurship of the owner. Many scenes on lacquer writing sets are literary references to well-known stories. 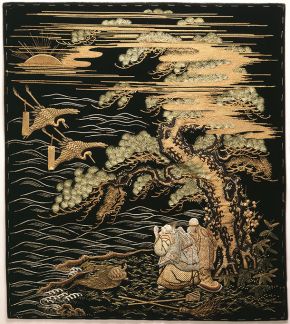 Games, writing sets and tea sets were the sort of high-quality goods that Japanese people would give each other as presents.

In Edo period Japan the exchange of gifts played an important social role, and the custom developed into a ritualised display of wealth and status.

Gifts were usually presented in a lacquer box placed on a tray of lacquer or wood. A textile cover called a fukusa would be placed over this. The fukusa would be suitably admired, and returned with the box and tray to the donor.

The choice of an appropriate cover was an important part of the gift-giving ceremony. The richness of the decoration indicated the donor's wealth, and the design was a reflection of their taste and scholarship.