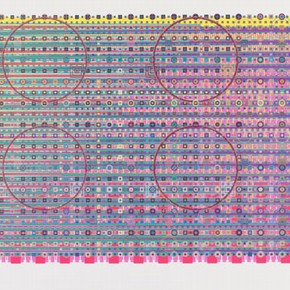 The V&A has been collecting computer-generated art and design since the 1960s, and has also acquired two significant collections: The Computer Arts Society Collection and The Patric Prince archive. Together these form the basis of the UK's emerging national collection of computer art.

The V&A's holdings range from early experiments with analogue computers and mechanical devices, to examples of contemporary software-based practices that produce digital prints and computer-generated drawings. The earliest work in the collection dates from 1952 and is a long exposure photograph of electronic beams on an analogue computer, by artist Ben Laposky.

The collection consists predominately of two-dimensional works on paper, such as plotter drawings, screenprints, inkjet prints, laser prints and photographs, as well as artists' books, from around the world. Early practitioners of computer art were working in Britain, France, Germany, and Spain, as well as the United States, Japan and South America. 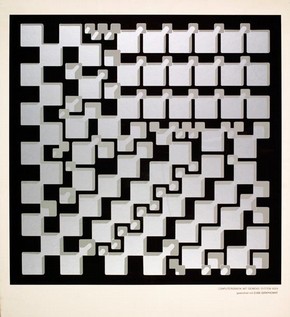 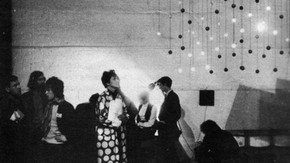 Installation view of Event One (1969) at the Royal College of Art (detail). Photo: Peter Hunot. Courtesy of the Computer Arts Society, London 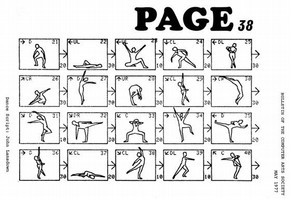 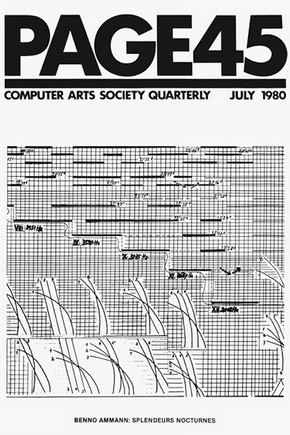 What is computer art?

Computer art is a broad term describing work made using the computer as a tool or medium, used from around the late 1950s onwards. Artists have used the computer in a variety of ways and computer art does not tend to have one particular aesthetic, although it can be understood as referring to a set of practitioners working in a particular way.

Early practitioners demonstrated an intense fascination with the new technology of the computer and worked with its core components in order to test the limits of the machine. Many of the earliest works were created using hand-written code, or bespoke equipment or software that was adapted especially for creative purposes. These artists worked with a spirit of enquiry and many seemed to welcome the chance happenings and mistakes that were a natural part of the experimental process. Although computers are now much more sophisticated, many of the early computer artists who are still practising today continue to work with the most basic elements of the computer, resisting custom-made software packages.

Although the term 'computer art' is used by some to refer to computer-based art practices in general, the term should be understood as being separate from that of digital art, which implies a much freer or more open use of technologies. Aspects such as connectivity or interactivity often play a key part in contemporary digital or new media art, but were less a part of the vocabulary of the early technology.

The Computer Arts Society attracted speakers from all over the world to come and talk at its regular meetings. As a result, artists and practitioners brought examples of their work to show other members of the group, and slowly CAS built up a collection of some of the most important and innovative computer artists of its day. In 2007, the society kindly donated its collection of nearly 200 art works to the V&A.

The screenprint Plastik 1 is the earliest work in the Computer Arts Society collection. It was produced by Georg Nees (born 1926, Germany), who is considered one of the most influential pioneers of computer art. Nees took part in an exhibition organised by the German philosopher Max Bense at the studio gallery of the Technische Hochschule of Stuttgart in 1965. It is said to be the first exhibition of digitally generated computer images.

The original computer generated image from which this screenprint derives was created using a Siemens Digital Computer 2002, a general-purpose machine that operated at an average speed of 2000 operations per second. Data would have been input and output via punched paper tape and punched cards.

A brief history of The Computer Arts Society

In 1968, the Institute of Contemporary Arts organised Cybernetic Serendipity, a ground-breaking exhibition that showcased computer-based and technologically influenced works across a variety of art forms, including music, film, graphics and interactivity. The exhibition made a strong impact on a newly emerging generation of artists and designers and raised the profile of computing in the arts.

The Computer Arts Society was established in the following months by Alan Sutcliffe, George Mallen and John Lansdown. The new Society enabled relatively isolated practitioners working with the computer across a variety of fields to meet up and exchange information on what was still a comparatively new field. It ran practical courses, such as code writing workshops and computer art programming, as well as conferences and exhibitions.

In March 1969, CAS organised an exhibition entitled Event One, which was held at the Royal College of Art. The exhibition showcased innovative work with computers across a broad range of disciplines, including sculpture, graphics, music, film, architecture, poetry, theatre and dance. CAS founder John Lansdown, for example, designed and organised a dance performance that was choreographed entirely by the computer and performed by members of the Royal Ballet School. The multi-media approach of exhibitions such as Event One greatly influenced younger artists and designers emerging at this time. Many of these artists were rebelling against the traditional fine art hierarchies of the time, and went on to work in the new fields of computer, digital, and video art as a result.

CAS established links with educational establishments, journalists and industry, ensuring greater coverage of their activities and more importantly helping to provide access to computing technology at a time when this was difficult. CAS members were remarkably ahead of their time in recognising the long term impact that the computer would have on society, and in providing services to those already working creatively with the computer. By 1970 CAS had 377 members in 17 countries. Its journal 'PAGE' was first edited by auto-destructive artist Gustav Metzger, and is still being produced today. The Computer Arts Society is a specialist group of the British Computer Society. 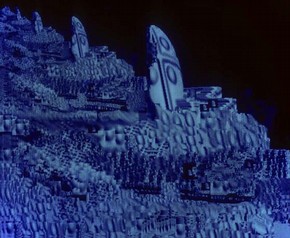 Patric Prince is an American art historian and collector of Computer Art, who followed and documented its rise from the earliest days. She was responsible for organising some of the key computer art exhibitions, including the SIGGRAPH retrospective in 1986, as well as lecturing and writing on the subject extensively. Prince's husband Robert Holzman worked for NASA's Jet Propulsion Labs in Pasadena, where computer graphics animations were being produced in the Computer Graphics Laboratory from 1977 onwards for the purposes of scientific research. Owing to the forward-thinking nature of the laboratory, and Holzman's own interest in the fine arts, artists were able to exploit the potential of the powerful equipment. In 1977 David Em was the Lab's first artist-in-residence. Whilst there he created what is thought to be the first navigable virtual world to be produced by an artist.

Over a period of years Patric amassed one of the most extensive collections of computer art, consisting of around 200 original art works, and a substantial archive charting the rise of computer-generated arts. The archive includes Patric's correspondence with artists, conference papers, exhibitions cards and catalogues, and a library of books on the field of computer art and computer graphics. The Patric Prince archive can be viewed by appointment at Blythe House.