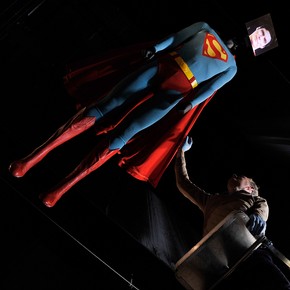 BFI’s Film Costume Archive to transfer to the V&A

On the eve of the V&A’s major exhibition, Hollywood Costume (20 October 2012 – 27 January 2013), the BFI and V&A are delighted to announce that the BFI’s collection of over 500 film costumes is being transferred to the V&A. This will establish a new area of collecting for the Museum and a closer working relationship between the two organisations. The archive of costumes will transfer to the V&A in Summer 2013.

The BFI collection is one of the largest public collections of film costumes in the world and represents the work of many major costume designers such as Edith Head, Ellen Mirojnick, John Mollo and Sandy Powell. Highlights in the collection include a silk satin wedding dress and train designed by Travis Banton for Mae West as Tira in I’m No Angel (1933), the sequinned and beaded gown with mink trimmed train designed by Edith Head for Ginger Rogers as Liza Elliot in the 1944 film Lady in the Dark, the black tasselled dress designed by Orry-Kelly for Marilyn Monroe as Sugar Kane Kowalczyk in Some Like it Hot (1959), and John Bloomfield’s 1987 Superman costume worn by Christopher Reeve in Superman IV: The Quest for Peace. 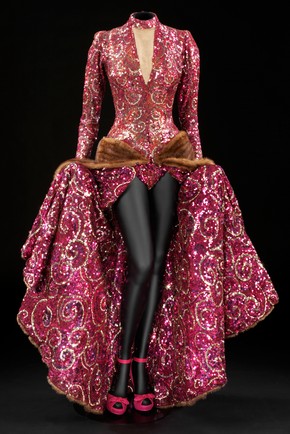 At the dinner celebrating the opening of Hollywood Costume, Paul Ruddock, Chairman of the V&A Board of Trustees, announced:

'The V&A is home to the National Collection for the Performing Arts and has one of the greatest collections of performance costume and fashion in the world. It is my great pleasure to announce that the BFI’s wonderful collection of film costumes, a number of which are on display in Hollywood Costume, will join the V&A’s permanent collections. Design for film is a fascinating subject and the transfer of the BFI’s collection of film costumes represents an exciting new area of collecting for the V&A.'

'The BFI is guardian to one of the world’s most significant collections of film and television material and we want that collection to be seen and enjoyed by as many people as possible. I have long thought there should be a national film costume collection. It’s wonderful to be able to give our nascent costume collection a new home at the V&A, another national collection with the resources and specialist expertise to ensure that these wonderful examples of the costume designer’s art will be preserved and made accessible to the public. We are delighted with the V&A’s commitment to growing this as a national film costume collection, and are excited about future collaborations tying in with our amazing collections of original costume designs, posters, papers and, of course, the films in which they are all brought to life.'

The BFI costume collection was assembled over a 20 year period from 1980 to 2000 by the Museum of Moving Image, an arm of the BFI which no longer exists. The costume archive will join the V&A’s renowned collections of fashion and stage costumes and will enable the Museum to present the full range of some designers’ work across theatre, music performance and now film. The majority will be housed and accessible at the V&A’s site in Olympia where the new Clothworkers' Centre for Textile and Fashion Study and Conservation will open at Blythe House in October next year. Highlights from the BFI archive will go on display in the V&A’s Theatre and Performance galleries.