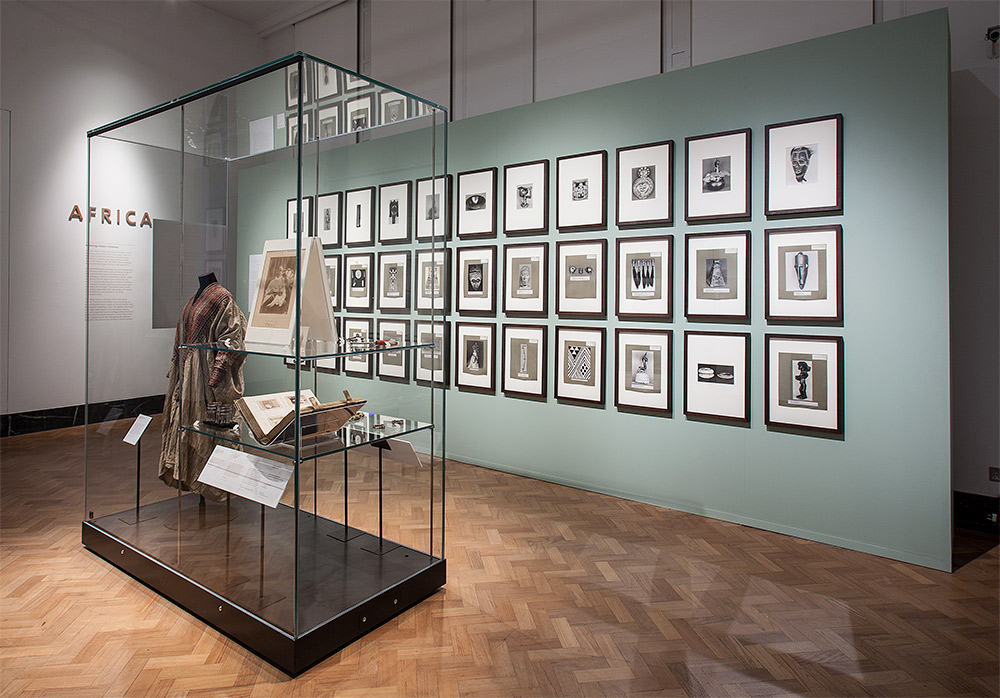 The V&A has collected African objects since its inception and has been active in representing African heritage of the Diaspora, giving prominence to projects related to Black identity in the UK. V&A's activities relating to collecting and showcasing African art and heritage have included training and exchange, displays and exhibitions.

As outlined in the V&A Collections Development Policy 2010, the V&A intends to concentrate collecting African and African Diaspora art and design in fields such as 20th-century and contemporary design, graphic arts, photography and performance arts. Redeveloping the ceramics galleries enabled the opportunity to display the work of artists such as the contemporary Kenyan potter Magdalene Odundo, and Michael Cardew, a British potter working in Nigeria.

V&A Africa: Exploring Hidden Histories (15 November 2012 - 3 February 2013) built on Museum-wide research (originally supported by the Heritage Lottery Fund and the Arts and Humanities Research Council) to present an account of the V&A’s collections of art and design from Africa. Many of the exhibits – including jewellery, textiles and sculpture – had never been on on display in the Museum before, and the stories behind them chart the V&A’s changing attitudes to African cultures from the 1850s to the present day. There were a number of events associated with the display including gallery talks and an ‘Arts of Africa’ study day.

Other recent exhibitions have included Figures and Fictions: Contemporary South African Photography (April to July 2011); this featured works by some of the most exciting and inventive photographers living and working in South Africa today. The exhibition presented the vibrant and sophisticated photographic culture that has emerged in post-apartheid South Africa, responding to the country's powerful rethinking of issues of identity across race, gender, class and politics.

This exhibition has enabled V&A curators to research and develop the V&A collection of contemporary photography from Africa, which currently includes work by photographers such as David Goldblatt and Ernest Cole from South Africa, and Seydou Keita from Mali.

The display of Ethiopian Sacred Art in 2010 showed a number of beautifully illustrated sacred texts from the V&A’s collection of Ethiopian manuscripts which date from the 16th to 19th century alongside Ethiopian crosses, rich in iconographic content and demonstrating the Ethiopian style.

Uncomfortable Truths in 2007 commemorated the bi-centenary of the parliamentary abolition of the British slave trade. Under the umbrella title of Uncomfortable Truths , the V&A held a number of activities, an exhibition, display and gallery trail throughout the year. This included the exhibition, Uncomfortable Truths: The Shadow of Slave Trading on Contemporary Art, which showcased the works of eleven international contemporary artists, and went on to be shown at two other UK museums. Asante Goldweights also in 2007 featured small, late 19th-century brass goldweights and scales from Ghana and marked two important anniversaries: 200 years since the Parliamentary Abolition of the Slave Trade, and 50 years of Ghanaian independence.

In 2011 the 2009 Jameel Prize exhibition tour went to Casablanca as the first African venue for a V&A exhibition.

Exchanges and training are an engaging way for curators and museum staff to share skills and knowledge, and increase accessibility and understanding of museum collections.

Figures and Fictions: Contemporary South African Photography has offered V&A curators the opportunity to research and develop contacts in South Africa. Sipho Mdanda, Curator of the Freedom Park, South Africa, participated in a curatorial exchange scheme at the V&A in 2008. The scheme was designed by the South African Department of Arts and Culture and the UK Department for Culture, Media and Sport.

In the same year the V&A's Middle East Section welcomed Iman Abdulfattah, Assistant to Dr Zahi Hawass, Director of the Egyptian Supreme Council of Antiquities, Cairo, to visit the museum to learn more about its practices in storage and display.

In partnership with the Centre for Transnational Art, Identity and Nation at Chelsea College of Art, AHRC Collaborative Doctoral Student Nicola Stylianou researched the collecting of African textiles by the V&A in the period 1852-2000.

The V&A has continued to offer vibrant events that consider the relationship and movement of people and objects between Britain, African and its Diaspora through events such as Black Heritage Season, including curator led talks, gallery tours, creative learning workshops, film screenings, music and performance.