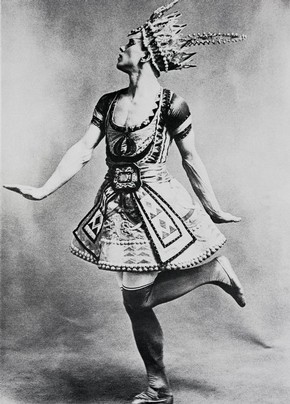 Vaslav Nijinsky (1889 – 1950) was born in Kiev and trained at the Imperial Ballet School. He caused a sensation from his first public performance at the Maryinsky Theatre in St Petersburg in 1907

He became part of Sergei Diaghilev’s circle and his lover. In 1909 he travelled to Paris with the Diaghilev company. On the first night he danced the Favourite Slave in Fokine’s ballet Le Pavillon d’Armide. He was so excited by the audience’s enthusiasm that at the end of his solo he jumped off stage and was still travelling upwards as he reached the wings.

He became the darling of French society – and the slave’s black choker became the height of fashion. He was feted like a rock star and his dresser used to sell petals from his Le Spectre de la Rose costume to his fans.

In 1911 Nijinsky was dismissed from the Russian Imperial theatres, allegedly for a breach of discipline. Many believe that Diaghilev engineered the incident so that Nijinsky would be free to be the star of his permanent company.

Nijinsky succeeded Fokine as Diaghilev’s choreographer. His work was controversial. In The Rite of Spring his dancers stood with feet turned in rather than the usual turnout position and moved in asymmetric groups. In L’apres Midi d’un Faun the dancers moved as though on a Greek frieze, in profile to the audience. Nothing like it had been seen before.

In 1913 Nijinsky fell in love with and married Romola de Pulsky. In a jealous rage Diaghilev sacked him. Nijinsky tried to start a company in London but after only a week he became ill, unable to cope with the stresses of performance and running a company. Tragically, by 1919 he was so mentally disturbed that he never danced again. He died in England in 1950.

Nijinsky became a 20th-century legend. His wife’s biography was a bestseller, Hollywood filmed his life, ballets have been choreographed about him and a racehorse was named after him.