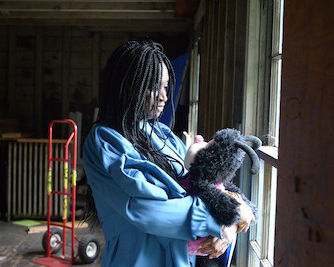 Nigerian-born, New Jersey-based artist Marcia Kure was in residence in our larger Sackler Centre studio for a shorter, three month residency from January 2014. Represented by the Susan Inglett Gallery in New York, past works have seen Marcia explore themes such as female identity, hip-hop culture, and Victorian and historical fashion. Marcia has had solo shows in Nigeria, Germany and America, taken part in numerous residency programmes and was awarded the Uche Okeke Prize for Drawing and Smithsonian Artist Research Fellowship in 2008.

Marcia used her three months in the Museum to prepare for a solo exhibition that she is staging at the Purdy Hicks Gallery later in 2014. She had regular sessions at the Clothworkers Centre to research textiles, dress and patterns, and also visited the Museum of Childhood regularly to research children’s clothing. 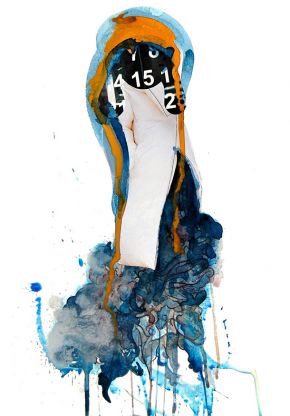 The Mask and the Saint (Image IV), © Marcia Kure

'What do you want to be when you grow up?'

If we took our childhood answers at face value, we would expect the world to be filled with princesses, astronauts, firemen, marine biologists and pop stars. During my residency I will explore the idea that childhood dreams, imaginations, conflicts and disappointments are all brought to bear in adulthood, and play a critical role in our understanding of who we are. Influences that are given to us in childhood – clothes, objects, places, ideas, and examples – need to be assembled into our adult lives and we need to decide how we can conform to the larger picture while still holding on to something we call ourselves. Using clothing to construct identities, the aim of my residency will be to figure out the cuts, patterns, colours and designs of clothing, in a way that mimics the way that adults deconstruct and reconstruct themselves in new and varied arrangements.

I hope that the information gleaned from the research at the Museum will be used as source materials for the work that will constitute my exhibition, Conformity, at the Purdy Hicks Gallery, later in 2014. The materials I will gather – patterns, colours, garment textures, types of decorative embellishments – will be used to create new forms of child-like garments that are un-wearable and illogical. From these I will also create watercolour paintings, collages, sculptures and installations.

It is exciting that my residency will offer me the rare opportunity of working alongside curators and archivists as I conduct my research, and I am also looking forward to sharing my work and ideas with the V&A’s visitors during my open studios.

Supported by the African Arts Trust