What is a Watercolour? 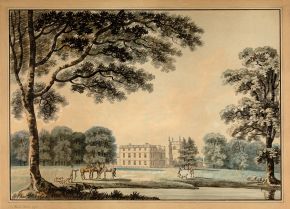 Watercolour paint is made by mixing pigments with a binder, usually gum arabic, and then applying it with water to a support such as vellum (fine animal skin) or paper. The water evaporates and the binder fixes the pigment to the support. Watercolour was used long before the development in the 1750s of the British watercolour tradition. In mediaeval times, artists illustrated the vellum pages of hand-written books with brightly coloured paintings in watercolour. When the invention of printing in the late 15th century affected demand for such expensive books, some artists experimented with painting separate works of art. The separate portrait miniature was one such development.

It can be difficult to relate such minutely painted and highly coloured images on vellum, to the larger, lightly washed 'tinted drawings' on paper of the 18th century. The difference can be explained by the amount of gum used to bind the pigment and the amount of water used to spread the paint mixture onto the support. Both factors affect the appearance of the finished work. For example, the first portrait miniaturists used a lot of pure pigment bound with only a little gum and applied with little water. The finished effect is dense, colourful and bright. While in the 17th century, miniaturists toned down pigments by adding white, and creating more natural, opaque tones.

In contrast to both approaches, when a small amount of pigment is mixed with a lot of gum, and applied with a lot of water, the pigment is less dense and so the paint becomes transparent. This allows the painting support, such as white paper, to shine through the paint. All these techniques are effectively 'watercolour', but the last was the basis of the British school of watercolour which developed from the 1750s.

Explore Watercolour in Search the Collections