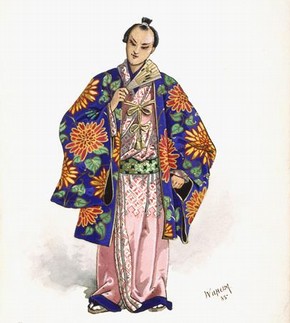 Costume design for a Japanese Gentleman in Gilbert and Sullivan's comic opera 'The Mikado' Design by Wilhelm Savoy Theatre, London 1885 Museum no. S.101-1991

Born William Charles Pitcher in England, 1858, Wilhelm was one of the most prolific stage designers of his day. He worked on nearly 200 productions including pantomimes, musical comedy, Shakespeare, burlesques, ballets, light opera and plays, and raised the standards of design in popular theatre. His designs showed the realistic style at its best, as heightened reality not unimaginative depiction. His favourite subjects however were those that needed a poetic interpretation, especially historical and fantastical, and he lamented that the public preferred realism!

For 20 years before World War I he was (in all but name) artistic director of ballet at the Empire Theatre, London. He wrote the scenarios and co-ordinated choreography, music and design into a coherent whole, ahead of similar concepts by the great choreographer Michael Forkine at the Diaghilev ballet.

Wilhelm had great taste and his costumes were designed with strong attention to detail, always made from the finest materials and beautifully finished. His designs seem superficially charming, but are actually very practical, perfectly depicting in watercolour the fabrics he wanted the makers to use as well as indicating the character for which the design was intended.

Colour and the stage picture 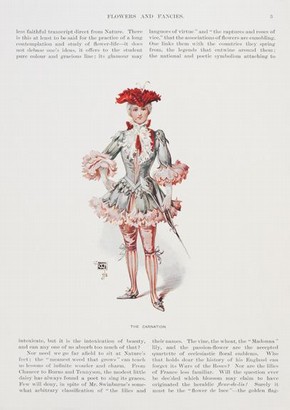 Costume for a Page, based on a carnation, designed by Wilhelm, reproduced in The Magazine for Art, date unknown

Wilhelm had a highly developed sense of the overall stage picture. He would expand a main colour theme into variants of that colour, creating elaborate harmonies and then adding contrasts. ‘The whole process', he wrote, ‘resolves itself into the production of certain sequences, combinations, effective backgrounds, and so on, and the members of the corps de ballet, etc, become convenient units in the development of the scheme'.

Colour and shading had to allow for the ‘furnace-glare’ of the limelight from every direction, which could drain colour from the costumes. He knew the importance of texture, especially in monochromatic effects: in the pantomime 'Dick Whittington' in 1892, audiences ‘saw’ twenty shades of blue where there were only four: ‘The two usually associated with Persian faience, and two intermediate ones to lead up to the ivory highlights.Of course, there are many interchanges with silver and gold, and by the additional introduction of the costliest brocades, with silks, satins, plushes, gauzes, beads, and jewels, I obtain a desirable effect of variety of sheen of fabric.

Wilhelm showed his understanding of different fabrics and how they related to a particular design in this article for 'The Magazine of Art'.

About making flower costumes he wrote: 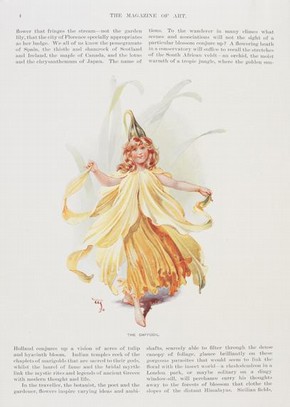 ‘The prettiest fancy possible - on paper, is worth but little unless it be backed up by a very practical acquaintance with the adaptability and limitations of the various fabrics... A combination of colours that is not only perfectly permissible, but wholly admirable, in associated flowers... becomes quite a vexed question of possibility when one has to deal with the very different texture of silken or other fabrics to represent the desired effect... the ingenuity of the designer and costumier has to be called into play to supply a method of representing the flower... in some fabric that will convey an impression of the delicacy, it may almost be the flimsiness, of the original. But how is one to replace, or at least to simulate, its buoyancy, its vitality? Fine wire... proves a very inadequate and untrustworthy substitute’

Texture was important here too. Velvets were used to imitate the bloom and colour of pansy and wallflower, whilst the sheen of satin was perfect for lilies, and silks and gauzes were good for ‘blossoms less formal and severe...‘.

The combination of fabrics could be complex and subtle. In making the daffodil costume for example, the trumpet was fluted satin, with silk of a paler tone for the outer petals. The ‘pepper-castor’ headdress was of green satin and supported a brown silk crepe veil ‘which supplied a familiar feature of the flower-stalk, and went far to complete the resemblance to the original'.

He explained how it was especially difficult to match the ‘graceful informality’ and 'twists and turns' of various flowers and leaves, which led to experiments in cutting and seaming, while special effects required specially dyed and woven materials: 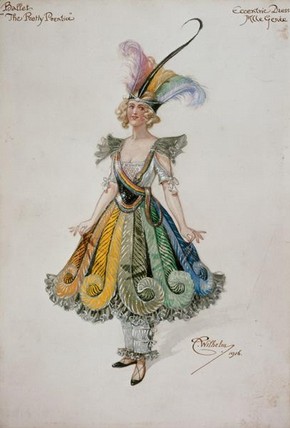 '...though the brilliance of the natural hues can only be approached, some very creditable successes have been achieved by a combination of various crafts, working together in harmony and controlled by a fixed plan of campaign.'

Wilhelm admitted that realism could be taken to extremes, but he felt that designs should at least convey a sense of atmosphere and place.

His aim was ‘a completeness of ensemble and pictorial effect'. Everything had to have its roots in reality and ‘had to be perfect at close quarters, down to the finest embroidery and the last button'.

For him, the designer was ‘certainly the most important factor in a theatrical production of artistic pictorial pretensions'.

‘It cannot... be too distinctly set on record that the success of the stage picture, grouping and background - depends on its initial conception as a whole and this must undoubtedly emanate from one brain.'

Here, a comparison of the dress with the original design shows how Wilhelm’s watercolour technique suggests the different fabrics to be used. The execution of the costume into silks, taffetas, sequins and silver gauze creates a lavish yet not overpowering costume, which uses colour and wit to conjure up a lively, mischievous character, very suited to the talents of the dancer Adeline Genée, for whom it was created. The extravagance of the costume is staggering considering that this was only one of several dresses worn by Geneé in a short ballet.