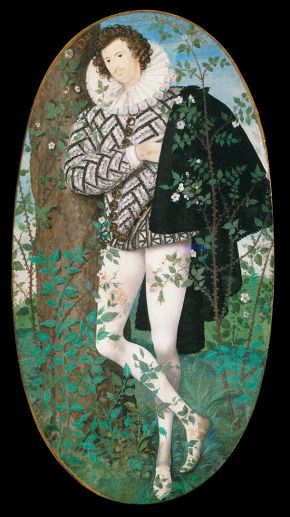 Nicholas Hilliard's 'Young Man Among Roses' has come to epitomise the romantic vision of the sonnet hero of Shakespeare's England. Tall, with handsome features, curly dark brown hair, and an incipient moustache, he leans with his hand on his heart against the trunk of a tree encircled by a bush of white roses.

We know nothing of the miniature's history until the first decade of this century but since its entry into the Museum in 1910 it has come to be recognised not only as one of the most enigmatic of images to come down to us from the age of Elizabeth I but as the chef d'oeuvre of its greatest painter, Nicholas Hilliard.

The artist, Nicholas Hilliard (1547-1619), was a man of Devon and the founder of the British School of miniature painting. The art of the Elizabethan miniature, which he created, and of which the greatest collection is here in the V&A, was fashioned in the main by three influences each reflected in the 'Young Man'.

The first of these was the portrait art of Hans Holbein, who, in his last years in England, had learned to paint minatures. 'Holbein's manner of limning', Hilliard wrote, 'I have ever imitated, and hold it for the best.' From Holbein's late style Hilliard developed the flat, linear, two-dimensional aesthetic which was to be the hall-mark of Elizabethan painting. Hilliard was miniaturist to the Queen and she too had very pronounced views on the art of portraiture. When she sat Hilliard describes how she placed herself, like the 'Young Man', 'in the open alley of a goodly garden' so that the light should be an open, even and direct one without any use of dramatic 'chiaroscuro'.

The 'Young Man' has in addition a sinuous sophistication which was influenced by something else. For two years Hilliard worked in France. During that period he moved with assurance in the brilliant artistic world of the last Valois King, Henry III. The elegant pose of the Young Man is directly derived from figures Hilliard had seen in the frescoes and plasterwork of the great palace of Fontainebleau and he was painting this miniature in the aftermath of the Queen's long romance with Francis, Duke of Anjou, her 'Frog'. The 'Young Man Among Roses' distils the francophile atmosphere of the Tudor court in the 1580s.

Elizabethan miniatures are painted in watercolour on vellum which has been mounted onto card, often a playing card. Normally they are much smaller, made to be kept in little, turned ivory cases in drawers, in cabinets or to be set into jewelled lockets and worn. They were often expressions of amorous dalliance, votive images given by a knight to his lady in pledge of devotion. And the 'Young Man Among Roses' is precisely this, a declaration of love. 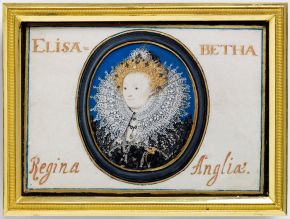 A device in picture

'An Impress (as the Italians call it) is a device in Picture with his Motto or Word, borne by Noble and Learned Personages, to notify some particular conceit of their own.' So writes the chronicler, herald and antiquarian, William Camden, of the contemporary passion for personal emblematic allegories.

What were these 'imprese'? They were a combination of word and pictured image aimed at expressing the bearer's personal ideals and dilemmas. Unfortunately for us they were meant to be puzzling and obscure, for, to the Renaissance mind, such 'imprese' should be understood only by those whose intellect was sufficient to fathom their meaning. The Queen led the fashion by surrounding herself with the most elaborate symbolism in her portraiture, pageantry and in the poetry celebrating her rule. It was the deliberately created intellectual language of an 'in-set'.

The 'Young Man Among Roses' belongs to this world. It is such an 'impresa', a statement of the aspirations of this love-lorn gallant in the language of Elizabeth's court. We need to study every detail of dress, attribute and motto in order to understand the message of the miniature. The white roses, the tree, the black and white costume and the Latin motto, 'Dat poenas laudata fides' (My praised faith procures my pain), speak to us in a lost language, that of Renaissance symbolism.

The roses which entwine the 'Young Man' are single, five-petalled roses, known to the Elizabethans as the eglantine. Roses, of course always alluded to the Crown, the Virgin Queen in whose blood mingled the white rose of York with the red of Lancaster. Eglantine even more than the rose was celebrated as her personal flower. The poetry and court pageantry of the reign is garlanded with symbolic eglantine. Sometimes she appears in her portraits flanked by branches of Tudor roses balancing branches of eglantine.

At a tournament held on her Accession Day, November 17th, in 1590, a column was erected in the tiltyard of Whitehall Palace entwined by eglantine. Five years after George Peele exhorts her subjects to celebrate the same day bidding them :

... Wear eglantine,
And wreaths of roses red and white put on In honour of that day.

The 'Young Man' is declaring his secret passion, therefore, for the Queen. We gather this also from the colours he wears, for black and white were ones personal to her, worn symbolically in her honour as tributes to her constancy and chastity. A rival courtier to the 'Young Man', Sir Walter Raleigh, was painted at about the same time also in black and white, but his dress in addition is scattered with virgin pearls and a crescent moon nearby alludes to his worship of his mistress as Cynthia, Lady of the Sea. Of the young man's constancy there is no doubt, for the tree is a common emblem of steadfastness. The motto at the top of the miniature comes from a half verse of a famous speech out of the Roman poet Lucan's 'De Bello Civili'. Ben Jonson translates the passage as:

... a praised faith
Is her own scourge, when it sustains their states
Whom fortune hath depressed.

The reference is to Pompey the Great, with whom the 'Young Man' is, by inference, identifying himself. The Elizabethans were most familiar with Pompey through Sir Thomas North's translation of Plutarch's 'Lives', which Shakespeare used as a source for his Roman plays. Pompey was a great military commander, a general at the age of 23, awarded two Roman triumphs by 25, besides being a popular hero. All the evidence points to the sitter being a very young courtier (his moustache is just sprouting) with military ambitions who, at the same time, was sustaining a platonic affair with the Queen. In 1976, when this article was first published, Roy Strong (Director of the V&A) argued that at the close of the 1580s, when this miniature was painted, only one person satisfactorily met all these demands, Robert Devereux, 2nd Earl of Essex. 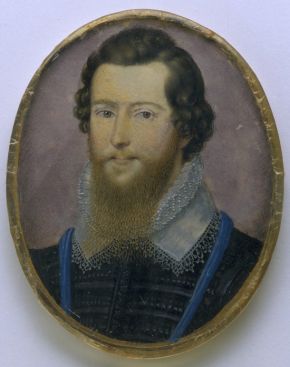 Robert Devereux, 2nd Earl of Essex, was the eldest son of Walter Devereux, 1st Earl of Essex and his wife, Lettice Knollys. His father died in 1576, after which his mother incurred the Queen's wrath by marrying her favourite Robert Dudley, Earl of Leicester. For this Elizabeth never forgave her. In 1584 Essex was just seventeen and his mother, in an attempt to placate the Queen, induced him to come to court.

Elizabeth was immediately attracted to this glamorous youth who, shortly after, left as General of the Horse to fight in the Protestant cause in the Low Countries. There he befriended Sir Philip Sidney and so close did they become that Essex promised Sidney on his deathbed, after the battle of Zutphen, to marry his widow. This he did shortly after his return to England but, like his mother's marriage, it was kept secret from the Queen.

For three years, from 1587 to 1590, Elizabeth never knew that her new favourite was a married man. During the summer of 1587 Essex was decisively established as her constant companion and, following the formula already laid down by his predecessor, Raleigh, he began to live out a platonic affair with her. To this period the miniature belongs. It reflects the poetry he wrote about the relationship:

Love no more since she is gone!
She is gone and loves another.
Having been deceived by one,
Leave to love, and love no other.
She was false, bid her adieu;
She was best, but yet untrue.

Later in his career, when he fell from favour, Essex dramatised himself as the bee no longer able to dwell upon the Royal Eglantine. And, of course, as successor in the public eye to Sidney, the Shepherd Knight, and as the exponent of a vigorous military policy against Catholic Spain, the role of Pompey suited him exactly. The Earl deliberately cultivated an image, in the words of Edmund Spenser, as 'fair branch of honour, flower of chivalry'.

If indeed the 'Young Man Among Roses' is Essex, it is the Earl at an unfamiliar period of his life, long before he grew his beard in 1596. The portrait evidence to support his identification is limited and the viewer must draw his own conclusions. The earliest certain portrait of Essex depicts him about three years after the Young Man in 1590 still with elements of a baby face, slightly more moustache and his hair differently dressed.

And there is another Hilliard miniature which may also be Essex. The dates are exactly right, for it depicts a man aged 22 in 1588. These suggest but do not absolutely prove the identification to be correct. In the final analysis, although such proof would heighten the portrait's interest, it would add little to our appreciation of this supreme evocation of the Elizabethan Arcadia.

Written by Roy Strong, Director of the V&A, 1976 and published in the V&A Masterpieces series.
Revised 2006. This article was based entirely on the study of this miniature in Roy Strong, 'The Cult of Elizabeth' (published in 1977).