'You Know, You Cannot See Yourself So Well as by Reflection' 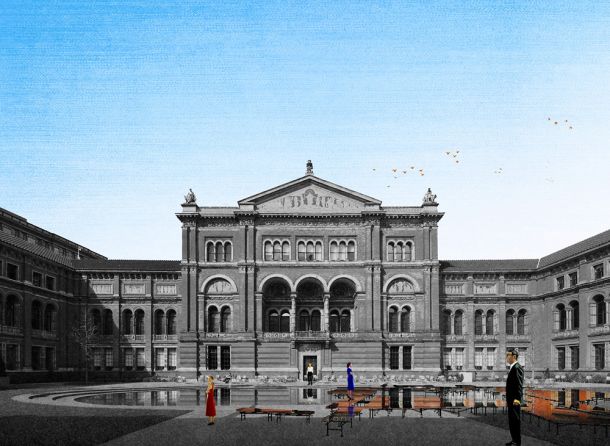 Welcome to the V&A’s summer pavilion, created for the London Design Festival at the V&A by Mexican architect Frida Escobedo to celebrate the Year of Mexico in the UK.

The pavilion is a temporary structure that overlaps two very different landscapes — both physically and conceptually — and aims to spark discussion about identity and cultural exchange.

Made up of a series of mirrored platforms, laid out in a grid-like pattern, the pavilion references one of Mexico’s most emblematic territorializations: the ancient Aztec city of Tenochtitlán. This early city was built on a lake in the early 14th century, and its channels, streets and ‘chinampas’ can still be recognized in the urban structure of today’s Mexico City.

As Octavio Paz once pointed out, ‘the past reappears because it is a hidden present’. Mexico City´s fragmented and stratified nature does not hold on to the past, but instead is based in what is still alive or capable of staying alive in the everyday life. The city materializes the continuous flow of additions, subtractions and reorganizations of social life and collective identity.

The mirrored platforms of the pavilion act as a liminal zone. On the one hand they occupy and appropriate their surroundings, whilst on the other they reflect and blend in with them.

The title is a reference to both the physical reflective nature of the installation – and its philosophical inspiration. ‘You know, you cannot see yourself so well as by reflection’ is a quote from Shakespeare’s Julius Caesar, Act 1 Scene 2.

This short video captures the pavilion being installed over 3 days in the John Madejski Garden.

This video contains no spoken word. 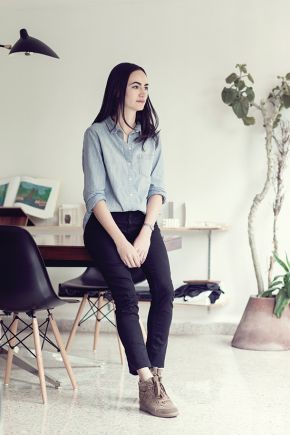 Frida Escobedo (b. 1979) has a degree in architecture and urbanism from the Universidad Iberoamericana in Mexico City and since 2006 has been working as an independent architect. Recently she finished her Masters in Art, Design and the Public Domain at the Harvard Graduate School of Design. In 2003 she founded with Alejandro Alarcón the studio ‘Perro Rojo’. In 2004 she received the Scholarship for YoungCreators in Mexico and in 2008 was a winner of the Young Architects Forum by the Architectural League in Nueva York. From 2007 to 2010 she was teaching at the Universidad Iberoamericana in Mexico City. In 2012 her work was represented in the Mexican Pavilion at the Biennale in Venice and at the Mission Cultural Center for Latino Arts, in San Francisco. Of the work Frida said:

‘The pavilion is an abstraction of this first settlement in the lake: a mirrored system of platforms that resembles the city’s grid and the sheen of the water as it was first described by Cortez’s men. The platforms can be arranged in different configurations, making it a dynamic and flexible space that adapts to a number of events. The reflective surface integrates the pavilion with its surroundings, becoming a link between past and present, between context and a new common territory.'

Escobedo’s work was selected from a shortlist of submissions by four distinguished Mexican architects and designers.

The installation will remain in place throughout the London Design Festival, before closing on 3 October 2015.

A V&A and London Design Festival project, with support from the government of Mexico