The Fabric of India: Nature & Making 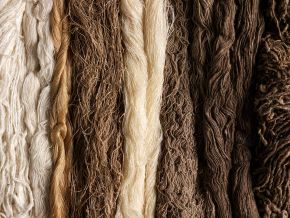 India’s rich natural resources for making and decorating textiles are unrivalled. Its varied geographical regions and climates provide a huge range of plant fibres and natural dyes for the cultivators, weavers, dyers, printers and embroiderers of the subcontinent. Over centuries, most regions developed specialities based on local resources, such as the golden silks of Assam, the fine cottons of Bengal, or the red dyes of south-east India. Craftspeople use an astonishing range of skills to process raw materials and produce regionally distinctive dyes, weaves, prints and embroideries. 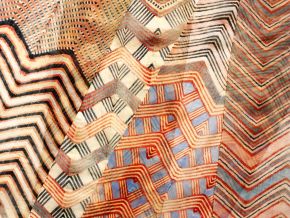 India’s natural dyes, especially those for blue and red, have been renowned for millennia. Blue dye was so closely associated with India that the ancient Greeks took its western name – indikos (indigo) – from the country itself. Red dyeing with fixing agents (mordants) was known to the Indus valley civilisation by about 2500 BC. Fixing the colour is the great challenge of dyeing cloth. Indian dyers’ use of mordants was key to their expertise, which was unrivalled until the invention of western chemical dyes in the 19th century. It is this wealth and mastery of bright and lasting natural dyes that perhaps best distinguishes India’s textile heritage.

Derived from the leaves of shrubs in the Indigofera family, indigo dye has been used for millennia in most regions of India to colour yarn and fabric (especially cotton) in shades of blue. Indigo is a substantive dye, fixing without the help of a mordant, but requires expertise to successfully prepare and use. The process was demonstrated for the V&A by the Cheepa family, indigo dyers living and working in Kala Dera, Rajasthan. 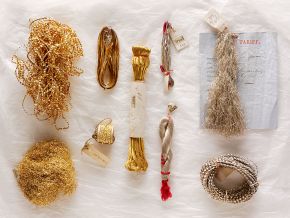 Cotton and silk are the raw materials most associated with Indian textiles. India supplied cotton cloth to the world for centuries, as well as producing an astonishing variety of hand-made cotton fabrics for domestic use until industrialisation changed how cottons were made and sold. India’s wild and semi-domesticated silks (quite distinct from that of cultivated mulberry silkworms) continue to provide a huge range of yarn and fabric for local use. Other animal fibres used to make textiles include sheep’s wool and yak- and goat-hair. Finished textiles are also often decorated with natural products – insect wings, mica and cowrie shells. Silver and silver-gilt, manipulated into thin ribbons and fine threads, is also used in weaving and embroidery to give extra glitter and richness to cloth.

Cotton cultivation in India may go back as far as 9000 years, and is still an integral aspect of the Indian economy. Today, India, Pakistan, and Bangladesh together grow enough cotton annually to provide every person on the planet with over one kilogram each.  The production of this invaluable natural resource has always relied on the skill and labour of individual farmers. This footage follows the story of cotton farming in South Asia from planting to harvesting.

Courtesy of the Better Cotton Initiative

Unlike the wholly-domesticated Bombyx mori silkworm, which is raised totally indoors and feeds solely on mulberry leaves, India’s ‘wild’ silk moth species are only semi-domesticated. Native to eastern and central India, they must be partially reared outdoors where they have access to a variety of trees in which to live, eat, and spin their cocoons. Tasar silk is one of the most widespread of India’s ‘wild’ silks, but is most plentiful in the states of Odisha, Bihar and Madhya Pradesh. The footage below explores how cultivators must cooperate with nature to cultivate this ‘wild’ silk. 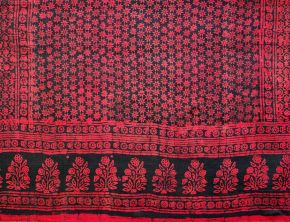 In India, printing patterns with wooden blocks is mainly associated with the north and west. Dress fabrics used small repeating floral patterns in several colours, requiring multiple blocks. Larger-scale motifs were printed for furnishings and tents. From the 14th century, if not earlier, western India used large blocks to produce huge wall hangings, which were exported to South East Asia. While printing was not strongly associated with south India, it eventually replaced hand-drawn kalamkari (‘pen work’) there in the 19th century.

An integral step in the block-printing process takes place before any textiles are involved. The carving of a printing block is in itself a highly skilled practice, requiring a team of craftspeople specialising in different stages of the process. The V&A filmed this process step by step, as craftsmen at Yaseen Wooden Block Makers in Jaipur, Rajasthan, turned a plank of wood into an intricately carved printing block. 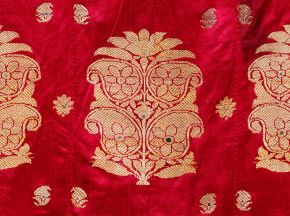 Each part of India has its own weaving tradition, but Gujarat was the main centre of innovation for more than 500 years. As Gujarati weavers migrated, weaving techniques and technologies spread all over India. The simplest type is plain weave, in which the weaver runs a weft thread evenly over and under a fixed set of warp threads. More complex weaves derive from this basic method. Looms in India ranged from the simple back-strap loom to complex draw-looms on which velvets and patterned silks were woven. Their use declined with the rise of the mechanised Jacquard loom in the 19th century.

Rajasthan Khadi Sangh is a weaving cooperative in Kala Dera, Rajasthan. There, cotton is spun and woven by hand using traditional tools and equipment to make cotton khadi cloth. Handmade textiles, are still a significant part of the Indian economy, providing work to millions. The V&A visited Rajasthan Khadi Sangh to watch how they turn cotton into plain-woven cloth. 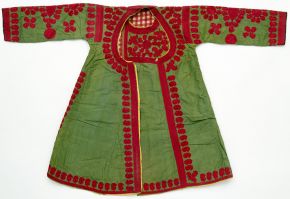 India’s embroidery is almost as famed as its weaving and dyeing. Specific regional styles have developed over centuries, using a huge variety of stitches and materials. The area most associated with embroidery is north-west India, where it was produced by men in professional workshops and by women at home. In the 17th century, the finest Gujarati ari (hook) embroidery was highly prized by both the Mughal court and European consumers. Other outstanding local styles include the kantha embroidery of Bengal, phulkari from the Punjab, and chikan whitework embroidery from Lucknow.

The embroiderers at the Sankalan embroidery design and production house in Jaipur, Rajasthan, practise a variety of stitch techniques to embellish fabrics by hand. The V&A followed their work on a lehnga, a wedding skirt, from traced outline to finished product. Only by slowing the footage could the incredibly fast stitching of ari embroidery be captured, as professionals perform it so rapidly it is nearly impossible to see with the naked eye.