The Fabric of India: Sacred & Splendid 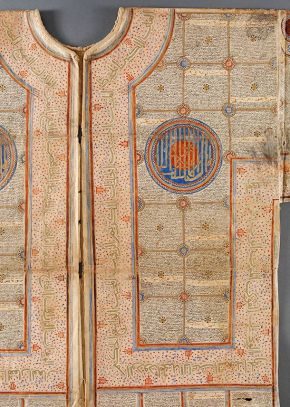 India has been home to a great variety of religions over the centuries. Hindus, Muslims, Jains, Buddhists and Christians in particular make widespread use of textiles in their worship. Whether worn for rituals, offered by devotees to temples and shrines, or used as hangings to decorate sacred spaces, textiles still play a key role in religious observance in India. Religious stories such as the Ramayana and scenes from the life of Krishna or Jesus can be told on cloth. The Buddhist lotus is woven into textiles to adorn temples. The words of the Qur’an are written on an undershirt to protect its wearer. 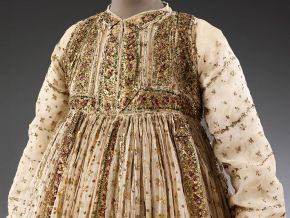 Textiles produced for India’s royal courts demonstrated the wealth of rulers and the skills of craftsmen. Surviving pieces from the 15th century onwards show that courtly patronage produced some of the finest textiles ever made – in India and in the world. In the royal workshops of Gujarat, weavers made elaborate silks with human, animal and flower designs. In the Deccan, meticulously hand-drawn and dyed cottons were made for courtly clothing and furnishings. The imperial workshops of the later Mughal emperors produced lavish floral and figural wall hangings, often based on European and Iranian designs. In south India, Hindu rulers drew on local painting traditions as well as the aesthetics of Mughal flower patterns to create their courtly masterpieces.