Yohji Yamamoto: About the exhibition 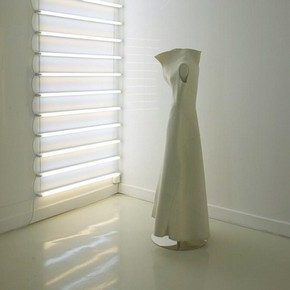 Yohji Yamamoto became internationally renowned as a fashion designer in the early eighties for challenging traditional notions of fashion by designing garments that seemed oversized, unfinished, played with ideas of gender or fabrics not normally used in fashionable attire such as felt or neoprene. Other works revealed Yamamoto's unusual pattern cutting, knowledge of fashion history and sense of humour. His work is characterised by a frequent and skilful use of black, a colour which he describes as 'modest and arrogant at the same time'.

Central to Yohji Yamamoto’s work are the textiles. ‘Fabric’ he said once ‘is everything’. Each one of the fabrics used in his collections are made to his specifications by different craftspeople in and around Kyoto in Japan.

Over the years Yamamoto has also worked with a number of collaborators in different fields. In particular his work with now famous fashion photographers such as Nick Knight, Paolo Roversi and Craig McDean has resulted in now often iconic fashion imagery. 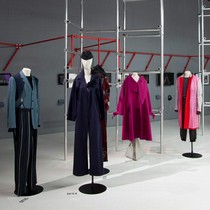 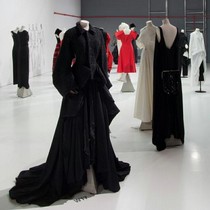 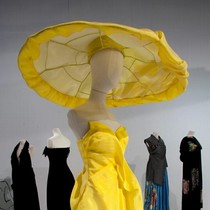 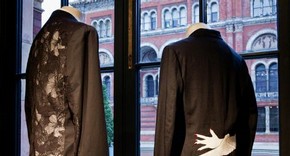 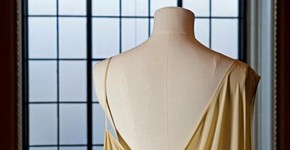 'This is my idea for a woman's body. I like the curve of a woman's back. I always watch her silhouette in the streets'.

One of Yamamoto's most inspiring encounters was with German choreographer Pina Bausch. To Yamamoto, Bausch represented the perfect silhouette. Also, both their work allowed space for the viewer and wearer's interpretation. Yamamoto designed a number of collections in homage to Bausch, including this silhouette. 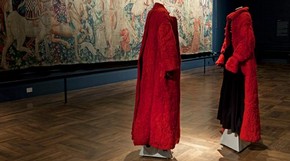 'Fabric is everything. Often I tell my pattern makers, "Just listen to the material. What is it going to say? Just wait. The material will probably teach you something"'.

These three silhouettes, with coats in red carded wool and structured dresses reminiscent of late 19th-century fashions, mirror the frequent appearance of red in the 15th-century Devonshire Hunting Tapestries. 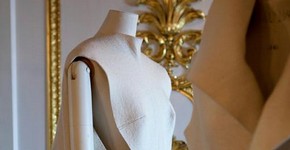 'I'm searching for a new proportion. What interests me is the 'space' between the person wearing the clothes and the clothes themselves - the airiness, the movement, the silhouette'.

The space between the garment and the body is of great importance to Yamamoto. It allows the wearer to inhabit the garment naturally, without being constricted by its shape. The structure of these two sculptural white felt pieces, determined partly by the material itself, offers such a space. 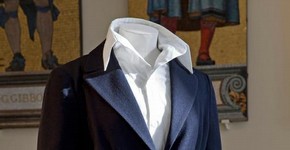 'For me, a woman who is absorbed in her work, who does not care about gaining one's favour, strong yet subtle at the same time, is essentially more seductive. The more she hides and abandons her femininity, the more it emerges from the very heart of her existence'.

Yamamoto designs outside gender stereotypes, at times in direct opposition to them. He is particularly known for his white shirts and dark suits, all carefully tailored yet androgynous in shape. 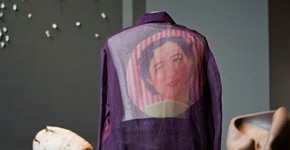 'I wanted people to wear my clothes for at least ten years, so I asked the fabric maker to make a very strong, tough finish. It's very close to designing army clothing'.

A key inspiration for Yohji Yamamoto is military and utility wear because it is designed for a very distinct function and made to last. These three menswear silhouettes also reveal the humour in his menswear creations through the placement of prints and words.

As part of this exhibition, two further satellite installations are on display across London. 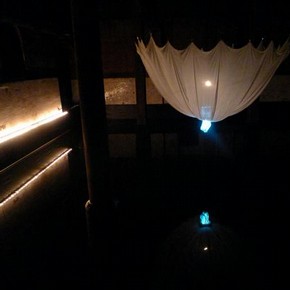 Making up the third element of the series of exhibitions devoted to the work of the iconic Japanese designer Yohji Yamamoto in 2011, The Wapping Project will install just one major piece in the cavernous Boiler House of the Wapping Hydraulic Power Station; the celebrated, oversized white silk wedding dress with bamboo crinoline (A/W 1998). The installation seeks to capture by way of metaphor, something of the wit, simplicity and imagination of this extraordinarily influential designer. 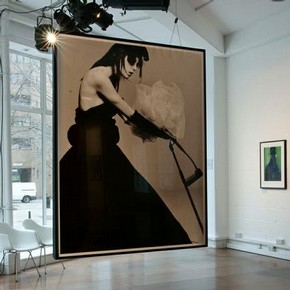 Coinciding with the Yohji Yamamoto retrospective at the Victoria and Albert Museum, The Wapping Project Bankside will show the photographs of seven international photographers who have worked on Yamamoto's legendary catalogues produced between the early 1980s and 2005. Titled Yohji's Women, the exhibition expresses Yamamoto's love of strong women, who do not fit the conventional, magazine archetypes.