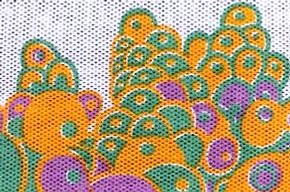 'Zika Ascher is an innovator, the man who introduced the mohair cult, and the flowered prints launched by Christian Dior.'
Vogue, January 1962.

Zika Ascher came to England from Prague in 1939 and established a small textile business in London with his wife Lida. During the 1940s the Aschers commissioned leading artists such as Matisse and Henry Moore to design a collection of headscarves to brighten up the dull postwar British wardrobe.

From 1946 Ascher supplied fabrics to the international fashion industry. They opened their own printworks and became known for lively screen printed designs. Ascher textiles, especially the artist designed ones, now feature regularly in exhibitions and at auction. 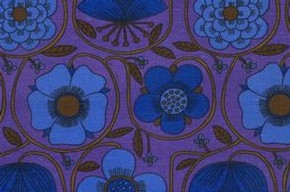 In 1964 Conran opened the first Habitat in Brompton Cross, London. It was staffed by assistants clad in Mary Quant clothing, as a way of attracting young customers.

Conran sold contemporary home furnishings and domestic items. He sourced textiles and furnishings from a number of companies. Many of these goods were not available elsewhere in Britain.

Prices were low to enable customers to replace these household items every few years as fashions changed. The products were displayed en masse and within easy reach. By the end of the decade, Habitat had nine UK branches and today the shop retains its reputation for inexpensive, appealing design. 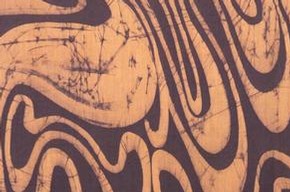 The 1960s was an era of revival for many handicrafts, including textile making. Examples of batik, hand-dyed fabrics and weaving all show practitioners bringing new ideas to these crafts. This fitted in with the late 1960s philosophy that making a limited number of items by hand was preferable to commercial overproduction.

Batik is a technique for dyeing fabric that originated in Indonesia, an area colonised by the Dutch. Batik was first popularised in Europe at the turn of the nineteenth century. The 1960s saw a renewal of interest in ethnic techniques.

Many leading 1960s craft practitioners had been trained by an earlier generation and craft methods were sometimes modified for commercial use. Susan Bosence was a teacher and producer of block printed and resist-dyed textiles. She learnt these techniques from Barron and Larcher. These two women owned a well known studio which produced hand printed textiles from the 1920s to the 1940s.

Hull Traders is one example of a commercial company which hand dyed textiles. Alastair Morton of Edinburgh Weavers learnt hand weaving from Ethel Mairet and adapted some of her techniques for commercial use by his firm. 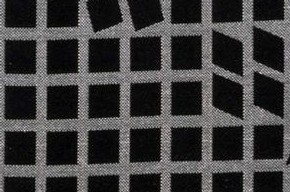 In the 1920s, the textile firm Morton Sundour decided to establish an experimental unit called Edinburgh Weavers. Alistair Morton was head of Edinburgh Weavers from the thirties until his death in 1963. Morton commissioned leading artists to create patterns and built up a reputation for cutting-edge design. Many painters and graphic artists, such as Victor Vasarely, continued to design textiles for the firm during the 1960s.

The colours of these textiles are more muted than the ones sold by Heals and Hull Traders. This is partly because the designs on this page mostly date from the early 1960s. Also, Edinburgh Weavers made textiles for a more traditional market and were often commissioned by architects to design fabrics for specific interiors. 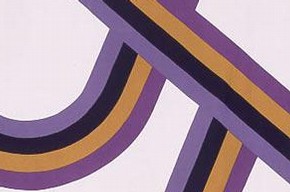 The department store Heal's dates back to 1810 and has a distinguished history. Ambrose Heal, company director during the early 20th century, designed both Arts and Crafts and modernist furniture. Tom Worthington was Heal's Design Consultant during the sixties. He was among the first to invest in contemporary textiles.

Worthington had an open-minded approach to buying fabric designs. He chose new schemes from freelance designers and recent art school graduates. Heal's then worked together with the designers to come up with a range of colourways in which to print the fabrics.

An article in The Guardian (December 1970) reports that: 'Tom Worthington ...aimed to meet both contract and domestic requirements and include designs which he knew would not be commercially successful, but believed would set trends for the future.'

The range of fabrics on this page shows that Heal's was a leader in this field. The designs they bought exemplified the changing moods of the decade. They develop from sober colours and geometric shapes, through Pop and Op Art-inspired motifs. In the later sixties they are influenced by flower power and revival patterns then move towards the super-realism associated with the early seventies. 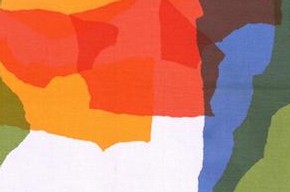 'The combination of Hull Traders and Shirley Craven has produced a steady flow of excellent modern furnishing fabric designs over the past few years, many of them trendsetters.'
Design, May 1968.

Certainly since they began in 1958, Hull Traders had acquired a reputation for their fabric designs by winning several awards. Shirley Craven, who designed textiles for the company, also selected designs by freelance textile artists and oversaw the process of printing these onto fabric. Designers who carried out work for for the company included Eduardo Paolozzi, Althea McNish and Humphrey Spender.

Hull Traders was initially based in London before moving to a converted mill in Trawden, Lancashire. All the designs were screen printed by hand using pigment dyes. The aim was to produce short runs of avant-garde textiles, sold in Hull Traders' showroom off Oxford Street in London. 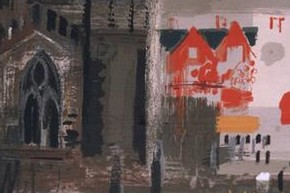 In 1960 Sanderson issued its Centenary Collection, to celebrate one hundred years of producing wallpaper and textiles. It was therefore had a well-established reputation by the time it brought out its 1960s range, including John Piper's 'Northern Cathedral', shown right.

Besides commissioning artists like Piper and Spender, Sanderson also bought a number of its patterns from Italy and the US. Later in the decade Sanderson brought out some stimulating Pop patterns in keeping with the zeitgeist. 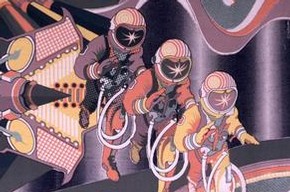 Established in the 1870s in Spitalfields as a silk weaving company, Warner & Sons was one of the best known 20th century British producers of high quality domestic woven and printed furnishings.

During the 1960s Eddie Squires was the company's Chief Designer of fabrics and later became an Associate Director. A contemporary of Ossie Clark and David Hockney, Squires studied at the Central School of Art in London. He worked as a freelance textile and interior designer before joining Warner & Sons in 1963.

Squires was interested in all aspects of modern art and design, from pop art to space travel. The V&A owns a series of his scrapbooks in which he collected material that inspired him visually, including packaging, postcards and photographs. His research allowed him to create furnishing fabrics which capture the spirit of the decade. Sue Thatcher was a colleague whose designs were also influenced.