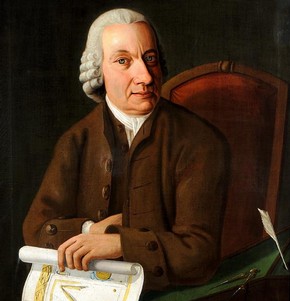 Abraham Roentgen learned cabinet-making from his father, then worked in the Netherlands and for various London masters. He was regarded as an expert in metal inlay.

Around 1738, ‘struck as if by lightning’, Roentgen joined the Moravian Church (a Protestant sect) and returned to Germany. He married, then undertook an abortive missionary voyage. In 1750 he moved with the Moravians to Neuwied and established a furniture workshop, selling at the Frankfurt fairs.

After 1760, Roentgen’s furniture became more mechanically complex and luxuriously decorated. Despite his reputation and patronage, the business became financially overstretched and Abraham passed the management to his son David 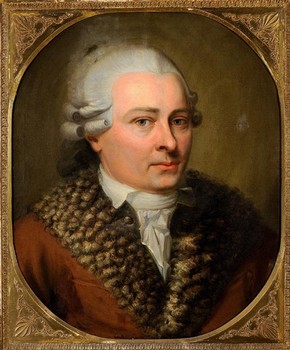 David worked with his father Abraham as apprentice, then partner. He promoted the business successfully, but sometimes contrary to Moravian religious ideals of simplicity. With David managing the enlarged workshop, the constructional and mechanical ingenuity of the furniture became even more refined. It incorporated brilliant marquetry and, from about 1780, superb gilded-metal mounts.

David travelled widely, cultivating influential clients at various European courts. He established a branch in Paris and in a single year in St Petersburg sold 136 pieces to Catherine II. The French Revolution ruined this international trade. By 1801 he had wound up the business and was working for the Moravian Church.

As the master of a small workshop, Abraham designed and made furniture. He adapted English and Dutch designs for the German market, adding decorative options in luxury materials or motifs from imported prints. His greatest commissions, like the Walderdorff desk, combined lavish decoration in marquetry with ingenious mechanical devices.

Other Moravians criticised his opulent furniture but business continued. Abraham introduced innovative workshop practices. In particular, he developed standard elements with different surface decoration for use in many different types of furniture. His furniture could be dismantled for easier shipping: a practice that David Roentgen exploited for the transport of furniture hundreds of miles across Europe.

David Roentgen’s international fame rested on energetic marketing. His first success came in 1769 when he organised a promotional lottery of unsold stock. Later, in Paris, he built on favour at court to open a shop. In Russia, the Empress Catherine II so admired his furniture that she paid over the asking price.

The ambitious and hugely expensive furniture relied on the skills of his mechanic, Johann Christian Krause, and his business partner and clock-maker Peter Kinzing.

Although Roentgen had a large workshop of about 40 craftsmen and a complex network of suppliers, he managed to avoid the cash-flow problems that ruined many 18th-century cabinet-makers.

My name is Yannick Chastang and I’m a furniture conservator and a cabinet-maker.

I think in the point of view of marquetry making, or inlay if we want to be proper and call it inlay, what David Roentgen did has never been reproduced since. It’s something that we all looked at when we are learning the trade of marquetry. And even one of the small exercises, we all did a small bird or a small animal from Roentgen and we’d never achieve this quality. So it’s unique in that respect.

The way they get this effect, it’s very much like what we would call painting by number, so every little element is a different colour of wood. So the way it’s done is by laying a plain background. So for example, on this oval table, you’ve got a kind of effect of a sky, which is this, nowadays, very plain yellowish wood. So this wood would have been laid as a plain piece of veneer, and using a knife, or using a little chisel, every single little piece of wood would be inlaid into position. So you would dig a cavity, you would locate your piece of wood inside, you would glue it in this cavity and eventually you would smooth the surface, you would scrape and sand the surface flat and smooth.

What you see today, it’s a very pale reflection of what it would have been. It’s very difficult for us to imagine what the colour would have been in the 18th century. But all of this very brightly coloured green that you see now would maybe have started as a kind of blue. But what we’re really missing here is all of the red and the yellow.

David Roentgen is remembered as having sold the most expensive piece of furniture ever made in the 18th century for the court of King Louis XVI of France, which was sold by David Roentgen for the amount of more than 96,000 French pounds. So 96,000 French pounds in the 18th century would have represented about 150 years of average salary. That’s obviously a huge amount of money. The sad story of this cabinet is that it was eventually destroyed during the French Revolution, dismantled and unfortunately is not with us any more, it’s in various little pieces. So, even 96,000 pound pieces of furniture do end up on the skip!

Sarah Medlam, Deputy Keeper of Furniture, Textiles and Fashion at the V&A, discusses the relationship between Abraham and David Roentgen and the Moravian Church

My name is Sarah Medlam and I’m the Deputy Keeper of Furniture, Textiles and Fashion at the Victoria and Albert.

The story really starts when Abraham Roentgen, as a young man, travelled to Holland and then onto England to practise his trade. He had a great moment of enlightenment in London when he became a member of the Moravian Church, and this really influenced his life. And he went back to Germany for spiritual formation, and, at one time, was intending to go to the North American colonies, to Carolina, to be a missionary. But it’s a rather exciting story in that the ship was attacked by Spanish pirates and he was shipwrecked in Galway and spent time in Ireland. And obviously I think after the shock of all that, decided that he would remain as a cabinet-maker in Germany.

And he set up his workshops eventually in Neuwied. And the relationship between Abraham and the Moravian Church was always quite difficult, because in fact the Moravians rather liked simplicity and he was thought, in producing luxurious furniture, to be sort of transgressing the rules of the sect. But when David Roentgen took over his father’s workshop, he had no intention of being bound by the Moravian traditions, and, I think, was again in constant battle with them about his production of such luxury furniture and certainly with consorting with high society in Paris and with the Empress of Russia. But he did return to the faith at the end of his life, so I think there was always a constant pull there from their religious beliefs against their ambitions and their skill in making furniture.

This display contains two tables. The one on the left is large and made of a red-brown cherry wood. On the right is a smaller, dainty table with an oval top. Both were made in Germany in the 18th century – the larger by Abraham Roentgen and the other by his son David.

The larger table has a mechanism that allows it to be configured as a side-table, a card-table or a writing desk. It’s exhibited sideways-on – facing to the right – and as if part-way through being opened up. When shut, the table is a metre wide and half a metre front to back. It looks much like any other side-table, except the top – with curving sides and front edge – is deeper than most. That’s because the fixed table top is covered by two flaps – each identical to it in size and shape – lying one on top of the other. These flaps hinge along the table’s back edge, and one, or both, can pivot up and over, through 180 degrees to double the table in size making it into a square card or writing table. Here they’re displayed in a nearly vertical position as if they’ve been stopped halfway through the opening action. Occupying most of the fixed tabletop is a box – a storage unit – that has popped up from where it’s usually concealed.

The table has four S-shaped cabriole legs carved with a mask-like face at each foot and a swirling leaf design growing up and around the lower edge of the table. The back leg at this nearest side has been partly swung out to the left. It’s sprung – released by a button – and when it’s moved all the way to the back the flaps can be pivoted over to rest on it. To configure the table for cards only the first flap is used. Its underside is green baize – as is the top of the second flap – so when it is folded out, the result is a big square card-table. The baize is edged with veneer, expanding in each corner to a circular disc for a candlestick, and a shallow oval dish, shiny with use, for game counters. The table becomes a desk with a green leather writing surface when the second flap is swung over to rest on the first. When another catch is pressed the box unit comes up out of the fixed table top, providing drawers, cubbyholes and a central book-rest. The table is crafted so precisely that a series of holes has been made in the base of the unit to allow air to escape when the box is pushed back down.

The other table – its oval top resting on narrow square legs tapering to casters – has a pale, glowing wood veneer and gilded brass details, giving it a classical feel. This table is striking for the marquetry on its curved front and sides and covering the top – designs made from slivers of wood so tiny and intricate it’s hard to believe they’re not sketched and painted. The original bright colours have faded to muted shades of green and brown. The frieze is formed by the front and two side panels that each depict a heap of spears and swords. And on the table top is an astonishingly detailed scene from Virgil’s Aeneid that shows Aeneas escaping from burning Troy with his father and son. David Roentgen’s technique here was brand new. Rather than assembling an image like a jigsaw-puzzle, he cut shapes into a single sheet of veneer and then inlaid the corresponding pieces of contrasting woods into the recesses.

This table is also mechanical. The three panels of the frieze are in fact drawers. The front drawer is released by a button to reveal a leather writing surface. Pulling it all the way forward releases the two side drawers – in an unexpected way. Each pivots on a hinge at its far side, swinging back like outstretched wings.