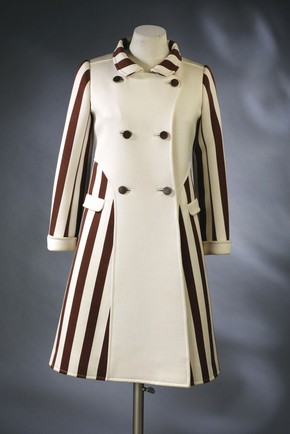 'Where do his tennis dresses, his sailor dresses come from? Where did he find them? On the steps of Delphi. In the wardrobe of Electra. They are modern and they are antique.'
Violette Leduc 'Is Courrèges Wearable?' Vogue, 1965.

André Courrèges (born 1923) graduated in engineering before studying fashion and textile design. He worked for Balenciaga for ten years, which allowed him to develop great skill in cutting garments. In 1961 he established his own fashion house and began to develop a different look.

His Spring collection of 1964 showed radically different clothes. These designs included angular mini dresses and trouser suits. The look was created by using heavyweight fabrics like gabardine. Many of the outfits had cut-out midriffs and backs and were worn without a bra. These were matched with flat boots, goggles and helmets taken from the equipment worn by astronauts. The stark shapes and white and silver colour scheme immediately earned the name Space Age.

Courrèges' fashion shows were organised by his wife. These were lively presentations featuring athletic, partially nude models. Courrèges became interested in shorter skirts at the same time as Mary Quant was designing them and there has been some controversy over who 'invented' the miniskirt. He also promoted trousers for women. At the time, these were worn only on
informal occasions, but Courrèges introduced slim, tapering trousers for everyday and smart wear.

Courrèges wanted to produce affordable clothes. From 1965 he spent two years raising funds to make his clothing more accessible. However, his next collection was criticised for reproducing the same styles. Like the majority of big name couturiers, Courrèges now sells accessories, luggage and perfume in addition to his clothing ranges.