Anxiety and Hope in the Aftermath of World War II 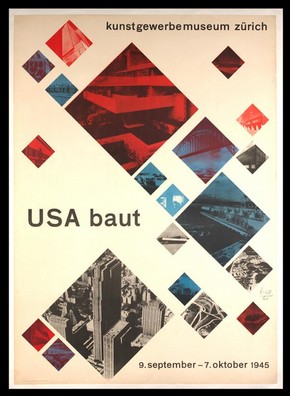 The Second World War caused tremendous devastation. But this tragedy also created an opportunity for architects and designers, as well as for politicians and ideologues. Here was a chance to build a better world. But what form should that world take?

The dominance of two antagonistic superpowers, the USSR and the USA, after 1945 brought a strongly ideological aspect to reconstruction debates. Should post-war societies be organised as free-market democracies, or should they, as the Soviet Union claimed, be organised by strong governments for the benefit of ordinary people?

The bomb in the brain

A new sense of anxiety in the world was initiated by the USA's atomic bombing of Japan in 1945. Four years later, the Soviet Union performed its first successful nuclear tests.

With growing tension between the former war-time allies, a conflict fought with nuclear weapons was now possible. Artists and designers were fascinated and disturbed by the advent of the atomic age.

In 1947, American Secretary of State George C. Marshall announced a programme of economic aid for Europe. One of the Marshall Plan aims was to reduce the appeal of communism to those impoverished by war.

The Plan was supported by an extensive programme of exhibitions and films promoting the benefits of industry and the free market. Exhibitions of modern products, many derived from new technologies developed during the war, demonstrated the comfortable modern lifestyles that could be achieved by citizens of democratic states.

The Cold War was fuelled by huge investment into science and industry on both sides of the East - West divide. Developed for military use, many technologies found their way into everyday life in novel forms of design and architecture. New, lightweight structures which could be prefabricated and quickly assembled on site were designed for military installations but were also given peaceful uses.

Berlin was the epicentre of Cold War conflict. East and West competed to demonstrate their superior claims to meet the needs of society. To this end, monuments, landmark buildings and, above all, new social housing schemes were created.

The grand 'workers' palaces' on Stalinallee in the East and the modernism of Interbau (Internationale Bauausstellung) in the West - an exhibition of buildings designed by a glittering cast including Le Corbusier, Walter Gropius and Oscar Niemeyer - were showcases for the two competing systems.

This content was originally written in association with the exhibition 'Cold War Modern: Design 1945-70', on display at the V&A South Kensington from 25 September 2008–11 January 2009