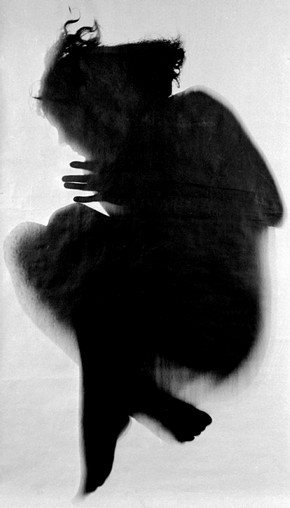 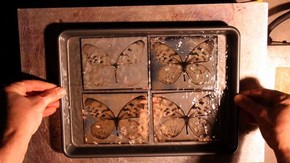 The essence of photography lies in its seemingly magical ability to fix shadows on light-sensitive surfaces. Normally, this requires a camera, but not always. Several artists work without a camera, creating images on photographic paper by casting shadows and manipulating light, or by chemically treating the surface of the paper.

Images made with a camera imply a documentary role. In contrast, camera-less photographs show what has never really existed. They are also always ‘an original’ because they are not made from a negative. Encountered as fragments, traces, signs, memories or dreams, they leave room for the imagination, transforming the world of objects into a world of visions.

Camera-less photographs can be made using a variety of techniques, the most common of which are the photogram, the luminogram and the chemigram. These techniques are sometimes used in combination. Many involve an element of chance.

Chemigrams are made by directly manipulating the surface of photographic paper, often with varnishes or oils and photographic chemicals. They are produced in full light and rely on the maker's skill in harnessing chance for creative effect. Documented experiments are often an important part of the process.

A print made from digital images using digital printers. Inside such printers, chromogenic (or 'C'-type) photographic paper is exposed to red, green and blue lasers. The paper is then processed in the traditional, chemical-based manner. Images created by camera-less methods can be digitised and turned into C-prints. When processed in this way, camera-less images can be retouched, enlarged and reproduced as multiples.

A print made using direct positive colour paper. This paper was originally introduced in 1963 for printing colour transparencies or negatives. It is coated with at least three layers of emulsion, each of which is sensitised to one of the three primary colours. Each layer also contains a dye related to that colour. During development of the image, any unexposed dyes are bleached out (hence 'dye destruction'). The remaining dyes form a full-colour image.

A print made using paper that has been coated with gelatin containing silver salts. Where light strikes the silver salts, they become dark. The image is then developed out using chemical developer. The paper itself can have a matt or gloss surface, and the image can be toned. Introduced in 1871, the gelatin-silver print is still in general use today.

A variation of the photogram (see below). In a luminogram, light falling directly on the paper forms the image. Objects placed between the light and the paper (but not touching the paper) will filter or block the light, depending on whether they are transparent or opaque.

Photograms are made by placing an object in contact with a photosensitive surface in the dark,  and exposing both to light. Where the object blocks the light, either partially or fully, its shadow is recorded on the paper.

The term 'photogram' seems to have appeared around 1925. The photogram artist is not able to predict the results in the viewfinder of a camera, and often works in the dark. The final image is only apparent after physical and chemical manipulation or development.

This text was originally written to accompany the exhibition Shadow Catchers: Camera-less Photography, on display at the V&A South Kensington between 13 October 2010 and 20 February 2011.