Charles Dickens at the V&A 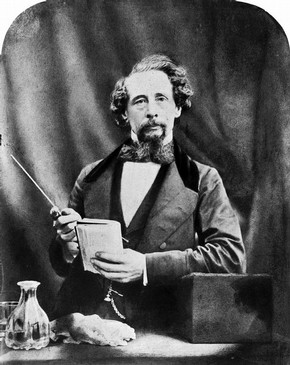 Books, manuscripts, correspondence, illustrations, pictures and other objects relating to Charles Dickens’s life and works can be found in many parts of the V&A.

The single largest group of group of material came to the Museum as part of the Forster Collection, bequeathed by the author’s friend and biographer, John Forster (1812-1876). The Forster Collection includes the manuscripts of most of Dickens’s major novels, as well as autograph letters, printers’ proofs and first editions. The Museum also holds many portraits of the author, plus numerous prints, drawings and paintings that feature characters from his works.

By the time of his death in 1870, Charles Dickens had acquired the kind of celebrity that film stars might have today. As a result of this fame, images of the writer were mass produced, particularly as photographs and prints. An image of Dickens sitting in an arm-chair shows him in a creative mode, with figures from his writings swarming around his head as they emerge from his dreams.

The author was also involved in theatrical activities from time to time, appearing as Bobadill in Every Man in his Humour and Sir Charles Coldstream in Used Up, among others. A poster lists his appearance in a comedy performed at the Free Trade Hall, Manchester in 1852, along with John Forster and other friends.

There are also photographs taken on his readings tours – these carefully staged events, developed in the late 1850s, attracted huge audiences. Signed copies of his portraits were often given to admirers by the writer while his signature and a series of iconic portraits were reproduced in repeated editions of his works. Examples of his writing equipment and even his clothes were collected as relics. Published prints of Gads Hill Place, near Higham in Kent, also demonstrate the level of interest in the house where Dickens lived from 1856. Some photographs portray Dickens as the contented family man, though he formed a relationship with the actress Ellen Ternan and separated from his wife Catherine in 1858. 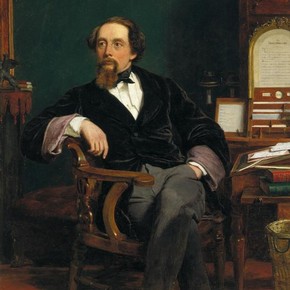 Dickens numbered many artists among his friends. William Frith (1819-1909) was commissioned in 1854 by John Forster (1812-1876) to make a portrait of the writer, and this was finally completed in 1859. Dickens is shown seated in his study at his house in Bloomsbury, with the first chapter of A Tale of Two Cities (1859) on the desk in front of him. The image became iconic and was reproduced in many forms.

An informal drawing of 1843 by Daniel Maclise (1806-1870) shows the author with his wife Catherine and sister-in-law Georgina, just as he was achieving celebrity status; another informal sketch shows Dickens reading The Chimes to his friends before publication in 1845. George Cruikshank, already celebrated as an illustrator when he met Dickens in the mid-1830s, was a regular visitor to the author’s home and made a number of sketches of the writer.

When Dickens died in 1870, his remains were buried at Westminster Abbey. Forster commissioned a watercolour by Sir Luke Fildes, showing the writer’s grave slab opposite a memorial to William Shakespeare.