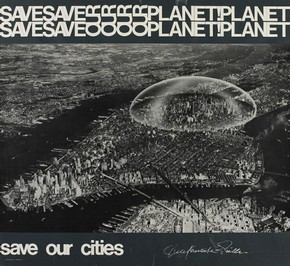 The late 1960s saw the last surge of utopian thinking in the 20th century. Visionaries on both sides of the Cold War envisaged new ways of living.

Radical design groups in the West, with names and images like rock bands, used architecture to challenge social conformity. In the Eastern Bloc, a new generation brought a cosmic sensibility to design.

Many of the most startling schemes reworked Cold War technologies. Inflatable buildings, geodesic domes and electronic media, once conscripted for military use, were now re-imagined as tools for nomadic life or instruments to liberate mind and body.

However idealistic, these schemes were often marked by a dark undertone of irony. At a time of accelerating concern with the effects of militarism and consumerism on the earth, uncritical celebration of technology was increasingly hard to sustain.

The US military deployed inflatable buildings as protective covering for radar installations in the 1950s. In the 1960s, young architects and designers were inspired by these pneumatic structures. Light and portable, they were adopted as a critique of the inertia and monumentality of conventional architecture and furnishings.

In 1960, NASA scientists predicted the rise of the 'cyborg', a man-machine hybrid. In the late 1960s, artists and designers adapted this idea by augmenting the body with sensory devices and communication tools. Unlike the life-supporting spacesuits worn by astronauts in deep space, these designs were to be tools for expanding the consciousness and the sensory capacities of the wearer.

Cold War competition had seen design and architecture deployed to demonstrate the superiority of either Soviet-style socialism or Western capitalism. In the late 1960s, architects and designers came to reflect on the impact of this contest on the planet. Utopian schemes of the age were often underscored by critical attitudes. How, they asked, can we exploit new technology for the benefit of humanity without producing inhuman effects? How might it be possible to live modern lives without spoiling our planet?

The Cold War changed the way in which the world was seen. Life on earth came to seem all the more precious when it could be viewed from the vacuum of space. As an editorial in the New York Times in 1970 put it:

'Unless this flowering home planet remains a haven of life, the entire solar system may become as devoid of life as are the mountains of the moon.'

This Cold War future still haunts us: the threat of nuclear warfare may seem somewhat more distant today, but the legacies of aggressive industrialisation in the 1950s and 1960s are all too evident in our global environment. Many of the key questions of Cold War modernity - such as how to design new technology for the benefit of humanity without producing inhuman effects, or how to imagine modern lives outside conditions set by the marketplace - remain just as present today.