The façade of Sir Paul Pindar's house is one of the largest objects in the Museum, and an extremely rare survival of a London timber-framed house built before the Great Fire of London (1666).

The façade stood for nearly 100 years near the front of the Museum, in what was, until recently, the Museum shop. In 2006 Museum staff began to move it to Room 64b in the new Medieval and Renaissance Galleries, where it was finally installed in 2009. This move provided an opportunity to study the structure in detail for the first time in living memory.

Full scaffolding was built around the façade, so that structural engineers could analyse how the parts hold together and advise on what support will be needed in its new location.

Over a period of months, curators compared the façade with earlier descriptions and illustrations made while it stood in Bishopsgate. An archaeologist specialising in the study of standing buildings made a detailed survey of the existing structure. The survey records every separate timber and panel, and notes each peg and metal fitting, the replacement parts and even traces of paint that survive. 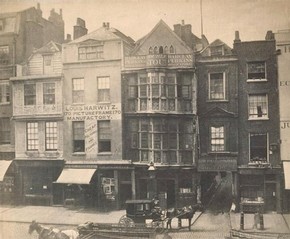 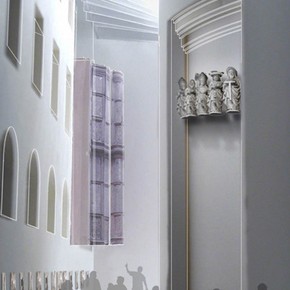 Visualisation of the façade of Sir Paul Pindar's House in Room 64b. Image courtesy of MUMA Ltd 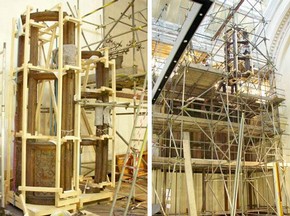 The façade of Pindar's house during dismantling, spring 2007

When the façade was first built, the carpenters used individual timbers precisely jointed and fixed on site. When it left Bishopsgate in 1890 it was dismantled in a similar way. Remarkably however, some sections, notably the large, projecting carved window frames, were not dismantled but moved intact, so the original joints survive.

Once the survey was complete, the façade was taken apart by a specialist contractor, Momart, over a period of six weeks. Each piece was cleaned, numbered and recorded, so the façade can be reconstructed in its new location without too much difficulty. Any damage or fragile timber that will require consolidation or repair was noted.

The interior of the façade preserved more of Sir Paul Pindar's house than we had expected, with oak panelling and carving at first-floor level, and lath and plasterwork.The evidence of exposed joints suggests how the surviving structure fitted into the larger building. Pindar's house was very much larger than the façade in the Museum, but its form is not clearly recorded.

The opportunity to dismantle the façade also allowed the woodwork to be examined more easily than in a standing structure. A series of carpenters' marks indicated how the parts were to be assembled in 1600, and again when it was brought to the Museum in 1890.

Close examination of the timber surfaces revealed how they were prepared: riven (split), or cut by axe or saw, and how they shrunk and weathered over 400 years on a London street. This examination was also an opportunity to study the origin of the wood. Most of the structural timbers were probably cut from oaks that grew in south-east England, while the flat boards used for the internal panelling were probably made from imported Baltic oak.

Some pieces of wood were identified as being suitable for dendrochronological dating in the future. These were kept separate from the 219 other pieces that were wrapped and stored away from the Museum. After the façade was dismantled in 1890 the glass and leading of the windows were replaced. Decayed woodwork on the right-hand side was also replaced with new timber, but the decoration that was originally carved in wood was copied in plaster.

The great size and weight of the façade means that reconstruction will be a major operation. Every element and joint has to hold if the whole is to be stable. Some supports will be added to relieve strain on the fragile parts, but amazingly, much of the original timber is still adequate for the job it was meant to do in 1600.

Detail of the framing for the large, exterior panels