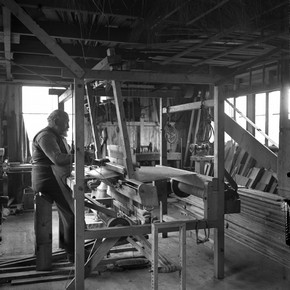 David Kirkness in his Kirkwall workshop, about 1910. Orkney Library & Archive

David Kirkness, like his father and grandfather, trained as a joiner in Orkney. In the 1870s he moved with his wife and growing family to Kirkwall, the principle town of these remote Scottish islands. There, he set up a general joinery workshop, making traditional straw-backed Orkney chairs as a sideline.

Twenty years later the Orkney chair had become the workshop’s main product. Over his lifetime Kirkness made a reported 14,000 chairs. The demand came from a fashionable clientele far removed from local Orkney families.

After the Second World War Reynold Eunson, a fellow Orcadian carpenter, bought the workshop and continued manufacturing the Orkney chair in the traditional manner.

In May 1890 Kirkness was invited to submit two Orkney straw chairs to be part of the Scottish Home Industries Association display at the fifth Scottish International Exhibition in Edinburgh. 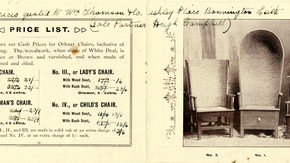 The chairs generated widespread interest as their hand-craftsmanship and vernacular design had a natural affinity with the Arts and Crafts movement. The traditional ‘straw chair’ became the fashionable ‘Orkney Chair’, gracing drawing rooms designed by Charles Rennie Mackintosh among others. A pair was even sent to King Edward VII.

By 1909, retailers such as Liberty of London were ordering over 40 chairs a month. Four other Orkney workshops began making the chair, but none matched the success of David Kirkness. 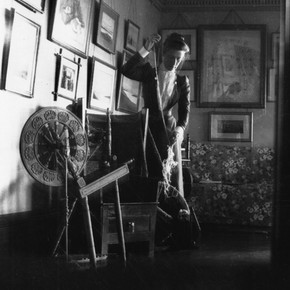 Lady Eliza D'Oyley Burroughs standing beside an Orkney chair at her home on the island of Rousay, Orkney, about 1900. Orkney Library & Archive

Kirkness should not be identified as an Arts and Crafts maker. He was not reviving a ‘lost’ tradition. Instead, the Orkney chair is a ‘vernacular’ object, its design, and even some of the tools used in manufacture, passed down from generation to generation of Orcadians.

Kirkness’s innovation was to standardise the basic chair into four models: a gentleman’s, lady’s and child’s version of the standard chair, as well as a hooded version with box base. In doing so, he reflected contemporary Victorian social conventions but also simplified the making and marketing of his products.

The aristocratic women who ran the Scottish Home Industries Association proved invaluable in marketing the Orkney chair. Driven by a desire to promote Scottish goods made in rural homes, they promoted it at British and foreign exhibitions. This led to increased sales to individuals and shops, including exports to South Africa, the Americas, India and Australia.

The Orkney chair fitted into a romantic view of Scottishness at the turn of the century, and the idea that a well-crafted object could embody local or national identity.

My name is Glenn Adamson and I'm the Head of Research at the Victoria and Albert Museum.

So we're looking here at Orkney chairs, so they're a traditional form that's made in Orkney, which is a set of islands north of Scotland. And they're made in a combination of materials - often salvaged wood in the earlier examples, maybe from packing crates or other materials - and then oat straw that's tied with sea grass, which is called bent grass. And so you have a combination of woodworking techniques with basket making techniques to fashion the chairs.

The Orkney chair really snaps into focus, you could say, in the late 19th century, at the very moment that it's commercialised, especially by David Kirkness, one of the prominent makers of that period and the person who made more examples than any other, supposedly 14,000 over his career. And he was actively promoted, and his chairs were exported and shown in exhibitions here in London and elsewhere. And it was only by leaving Orkney that the chair in fact became known as an Orkney chair. So it's a very interesting kind of backwards example, where a vernacular tradition becomes valued exactly at the moment that it starts to leave and that people outside start to notice it. So, for example, the fact that the chairs are sold are Liberty’s is very interesting, because Liberty’s is one of the most stylish shops in London.

One thing I think is really interesting about the Orkney chair in particular is that its form speaks to this idea of the hearth and the stone floor and the cottage and this rather remote location. So you have the hood that protects you from drafts or, you know, some people say that the hood is also to protect you from noise - all the children running around the house. And so it gives you this sense of a very kind of folksy, humble way of life. But of course, that sense of impoverishment is kind of an authenticity in its own right, and that's exactly why people from outside Orkney choose this chair as a representation of this folk tradition. It's the very lack of means intrinsic to the tradition that they come to value.

My name is Fraser Anderson and I'm a furniture artisan specialising in the production of Orkney chairs.

Well, in Orkney, being north of Scotland, it's very exposed. There's only one parish in Orkney you can't see the sea from. So, there's no trees, so you can imagine it's very windy. So they would have a straw back chair and then this was to keep the warmth in and the cold drafts out. The straw backs are a local material. It's white oat straw, which grows particularly well with wet windy conditions, so it's good for Orkney. Nowadays it's purely just grown for the chair backs, and the same straw that I'm using nowadays is the straw that David Kirkness used back then.

The first row’s nailed on to the frame and then it's built up row by row all the way to the top. It's really a continuous rope and you take the needle, which is a big five inch sacking needle, you put it straight into the centre of the previous row and you just loop it over the top, and that's one stitch done, and you go all the way to the side. And it's all done by look of the eye, the same way that they made them hundreds and hundreds of years ago, which is with no templates or jigs.

When I first started it was very hard on the hands. I used to be wrapped up in tape and things. A lot of people say to wear a glove, but you can't get the right feel for the back if you wear a glove. So it just means that you have hands like leather.

The chairs themselves are very crisp to sit in to start with, as in they're sharp on the back, but the more you sit in it, the more comfortable it gets. Therefore it goes with your own body temperature.

An Orkney chair is passed from generation to generation. And, traditionally, some people said the drawer was for the bible, some said it was for the bottle of whiskey and some both.

This display shows two versions of the straw backed chair, known as an ‘Orkney’ chair, made popular by David Kirkness. Kirkness began exporting them after a successful launch at the fifth Scottish International Exposition in Edinburgh in 1890. On the left is a chair that was probably made in the Kirkness workshop. On the right is a more recent chair made using traditional techniques by Reynold Eunson, who took over Kirkness's workshop in 1956.

Kirkness advertised four versions of the Orkney chair that share the same basic construction: the standard armchair for men, two smaller versions for women and children, and a tall hooded version.

On the left is an example of the hooded version of the chair. Made around 1910, it belonged to the artist Augustus John. Its softwood frame is almost black – scuffed, battered and water-marked – the straw back is a deep honey-brown. The hood that arches over the sitter’s head makes it half a metre or so taller than the chair to the right. Panels of softwood fill in the gap directly under the chair arms, so it's less prone to drafts. And under the seat is a single box drawer, with a metal handle in the shape of a lion's face.

The bottom of the chair is solid-looking, with thick square tapered legs. The seat is quite low. Two angled struts at each side support the armrests, which curve around the sides of the sitter, ending in a delicate scroll.

To make the chair back, oat straw is tied with sea grass to form a continuous rope. The first row of rope is nailed to the base of the seat, fastened to the upright on one side, then bent back on itself to create the next row. Each row is stitched to the one below, the top edge finished with a row of tight stitching. At the start of a chair's life, the straw is quite stiff, following the square contours of the seat. Years of use, though, cause the straw to soften and mould to the contours of the sitter’s back.

The chair to the right was made by Reynold Eunson in 1971. It has a Japanese oak frame. This, coupled with the fact that the chair was acquired by the Museum when it was new and therefore never used, means that both wood and straw are quite light in colour.

The chairs strike an interesting balance between the homespun and the refined. The materials, wood and straw, are natural, vernacular. The joints where arms and back meet the seat are left visible. But other design details, such as the tapering arm and back supports, create a sense of grace and elegance.