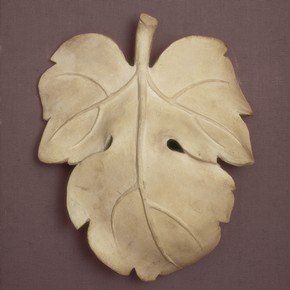 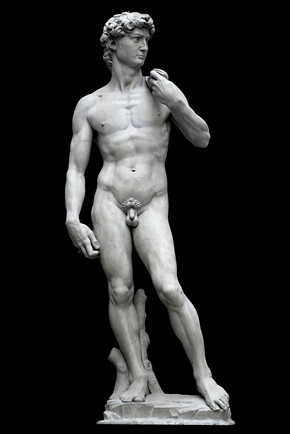 The statue of Michelangelo’s 'David' was originally presented to Queen Victoria by the Grand Duke of Tuscany in 1857, but was immediately given by the queen to the South Kensington Museum (now the V&A).

The plaster cast of a fig leaf, half a metre high, was made in London soon after the statue’s arrival and attached to the statue to spare the blushes of visiting female dignitaries.

The cast of Michelangelo’s 'David', taken from the original marble figure now in the Accademia di Belle Arti in Florence, was an early and unexpected acquisition for the fledgling Museum at South Kensington. Delivered to the Museum in February 1857, the massive cast - six metres in height - was a gift presented to Queen Victoria by the Grand Duke of Tuscany. The presentation of the cast was a gesture of diplomatic goodwill, following the grand duke’s veto on the export from Florence of a painting by Ghirlandaio, which the National Gallery in London had hoped to acquire. The Queen however had no prior notice of this large and somewhat unwieldy gift, and did not wish to house it.

The cast was therefore promptly re-routed by the Foreign Office to South Kensington. It was delivered to the newly completed so-called ‘Brompton Boilers’ - the first permanent buildings on the South Kensington site - and installed in a prominent position in the Art Museum, surrounded by both original works and other plaster reproductions. Later it was moved to the Architectural Courts (now known as the Cast Courts). Today it is displayed in the court devoted to reproductions of Italian architecture and sculpture (Room 46b).

The story goes that on her first encounter with the cast of 'David' at the Museum, Queen Victoria was so shocked by the nudity that a proportionally accurate fig leaf was commissioned. It was then kept in readiness for any royal visits, when it was hung on the figure using two strategically placed hooks. In a photograph of the Art Museum taken around 1857-9 the figure of David is shown wearing a fig leaf. The fig leaf is likely to have been made by the Anglo-Italian firm D. Brucciani & Co., based in London.

Male nudity was then a contentious issue. A letter sent to the Museum in 1903 by a Mr Dobson complained about the statuary displayed: 'One can hardly designate these figures as "art" !: if it is, it is a very objectionable form of art.'

In relation to Mr Dobson’s complaint, the then director Caspar Purdon Clarke noted: 'The antique casts gallery has been very much used by private lady teachers for the instruction of young girl students and none of them has ever complained even indirectly' (museum papers, 1903).

Tin fig leaves had been used during the early years of the Museum on other nude male statuary, but later authorities at South Kensington were dismissive of objections. Nowadays, the fig leaf is no longer displayed on the David. Instead, it is housed in its own case on the back of the plinth of the figure.