Frank Lloyd Wright was born in Richland Centre, Wisconsin in 1867 and died in Phoenix, Arizona in 1959.

Frank Lloyd Wright is widely viewed as the foremost American architect of the 20th century. He designed more than a thousand buildings during his career.

Born in the Midwest, he spent much of his professional life there, though he also practised in California, New York and Japan. He married his first wife in 1889 and had six children. An irascible personality meant his life was peppered with personal scandal and financial worry.

Furniture was integral to Wright’s design philosophy. He believed that architecture, interiors and furnishings must arise from the same conceptual principles - an approach he described as ‘Organic Architecture’. 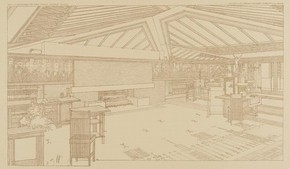 Wright hated the fussy, historicist furniture available in America in the 1890s. His concept of ‘Organic Architecture’ required furnishings to ‘be of the building itself’ - to reflect the same design principles and materials as the architecture.

To fulfil this ideal, Wright had to design his own furniture, despite having little wood-working experience. Strongly influenced by the British Arts and Crafts movement, he started in 1889 with his home in Oak Park, Illinois. Here he designed simple furniture in local oak that he felt reflected contemporary American democratic ideals.

For corporate settings, his furniture was more structurally and functionally innovative, and often made of metal. 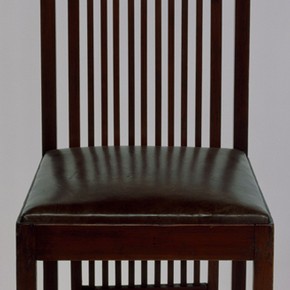 Unlike many European Modernists, Wright did not advocate standardised, functional furniture, but rather designed each item for a unique interior, use and client.

In both architecture and furniture he was preoccupied with geometric forms and strong intersecting planes. The furniture was ‘architectonic’ in that it was architectural in character. Wright’s built-in furniture harmonised with the materials and scale of interiors. The free-standing furniture, when arranged as a group, could create an intimate, secondary space within a room.

Decoration was to be integrated into, rather than applied to, a surface or architectural element.

Given the bespoke nature of Wright’s designs his furniture was available to only a small number of clients until late in his career. But unlike Arts and Crafts designers, Wright saw the value of machines. He extolled their ‘wonderful cutting, shaping, smoothing and repetitive capacity’, which could master, with ease, the signature square-section spindles of his chairs.

But not all firms were willing to take on Wright’s unusual designs. He often had to seek out small specialist firms to produce his furniture using a combination of machine tools and hand-finishing.

My name is David Adjaye and I’m an architect and furniture designer.

When you’re designing a building which profoundly moves you, there is a kind of incredible desire to create furniture that lives to that ambition. Because when you create a piece of architecture which moves an agenda on, you find that what it does is that it dislocates itself from the products that are in that time. And so as an architect or as a designer, you want to bring the components that are of the lived world into that place too. So you don’t want the architecture just to be alone and then to have furniture that kind of exists from another period. So I completely identify with Frank Lloyd Wright’s desire to make the furniture connect with the space and with the kind of agenda of the architecture, because then you have a complete ensemble.

Frank Lloyd Wright, for me, was one of those people that really dreamed about what the future could be. So when you look at the chair on the left, which is the more traditional high back done at the turn of the century, I mean it was actually quite radical for its time. But when you jump to the Larkin Building and realise that those two are more or less in the same time period, you realise that here is Frank Lloyd Wright really embracing the future. This could be something out of Metropolis, that great film in the ’20s. It celebrates construction, the sort of screws are completely left exposed, nothing is finished and smooth as in the chair on the left. This chair on the right is even a bit daring, you know, it sort of moves from four legs to three. It’s really a little bit crazy as a structure!

I’m trying to imagine 1904. I’m thinking of the fashion, I’m thinking about the clothing and the dress sense of people, and this extraordinary robot. It’s the first encounter with a robot and it’s your chair, it serves you. Suddenly, somebody who works in this environment has this extraordinary feeling of being brought into a kind of special world, that every time they encounter the furniture and the space, they are transported into something that’s uniquely magical, because there would have been nothing like it around at that time. And what a pleasure for furniture to give the quality of your life.

My name is Christopher Wilk and I’m Keeper of Furniture, Textiles and Fashion at the V&A.

What I think is so interesting about these chairs is that to see them on their own in a museum we look at them as beautiful objects, but they can only really be understood in the context of the buildings for which they were designed.

On the screen in front of you, you can see pictures of the original interiors that these chairs came from.

The high back dining chair was part of an oak panelled room filled with oak furniture, but a room with stained glass windows all around the sides and above, so there would have been light flooding into this dark interior. And the effect of light behind the backs of the chairs must have been something that Wright had in mind. He had this composition of four or six or eight dining chairs that could be pulled round a table in the middle of the room, creating an architectural space of its own. And Wright was very interested in using furniture to define the space of his interiors.

In the case of the Larkin building chair, the brown metal chair, it was in a soaring space where down in the floor, down at the very bottom, there were rows and rows and rows of desks and chairs for the workers who worked processing the mail orders that came in for this soap company.

In the case of the red Johnson Wax chair above, this was part of a large series of desks and chairs for the administrative offices of a large corporation. And we know that some of the staff complained about the fact that they teetered on this three-legged chair sometimes.

In this display are three early 20th-century chairs – on the left a tall, straight-backed dining chair in oak, stained to a rich red-brown, and on the right, one above the other, two smaller metal office chairs on casters. These chairs are all so different it’s hard to believe they were designed by one man – the American architect Frank Lloyd Wright. He regarded a building and its furniture as a single entity. So each chair reflects the characteristics of the building it was intended for.

The tall wooden chair, designed for a house influenced by Japanese aesthetics, is solid, almost severe. It has a shallow flat seat pad in brown leather, and four legs joined low down by an H-shaped stretcher. The back legs continue upwards one and a half metres to form the frame of the high chair-back. Squeezed between them are eleven vertical slats reminiscent of a Japanese screen – the gaps between just wide enough to counteract the chair’s heavy appearance. The starkness is softened further by the way the two uprights taper almost imperceptibly – and because their feet flick out and back slightly and their tops bend backwards like little ears.

On the right is an office chair in scuffed brown metal – steel painted to look like copper – and with a seat pad of dark leather. The chair has three legs – two at the front, and one at the back. It looks like a robot constructed from bits of filing cabinet and oversized Meccano, the screws proud of the surface. The robot’s ‘head’ is the backrest – a rectangle, almost as wide as the chair, on a central upright, that continues down to make the back leg. The ‘eyes’ are two decorative grids perforating the backrest with little square holes. Below the backrest, a horizontal bar curves round widening into rectangular slabs that form the arms. A vertical bar supports each arm and continues down to make the front legs. All three legs end in a rubber-wheeled caster.

The third chair, displayed above, is also three-wheeled but arranged like a tricycle, with one at the front and two at the back giving it a mischievous hint of instability. The chair seems fluid and dynamic – made of curved lengths of tubular steel, widely spaced with smoothly welded joints. It has a circular upholstered seat and backrest. Metal and fabric are pinky-red. The backrest pivots between two uprights that form the back legs. The seat rests on a semi-circular bar that curves forwards from the uprights and another semi-circular bar below forms a footrest. Between these bars, on each side, are three short curved rungs like a ladder. The front of the seat is supported on a third upright. The arms are long rectangles of pale laminated wood supported by a bar curving up to meet them – so the whole chair resembles a waiter balancing two trays.