Some of the outstanding illustrators and artists of the day were recruited to provide images for Charles Dickens's novels, often producing illustrations at short notice for forthcoming chapters. Dickens’s first writing commission was to provide text for prints by Robert Seymour (1800-1836), who created the first set of images for what became The Posthumous Papers of the Pickwick Club (1837).

After Seymour’s suicide, the set was developed by the illustrator Hablot Knight Browne (1815-1882), who adopted the pseudonym 'Phiz' to match Dickens’s 'Boz'.

Phiz went on to create illustrations for ten of the novels, and was among Dickens’s main illustrators for over two decades. His output included sets of images for Martin Chuzzlewit (1843-1844), David Copperfield (1849) and A Tale of Two Cities (1859).

Dickens’s other long-term collaborator for illustration was George Cruikshank (1792-1878); in the V&A Print Room are drawings, proofs and sets of images for Sketches by Boz (1836), the Mudfog Papers that appeared in Bentley’s Miscellany in 1837, and Oliver Twist, the latter with the draft cover design of the 1846 monthly parts.

The art-work, drafts and complete illustrations by Luke Fildes (1844-1927) for Dickens’s last – and unfinished – novel, Edwin Drood, are also in the Museum’s prints & drawings collections. 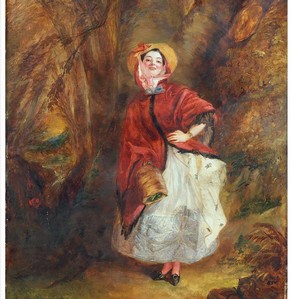 As a result of the writer’s success, scenes from the novels were also frequently taken as subjects for paintings, which could then be made reproduced in other formats. Particularly popular was Dolly Varden, a celebrated character from Barnaby Rudge (1840-1841), who featured in an oil painting by William Powell Frith (1842). In later years Dolly Varden also appeared in a series of wall-paper designs, as a doll and as a pattern for a skirt. The painting of Florence Dombey (1888), from Dombey & Son (1846-1848), by William Maw Egley (1826-1916) was also subsequently reproduced in many formats. An indication of the enduring popularity of this novel comes in an elaborate Christmas card by an unknown artist of about 1870. Particularly successful was the watercolour of 1867 by George Cattermole (1800-1868) of the grave of ‘Little Nell’, a character in The Old Curiosity Shop (1840-1841). Little Nell’s death had provoked what amounted to national mourning when the latest twist to the storyline was published in February 1841.