Inside the World of Couture 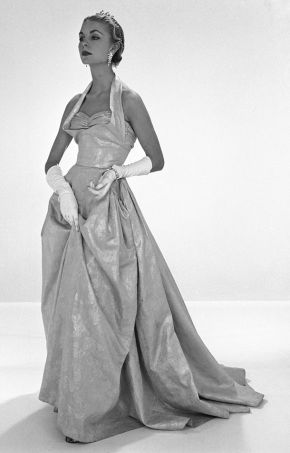 Each house was named after its creator and had a characteristic style. Some lasted for generations; others only as long as their founders were alive.

A leading house such as Dior employed hundreds of people. On the ground floor there was a boutique and upstairs a luxurious grand salon for showing the seasonal collections. A personal saleswoman (vendeuse) attended to each client, while fitters, tailors and seamstresses toiled away behind the scenes.

The London couture trade took Paris as its model. Many British designers trained in Paris, and although London could not compete in terms of output, its fashion and textile industry became increasingly profitable.

For France, the couture industry was vital to the economy. In 1949 Dior alone provided 5% of France's national export revenue.

In the early 1950s, a leading Paris house would typically employ between 500 and 850 staff in the different departments. In the flou workshops, dressmakers worked delicate fabrics entirely by hand to create blouses, skirts and dresses. Dior described them as having 'doigts de fées' - fairy fingers.

Before the Second World War bespoke fashion in London was mainly the work of tailors and court dressmakers. With the creation of the Incorporated Society of London Fashion Designers in 1942 the small community of couture designers - 12 as opposed to 47 in Paris in 1943 - gained increasing recognition.

The Paris couture system of unifying design and production under one roof set a template for London couturiers, as did the French practice of showing biannual collections.

The London fashion houses, centered on Mayfair and Savile Row, became known for their practical, beautifully made tailoring. In 1946 the journalist Alison Settle described London couture as 'clothes which have social confidence'.

Cristóbal Balenciaga was regarded by many, including Christian Dior, as 'the master'. He moved to Paris from Spain in 1937 and by 1952 had 232 employees. The house produced 356 designs per year - less than half of Dior's production of 815.

Balenciaga was the most exclusive fashion house in Paris, and clients were admitted only after a personal introduction. The Countess Bismarck dressed exclusively in his designs, down to gardening shorts, and locked herself in her room for three days when he retired.

Balenciaga was renowned for reworking the sleeves of his garments even when they were being worn by a client. Cecil Beaton wrote: 'Balenciaga uses fabrics like a sculptor working in marble.'

Couture clients invested time and effort into commissioning their wardrobes, and the relationship with the designer was an intimate one. Hardy Amies wrote, 'It is often forgotten that we execute orders: we do not sell clothes. If you went into the Boutique you would buy a suit, but if you walk upstairs you order a suit. At the fittings you will be able to express your desires as to the position and finish of many details. The whole process should be a harmonious co-operation between designer, tailor and customer, with the saleswoman as a sort of referee'.

Cocktail dresses first appeared in the 1920s and gained a new popularity after the war. They were worn at early evening or '6 to 8' gatherings, where guests usually stood and mingled. The gowns could include complex bustles and skirt details, which would be crushed if sat on.

In his book, 'The Little Dictionary of Fashion' (1954), Christian Dior described cocktail dresses as 'elaborate and dressy afternoon frocks', preferably in black taffeta, satin, chiffon and wool. These confections became the personification of the 'little black dress' and were often accessorised with gloves and small hats.

Sumptuously embroidered and accessorised with jewels, these gowns provided a glittering show at receptions and balls, the opera or the theatre. Some were specially commissioned for a specific occasion, and worn only once. Many couturiers were also willing to lend expensive gowns for important diplomatic and state occasions.

The creation of couture was a matter of national pride, particularly in France. Christian Dior said, 'My mannequins sail forth like a brilliant armada, all sails flying, going forth to conquer the world in the cause of the new fashion.'

This content was originally written in association with the exhibition 'The Golden Age of Couture: Paris and London 1947–1957', on display at the V&A South Kensington from 22 September 2007–6 January 2008