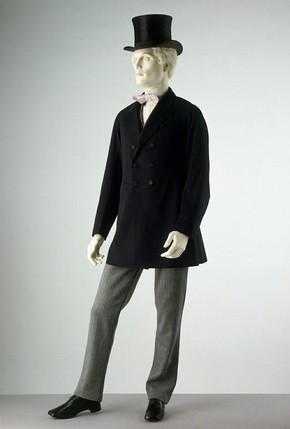 By the early 19th century men's fashions had also undergone a radical change. The coat still finished in long tails at the back but was cut higher in front. The waist-length square-cut waistcoat showed beneath it. The lining of the shoulders and upper chest of the coat was sometimes quilted to improve the fit. In the early 19th century some dandies wore boned corsets to give them a small waist.

Gradually men adopted long trousers rather than knee breeches. Trousers became increasingly fashionable in the first quarter of the 19th century. At first they were only worn for day and informal dress but by the 1820s they were acceptable for evening wear. Breeches continued to be worn at court.

The tall hat from the late 18th century was still worn and developed into the top hat which was worn for day and formal dress throughout the 19th century. Hair was carefully styled into a windswept look or worn short and curled.

During the second half of the 19th century men retained the white waistcoat and black tail-coat and trousers of the early 19th century for evening wear. For day wear they wore a frock coat with straight trousers, a short waistcoat and a shirt with a high stiff collar. The single- or double-breasted frock coat fitted quite closely to the torso and had a waist seam. The skirts were straight and finished at mid-thigh or below. The front of the coat was square cut. Hair was still styled but by the late 19th century it was short and cut close to the head. Many men had beards and moustaches.

As the 19th century progressed women's dress gradually revealed the actual form of the body. In the 1820s and 1830s the waistline deepened, returning to its natural position. As the natural waist returned the bodice required a tighter fit and in contrast the skirt became fuller and bell-shaped. There were several different sleeve styles but short puffed sleeves were generally worn for evening and long sleeves for day. Corsets continued to be worn. These were lightly boned and quilted, with a deep busk. Several layers of petticoats with frilled hems, sometimes of horsehair, were worn to support the full skirts. Some petticoats of the 1840s were feather-quilted. Later examples of the 1850s and 1860s were made of 'crin' and steel hoops. The term 'crinoline' is derived from the French word crin which means horsehair. 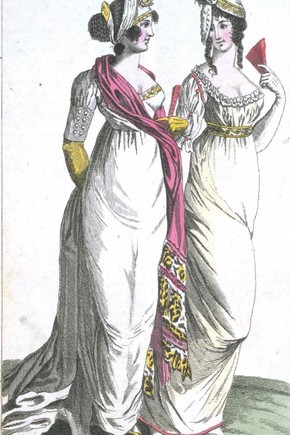 This fashion plate from 'Ladies' magazine of 1801 shows the characteristic high waistline of the time. Museum no. E.249-1955. © Victoria & Albert Museum, London 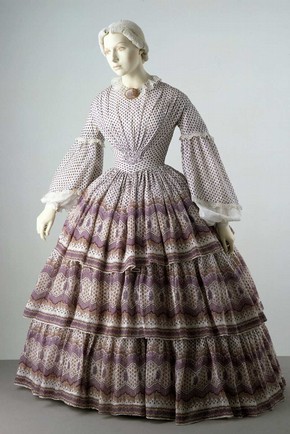 Dress with a pattern that complements the shape created by the cage crinoline worn underneath it. Museum no. T.702-1913. © Victoria & Albert Museum, London

Bonnets or hats were worn outdoors and linen caps indoors. During the 1820s hair styles became very elaborate with raised top knots and the crowns of bonnets or hats were designed to accommodate them. By the middle of the century, by contrast, hairstyles had become smooth with a central parting finished with ringlets on either side of the face and a small bun at the back or simply swept back from the face to a chignon (a mass of hair arranged on a pad at the back of the head and held in place with a net or snood). Bonnets and hats continued to be worn until the 1860s when small, elegant styles appeared which simply perched on top of the head. Even smaller hats appeared in the 1870s when hairstyles rose in the form of elaborate chignons. In the 1880s and 1890s hairstyles remained `up' but did not retain the heights or bulk of the 1870s styles. Small hats decorated with birds and feathers and artificial flowers were fashionable.

In the 1860s the skirt was very full and worn over a cage crinoline, a petticoat supported by a frame of steel hoops that held it away from the legs. A boned corset was worn over a chemise. Large shawls were sometimes worn indoors or outdoors instead of a coat or cloak.

The 1870s to 1880s introduced styles that revealed the natural silhouette. A popular style was the `princess line' dress, which was made without a waist seam to reveal the figure. Skirts fitted tightly and required streamlined all-in-one underwear combinations. Corsets became longer and were more rigidly boned. The busk, known as the spoon busk because of its shape, extended to the stomach. Sleeves were tight. In the 1880s a bustle pad, or a tier of stiffened horsehair or fabric frills, was introduced. After 1887-1888 the bustle went out of fashion. Hair was curled on top and taken into a bun at the back. Often a ringlet was brought forward over the shoulder as a finishing touch.

By the 1880s an elite group of women began to adopt simpler and easier styles that were known as `artistic' dress. Artistic dress was cut much more loosely than conventional attire and did not require restrictive corsetry to be worn.

During the last years of the 19th century it was fashionable for women's hair to be arranged on the top of the head in a bun and puffed out around the face. A large-brimmed hat would be fastened on with hat pins unless a simpler, smaller hat, such as the straw boater, was required for informal dress. The skirt was floor length with a slight train. The waist remained small and a corset which either laced up or fastened with clips was generally worn. A small pad was worn at the back of the waist to support the skirt. In the 1890s the top of the sleeves were sometimes puffed into an enormous leg of mutton' shape which required lightweight stiffening or padding. The neckline for day wear was very high featuring a stand-up collar in a lightweight fabric which was boned or wired around the edge to hold it up under the chin. Women adopted a simple and rather masculine-looking shirt, jacket and skirt for day wear.

By the 20th century the pace of change in the fashionable silhouette became ever more rapid as the expanding fashion industry, in conjunction with the media, became more effective at stimulating demand for a constant flow of new styles. 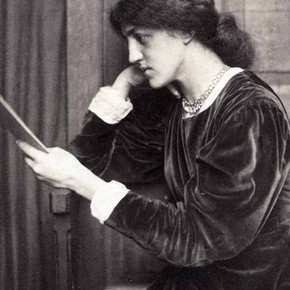 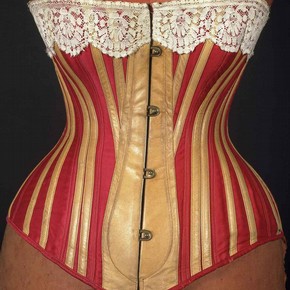