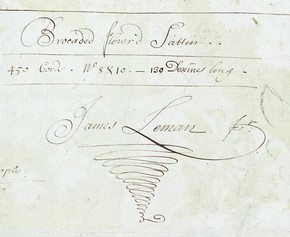 James Leman was born in 1688 into a weaving family of Huguenot descent. In 1702 he was apprenticed to his father, Peter, and lived in Stewart Street, Spitalfields, with his family. Peter was described as a 'natif de Canterbury' and the family is possibly descended from one which fled to Canterbury from Tourcoing to escape religious persecution in the late 16th century.

James Leman trained as a designer as well as a manufacturer, which was unusual for weavers at that time. Geoffrey Smith's Laboratory or School of Arts (1756 edition) records that every Lyon manufacturer was a pattern drawer but

'On the contrary here in England, take London and Canterbury together, I know of no more than one manufacturer thus qualified, as was the late ingenious Mr Leman in his time.'

The Victoria and Albert Museum's earliest designs by him are dated 1706, just four years into his apprenticeship. Some are inscribed 'For my father, Peter Leman, by me, James Leman'. In 1711 he was admitted as 'For[eign] Master' to the Weavers' Company, and on his father's death in 1712 he took over the family business.

As well as producing his own designs for silks, James Leman hired other designers, notably Christopher Baudouin and Joseph Dandridge, who were both well known in their day.

The latest designs known to be by Leman are dated 1722, but it is likely that he continued to work after this time. Part of the canopy used at George II's Coronation in 1727, now in the V&A's collection, was supplied by the mercer George Binckes who was known to have bought designs from Leman. It is very similar in style to his work and may well have been designed by him.

Leman rose to high office in the Weavers' Company, becoming a Liveryman and member of the Court of Assistants. In 1731 he was elected Renter Bailiff, second-in-command in the Company. He was energetic and capable, and worked on a number of committees supporting the interests of the Weavers' Company. He was actively involved until his death in 1745, when he was helping to organise a campaign against the sellers and wearers of printed calico.

James Leman had a wide range of talents and interests. His will testifies to this. In it he asks his wife to distribute to his surviving children: