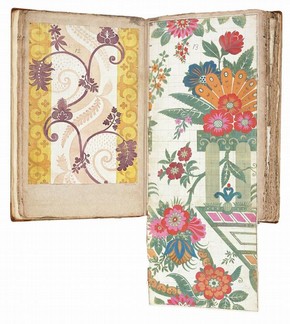 The album contains 97 designs for woven silk, painted in watercolour. Most date from 1706 to 1716, but there are also a few from about 1730. They are bound with two anonymous designs of about 1840. The designs are mounted on 47 pages of thick paper, half bound in soft morocco leather, probably in the mid 19th century. A label of J. Vanner and Sons is pasted on the front cover.

When the album is opened some of the designs are folded to fit the format of the book. We do not know when this was done, although a similar album containing folded designs exists from the first half of the 18th century, which suggests it may have been an accepted practice. While the binding of the album is mid 19th-century, the paper on which the designs are pasted is 18th-century.

If you look at the image on the right you will see a pencil number. This number is an example of the marking found at the top of each page of the album. Natalie Rothstein, former Keeper of Textiles and Dress used these numbers in her catalogue. 'VS' stands for Vanners Silks (Vanners and Co. Ltd) which owned the album when it was catalogued in Silk Designs for the Eighteenth Century in the Collection of the Victoria and Albert Museum (London, Thames and Hudson, 1990).

The album complements an unbound group of designs by James Leman and by two designers working for him, Joseph Dandridge and Christopher Baudouin, which were acquired by the museum in 1909 and date from 1717 to 1722. They can be seen on application in the Prints & Drawings Study Room at the V&A. 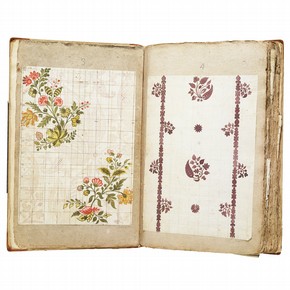 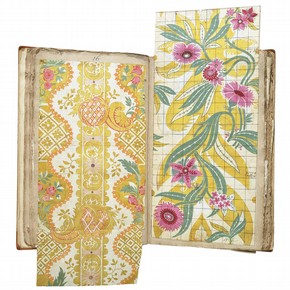