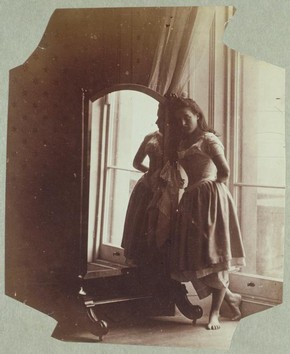 Hawarden's work was admired by many critics, including the photographer Oscar Gustave Rejlander, who observed that she 'aimed at elegant, and if possible, idealised truth'. Hawarden's contemporary, Julia Margaret Cameron, gave her photographs specific titles, used close-up and blurring to achieve desired effects, and actively sought to promote her work. In contrast, Hawarden didn't title her photographs, but exhibited them as 'studies'. Rather than focusing on the faces of her sitters, as Cameron did, she used the surroundings in the room, as well as backdrops and fabrics, to add to the composition.

After her early stereoscopic landscape photographs taken in Ireland, Hawarden focused on her daughters. Her work records the life and interests of an upper-class mid-Victorian family. Male photographers at that time often set off to explore faraway places. As a woman Hawarden had to work close to home, but by creating these enigmatic images of her daughters, she staked out new perimeters for art photography.

With careful choice of props, clothing, mirrors, balcony, and posture, Hawarden produced exquisite studies of her adolescent daughters. The figures and dress are the main subject, carefully framed in the room, and often in front of the balcony. The city beyond often provides a blurred background.

The writer Carol Mavor in Becoming: The Photographs of Clementina, Viscountess Hawarden suggests that the often provocative poses of Hawarden's daughters are significant. The Victorians were bothered by the idea of sexuality and adolescence, and in 1861 the Offences Against the Person Act raised the age of consent from 10 to 12. This was also the year in which Hawarden began to make this kind of photograph, though there is no evidence that she was deliberately exploring this controversial topic.

Hawarden liked to use natural light in her studio at her South Kensington home, in a way that was seen at the time as 'daring'. She placed mirrors to reflect light and used them to explore the idea of 'the double', just as other photographers (and occasionally Hawarden herself) used a stereoscopic camera to produce twin prints.

From around 1862 Hawarden concentrated on photographing her daughters in costume tableaux, a popular subject at the time. Costumes from the dressing up box are combined with dresses at the height of fashion to produce beautiful and detailed studies that confound the contemporary with the make-believe.