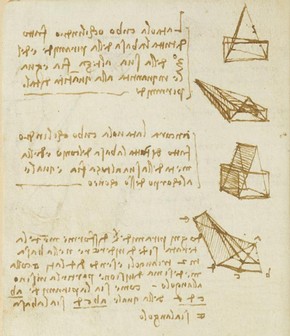 The V&A has in its collections five of Leonardo da Vinci's notebooks. They reveal how he thought on paper and contain some of his most complex and challenging designs. Although many other artists, inventors and scientists have brainstormed on paper, none of Leonardo’s predecessors, contemporaries or successors used paper quite like he did. The intensity, variety and unpredictability of what happens on a single sheet are unparalleled.

Behind the diversity are a series of unifying themes in Leonardo’s vision of how the world works. The dominant theme is the mathematical operation of all the powers of nature.

Every small part of nature mirrors the action of the whole, and the human body is specifically a 'lesser world' – lesser in scale but not in wonder and complexity. Everything is related to everything else. Leonardo saw connections where we see only differences.

Drawing serves as the primary tool of analysis and the most potent way to show the essential unity of all things designed by nature. The human designer acts as a 'second nature' in the world, inventing images and machines in harmony with natural laws.

Yet for all the intellectual analysis and measured description, the drawings retain an extraordinary ability to engage us in the living nature of the world, in human motion and emotion, in the violence of battle and in the elemental force of cosmic powers.

The measure of all things

For Leonardo, sight was the noblest and most certain sense. It provided access to 'experience', which shows us how nature works according to mathematical rules. Any knowledge that could not be certified by the eye was unreliable.

He investigated the relationship of the eye to the brain. He proposed a system in which visual information was transmitted to the intellect via the receptor of impressions and the 'common sense', an area where all sensory inputs were coordinated.

The human body was God’s most perfect design, based on a complex set of proportions. A man with outstretched arms and open legs can be inscribed within a circle and a square (as the ancient Roman architect Vitruvius had claimed). There were also detailed proportional relationships between all the various parts of the face, torso and limbs. 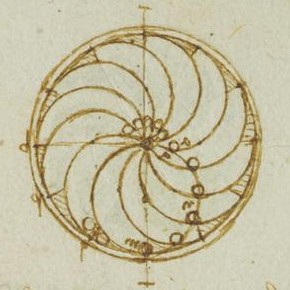 The rule of proportion

The building blocks of basic geometry underlay the beauty of natural form. Leonardo provided ingenious illustrations for the treatise that his mathematician friend, Luca Pacioli, wrote on the five regular or 'Platonic' solids and their variants. He also strove on his own behalf to solve a series of classic problems in flat and three-dimensional geometry.

Divine geometry in nature was most apparent in the action of light. Here, all the powers of nature act mathematically and obey the rules of proportion.

Proportion was also expressed in number, most notably in the harmonies of music. Proportional formulas allowed Leonardo to work complex variations on weights suspended from balances and to show why the quest for a perpetual motion machine was doomed to fail.

The body and the earth

The theory of the microcosm and the macrocosm was ancient. It stated that the human body contained in miniature all the operations of the world and universe as a whole.

Leonardo wrote of analogies between rocks and bones, soil and flesh, rivers and blood vessels. He spoke of the 'body of the world', 'veins of water' and the 'tree' of blood vessels.

This analogy served as a tool of explanation. He explained that the old are enfeebled because of the tortuous and silted up nature of their blood vessels.

He investigated the nature of water in motion and its behaviour in the 'body' of the earth. As a 'Master of Water', he was consulted by the Florentine authorities at a time of war. He also devised a canal to bypass the un-navigable stretches of the Arno. 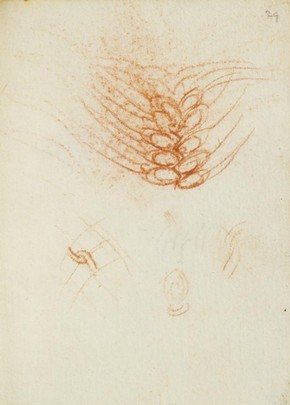 In the last phase of his anatomical researches Leonardo focused on the design of the heart, and most notably on the operation of its valves. His drawings appear to be based on the heart of an ox.

For Leonardo, the tricuspid valve (formed from three geometrical cusps) was a piece of living geometry that proved his ideas about the mathematics of nature. Modern science has confirmed his detailed studies of its structure and the vortex motion of the blood.

Leonardo was fascinated by turbulent motion. Vortex motion was especially powerful, since a vortex speeds up towards its centre. Using meticulous observation and intricate theory, he created compelling images of water in spiral motion. It reminded him, typically, of the curling of hair.

Leonardo performed many roles and undertook many tasks for his court patrons. He performed many of his duties with enthusiasm. However, they took him away from the making of paintings and sculpture, upon which he pinned most of his hopes for fame.

Architecture was the most prestigious of these activities. He developed an innovatory vision of architecture as a way of shaping space. He depicted buildings as sculpted forms and as solid sections. He designed canals and basins as settings for buildings.

Each part of a Leonardo building obeys the rules of proportion. He investigated the structural properties of different architectural forms.

He was able to represent with extraordinary plastic clarity the structure of a spiral staircase in one of his schemes for a palace for the French king. 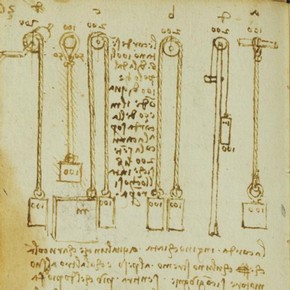 Leonardo was renowned as a maestro (master) of entertaining devices at courts and in noble houses, particularly those involving water. He invented ingenious water clocks and fountains. His planned water clock for the French governor of Milan was elaborately automated, with a mechanical man as a bell-ringer.

He also contrived underwater breathing devices for use in times of peace and war.

Another activity was the creation of spectacular theatrical designs, including one for an opening mountain, which reveals Pluto, the god of the underworld. The god’s infernal companions make cacophonous noises on specially designed instruments. Leonardo was closely involved with instrumental and vocal music for the courts, and was an accomplished musician himself.

He studied how the tongue and lips shape the sound of the voice in speaking and singing.

Leonardo’s vision of the natural world was extraordinarily dynamic. Force was the key to the vision. The application of force was necessary for anything to move. Motion gave life to all things but also exercised a huge destructive potential.

The human body was at the centre of his vision. Bodily movements expressed the 'motions of the mind'. These motions were essential for the painting of convincing narratives. Leonardo’s 'cinematographic' images of little figures in action portray the continuity of motion in space in a way that no one had captured previously.

As an engineer Leonardo’s supreme ambition was to amplify human motion so that man-powered flight might become possible. The key, as always, lay in nature, above all in the study of flying creatures and their anatomy. 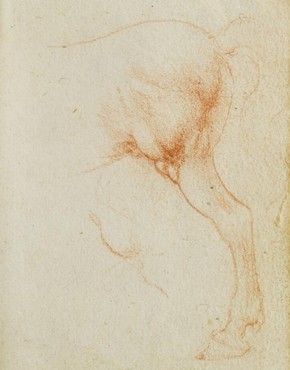 Leonardo described war as 'beastly Madness' and wrote 'prophecies' and 'fables' about the horrors of its weaponry and destruction. Yet he was fascinated by military engineering and the harnessing of power on a huge scale. He devised chariots in the ancient manner, weapons systems and projectiles.

His representations of battles depict the savagery of conflict as never before. Humans and animals fight in violent concert.

One small drawing depicts an extraordinary vision of 'beastly Madness', so intensely tangled that we can hardly discern one combatant, animal or human, from another.

The ultimate expression of force in the natural world is witnessed in dreadful storms. Wind, rain, waters, trees, soil and rocks are wrenched up in whirling cataclysms. Whole mountainsides are torn apart and explode with elemental fury. Beside such forces, human power remains puny.