Artist Mat Collishaw was commissioned to animate the Museum's architecture with a work of haunting beauty. A monumental zoetrope – the cylindrical device first designed in 1834 to project a rapid succession of images to simulate motion – was the result. Over the winter and spring of 2010–2011, 'Magic Lantern' transformed the Museum's edifice into a beacon of light, brought to life by fluttering moths visible from dusk each evening.

Exploiting the theme of enchantment to the full, Collishaw played with scale, much like Lewis Carroll in Alice's Adventures in Wonderland by grabbing the attention of South Kensington passers-by with his monumental fluttering moths in the Museum's uppermost dome, the crown cupola.

This commission was accompanied by a smaller replica zoetrope which animated the John Madejski Garden during the day, allowing a close-up view of the enchanting motion of moths in flight. 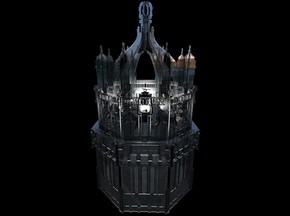 Artist Mat Collishaw (b.1966) is perhaps best-known for his inclusion in seminal YBA (Young British Artist) exhibitions including 'Freeze' (1988) and 'Sensation' (1997), having since built an impressive body of work spanning photography, film and installation using combinations of technologies new and old.

His subject matter juxtaposes traditional notions of beauty and innocence with disquiet and the uncanny. The moth is an apt reference: its beauty and delicacy belying suggestions of things Gothic and haunting.

The V&A's Contemporary Programmes has established a legacy of publicly and critically acclaimed new media commissions including 'Volume' (2006), 'Forever' (2008) and 'Mirror, Mirror' (2009). This ambitious project, however, propels Contemporary's interventions in a new direction, using remarkable heights of the Museum for site-specific work.

Supported by the Friends of the V&A

I am terrified of heights. It' s not that I don' t like them, it' s just that I always have the compulsion to jump if they' re there. It' s kind of like a physical Tourettes that I' ve got which is pretty strong and not really very helpful for this project at all.

The brief that we got from them was just to present something up in the cupola on top of the Victoria and Albert Museum that somehow related to the history of the Museum and embraced new media. It was something that celebrated the Museum as a beacon of culture and knowledge from around the world. And I use quite a lot of optical toys that come from this kind of period. The zoetrope is pretty much a Victorian invention. It was born roughly about the same time. It' s a very primitive form of animation, it' s something that preceded the cinema., it was the first time we actually got an animated sequence of images.

It couldn' t have been designed better for me. I could have had the apertures a little bit thicker between the pillars here to give you more visibility, so you' ll be seeing things through those little slots as it goes round which kind of goes back to the original zoetrope actually based on little slots all the way round the periphery.

A three-dimensional zoetrope is a fairly new innovation on that technique and it uses actual three-dimensional models so instead of a picture it' s a thing. In my case things made out of plastic. Those little things, those models or figures have increments of animation in them. So for example if it' s a little character, it' s one like this, one like this, one like this. There on the side of your disk, the disk rotates, and instead of having like a shutter, you have a stroboscopic light, which flashes in sequence with that object, so as the object passes in front of you, you see it, when the light' s off you don' t see it. You are limited to the kind of subject you can deal with because it is something that has to be identifiable from quite a long way away. The nearest you get is eighty-two metres.  Also the fact that it' s up on top of a building limits what realistically could be going on up there. Immediately it came down to two things which were bats in the belfry, or moths around a lantern.

As they wanted to present something which was the Victoria and Albert Museum as a beacon of knowledge and culture and learning, moths around a lantern seemed to kind of make the project itself. I' m building a smaller version of the same thing downstairs here in the garden. Something that generally wouldn' t be visible in any kind of ambient light, particularly not outside, but for this project I' ve made an innovation which is the first time I think it' s ever been done, which should make this little optical illusion viewable in daylight.

The largest zoetrope that I' ve built before has been two metres wide, which I thought was pretty big. This will be more like ten metres wide so it' s quite a huge increase.  Not only is the project bigger, bigger than normal for us, the whole, the project in itself is, the phrase I can think of is punching above its weight. This is very very tricky. It' s tricky at the best of times. They' re tricky to make them that big but they' re really tricky to put them on top of the V& A, that' s something else.  One of the most challenging parts of the job is actually designing it so it can fit through the hole at the top of the space but also designing it so that we weren' t breaking it down in to suitcase type pieces because we' ll be assembling it up there for years otherwise.

There was a few different ideas on how to make a wheel that big but the most simplistic one was the bicycle wheel. So Mat' s worked with Georgina, his assistant and they' ve developed the colour scheme on this as well and she was heavily involved in the last zoetrope as well so she developed the whole paint system for it and also the team of interns that it needs to be able to get this done because without that kind of hands on number crunching painting craft, things like this don' t happen. So the effect of all this work is to produce 3D animation. It' s utterly convincing and nothing quite prepares you for the first time, well I saw it.

The bottom moth is probably roughly about this kind of position here and then two more levels above it. The LED, the actual lighting for it is going to be in some kind of little device like this, which is going to be against the wall. One, two, three, four, eight of them all the way round so there' s light all around it. And then what you should also get is the light flashing up, hitting the moths creating moth like shadows on the ceiling, which are flickering away as they flicker as well. There' s a certain unknown quantity about what is actually going to happen because it' s quite a peculiar space.

So this is the night before it opening, we' ve still got some technical problems now and because we' re right above the top of the Museum, any little component that we need we have to send somebody down about sixteen flights of stairs so I' m a little bit nervous at the moment that we' re actually going to pull it all off.

I' m pretty happy with the way that it' s all come together in the time that we had which was very, very limited. Generally a medium sized two-metre zoetrope would have taken me six months, here we' ve got a ten metre one that has had to be done in two months. It' s kind of Mission: Impossible.

So I' d like to have created something that' s very beautiful and beguiling and brings people in to look at it but I' d also like to smuggle in a little bit of doubt in there about what it is they' re actually becoming engaged with when they' re looking at the work. Hopefully the people when they actually arrive at the Museum, when they see this thing, they' re going to be drawn to it, like moths to a flame. They don' t really know why they are looking or being attracted to this thing and it may be not a perfectly healthy thing to be engaged in but it' s something they can' t help being drawn to.