Today, very few men wear skirts. While it is permissible for women to wear trousers, if a man wears a skirt in public he risks ridicule. Associated as they are with women’s clothing, skirts have become potent symbols of femininity. The idea of men in skirts blurs the visual distinctions between the sexes. It contradicts how men are expected to look and, more fundamentally, challenges ideal attributes of male behaviour. A man in a skirt is not only perceived as looking feminine but being feminine.

In the West, men have not always worn trousers. It was with the evolution of tailoring from the 14th century that bifurcated garments gradually became associated with men’s dress and masculinity. Previously, both men and women wore draped or unshaped garments and tunics. As men’s tunics became shorter and tighter-fitting in the 15th century, fashionable men began to wear hose or stockings as outer leg wear. By the 16th century they had adopted breeches and by the early 19th century trousers. Long gowns and full-skirted coats, however, remained part of fashionable men’s wardrobes until the early 20th century.

Since the 1960s, several designers have attempted to re-introduce the skirt as an acceptable form of male attire. Frequently borrowing styles from other times and cultures, these designers have invented and re-invented the ‘skirt for men’. In some instances, counter-cultural groups, such as hippies, punks and new romantics, adopted their designs as a symbol of anarchy.

Skirts have also been worn by gay men as a sign of their alternative lifestyle. More recently, other men have begun to wear them as a fashion statement, often endorsed by pop, film and sporting personalities. In the mid-1990s, the footballer David Beckham was photographed in a Jean-Paul Gaultier version of a sarong.

With the exception of the Scottish kilt, men have been reluctant to wear skirted garments. Their adoption by the general male populace will ultimately depend on the re-evaluation of traditional gender conventions. But, through the work of contemporary designers, the idea of ‘men in skirts’ is constantly given new impetus. 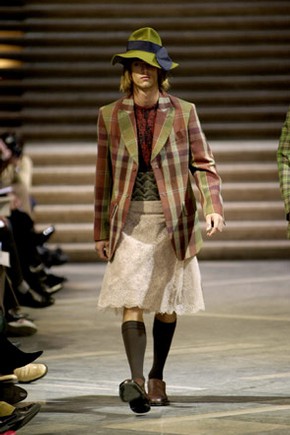 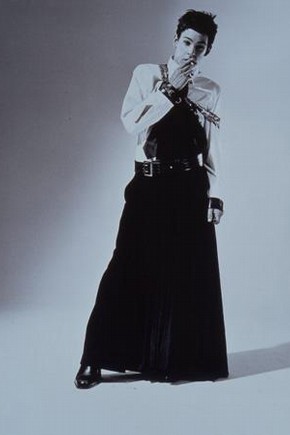