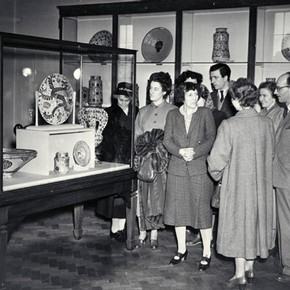 In late 2004, over concern for the security of the collection, the V&A's Ceramics galleries closed to the public. Purpose built in 1909 for the display of the Museum's ceramics collection, the galleries had changed very little over the years and the old cases and displays no longer met modern museum standards or audience expectations.

In 2005 the V&A began the task of funding, redesigning and redisplaying the galleries so that once more the world's most comprehensive ceramics collection could be secured for the study and enjoyment of future generations.

But why has it taken five years and what was involved in the process of creating new galleries at the V&A?

Getting the go ahead

The Ceramics galleries project officially got under way when it was included as part of the V&A's ambitious FuturePlan, an initiative to remodel the whole V&A building.

A specialist project team was formed with members of the Ceramics Section, Asian and Middle Eastern Sections, Conservation Department, Learning and Interpretation Department and Project Department all represented. Initially, the team concentrated on the formulation of plans for the content and design of the new galleries.

Meanwhile, major sponsorship from the Headley Trust was secured.

A variety of stakeholders were consulted. These included artists, designers and curators from both the V&A and other museums. A round table discussion at Yale University in America was also organised and provided an excellent opportunity to test developing ideas with international ceramics experts.

Stanton Williams, a London based architectural company were commissioned as project designers.

The findings of the consultation process were set out in a design brief. This document outlined the main priorities and design principals that guided the refurbishment. It was agreed that the galleries should provide a contemporary, elegant and fresh environment; attracting new and non-traditional audiences to the ceramics galleries while continuing to meet the needs of specialists.

The project was also divided into two phases. Scheduled to open in autumn 2009, the first phase would comprise of a run of seven themed galleries. The second phase, housing a dense display of the study collection in in large cases designed to make optimum use of the height and width of the galleries, was scheduled to open in the summer of 2010. 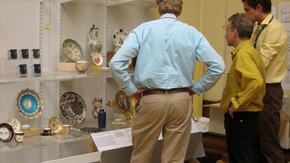 Curators discussing a 'mock up' of a display

Each case in the new galleries has a designated curator, or 'Subject Parent', who was responsible for selecting the content of the finished case. In most instances Subject Parents were chosen because they have a special interest in the period or theme of the display and their expertise enables them to select the best pieces from the collection.

A final selection for each case was not made until all the objects were seen together. As the new cases were not yet installed, the team mocked-up the display on spare shelves to get an idea of how the finished case would look. Where objects did not look quite right together, more suitable pieces were substituted. This tweaking continued until late 2008. 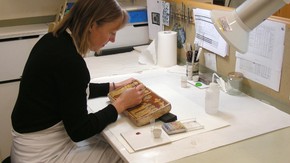 Conservator at work on the ceramics collections

With most of the objects for display in Phase 1 finalised, curators and conservators assessed which objects needed repair or intervention before they can go on back on display. They checked a range of factors which were potential risks for the objects, or make it unsuitable for public display. These included surface effects such as build up of dirt, old repairs, structural damage such as chips and cracks, and chemical and biological damage. Objects needing conservation were then listed in order of priority and the time consuming process of cleaning and repair began. 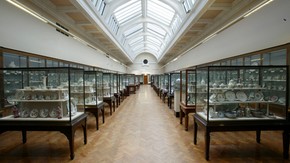 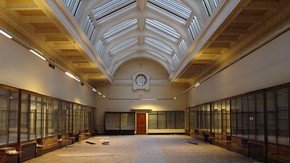 Some 30,000 objects and hundreds of cases had to be moved out of eleven of the fourteen old galleries before the builders could move in and start renovating the empty space. This removals process is referred to as the 'decant' and was carried out in two stages over two years.

The phase 1 'decant' took more than six months to complete - curators and volunteers worked in teams of two, carefully moving objects in wicker baskets placed on trolleys, through the galleries and into the designated storage area. Every object moved had to have its new location recorded on the computerised catalogue 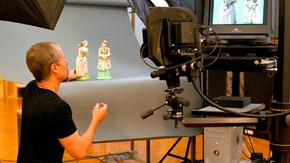 A temporary photography studio was set up in one of the empty galleries so that V&A photographers could easily access the objects they would be photographing. Many objects in the collections had never been photographed before. It was decided that every object going on display in the new galleries would have a colour digital image which will be accessible via the V&A 'Search the Collections' website. 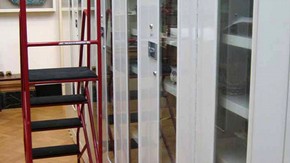 The second decant got underway in 2008 in preparation for the start of construction work in Phase 2 galleries. Objects previously spread across fourteen galleries and condensed to seven galleries in the first decant, were now stored even more tightly so that they fitted in just three unused galleries. Specially designed dense storage cases were brought in to allow objects to be stored safely whilst taking up as little space as possible.

Every object on display in the first phase was provided with a brief label to accompany it. When writing labels, curators tried to combine facts with interpretation. This process was challenging as the word limit was minimal, but fortunately every object in phase 1 featured on the V&A's online 'search the collections' facility. This provided an opportunity for more extensive interpretation. Computers located throughout the new galleries allowed visitors to access this information there and then or from home, via the V&A's website.

The label texts went through multiple edit stages, and the curators consulted with national and international experts to ensure the information on the label was as accurate as possible before finally being signed off for print. 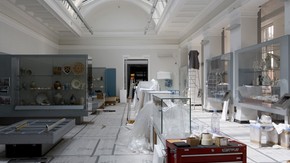 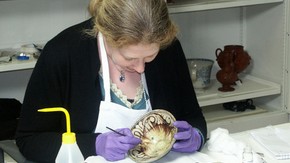 Finally, in May 2009 objects started to be moved back into the galleries. The pieces that had not undergone conservation work were given a final clean to ensure they would be acceptable for public viewing, before being put in place in the brand new cases. Labels, graphics and gallery introduction text panels were also installed. 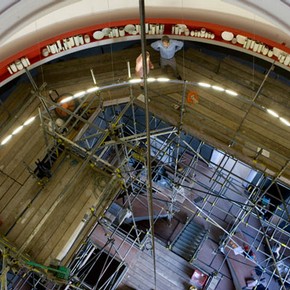 The installation by Edmund de Waal titled 'Signs and Wonders' was constructed in the central dome above gallery 141. A huge scaffolding tower was erected enabling de Waal's team to position some 300 porcelain vessels on a 'floating' red shelf encircling the dome.

Staff, sponsors and experts were invited to see the finished galleries at a private view where HRH The Princess Royal officially opened the galleries. There was just time for a celebratory glass of champagne before the whole process began again for the Phase 2 galleries, opening in 2010!