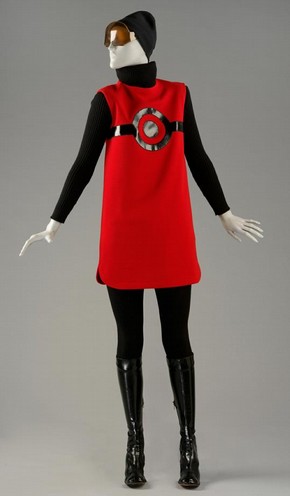 'The clothes that I prefer are those I invent for a life that doesn't exist yet - the world of tomorrow.'
Pierre Cardin Past, Present, Future, 1990.

Pierre Cardin (born 1922) was born in Venice to French parents and educated in France. After training as a tailor, he worked for two Paris design houses, Paquin and Schiaparelli. Dior then employed him during the era of the New Look. Many people expected Cardin to succeed Dior, but he left to set up his own firm in 1950.

During the fifties Cardin opened a menswear boutique in Paris where he sold new, informal men's gear like collarless jackets and roll neck jumpers. He made collarless suits which the Beatles' later stage costume resembled.

By producing a ready-to-wear collection in 1959, Cardin broke the rules of the top French couture guild. However, by doing this he sold clothing to a wider public and many designers followed his example.

His interest in architecture showed up in the geometric shapes which became his trademark in the 1960s. His dresses were decorated with circular and rectangular motifs. He preferred crisp, supple textiles like wool crepe and jersey, manufactured by the Italian firm Nattier.

Cardin was also fascinated by new 'space age' materials like vinyl, silver fabrics and large zips. He added moulded plastic visors to helmet-like hats to make them resemble astronauts' headgear. During the 1960s Cardin sold widely in the US and the UK through department stores like Selfridges. Today Cardin boutiques worldwide sell a whole range of fashion,
accessories and toiletries.