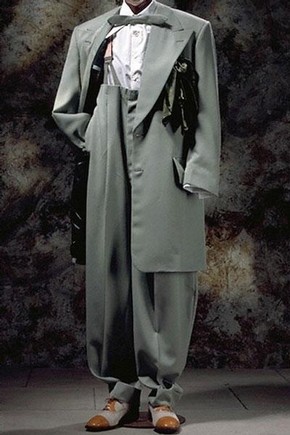 Despite being worn by a relatively small number of people, who themselves formed part of a minority in early 1940s America, the zoot suit occupies a conspicuous place within the intertwined histories of fashion and cultural identity. For this reason, a recreated zoot suit was included in the exhibition 'Streetstyle, From Sidewalk to Catwalk, 1940 to Tomorrow' held at the Victoria and Albert Museum (V&A) in 1994-5. The exhibition, which traced the development of 'subcultural' fashions, included the suit as an example of an early subcultural style. The replica suit was later acquired by the V&A's Textiles and Dress department as an example of a distinctive style of dress which represents a critical moment in the history of race relations.

The origins of the zoot suit are unclear. What is clear, however, is that as a style it became strongly associated with young working class black, Hispanic and Filipino men living in urban areas of North America in the early 1940s. 'Zoot' meant something worn or performed in an extravagant style and the zoot suit was an exaggerated, elaborate form of dress.

The suit consisted of a long jacket with wide lapels and padded shoulders and high-waisted, wide-legged, tight-cuffed pegged trousers worn with a flat-crowned, wide-brimmed hat, a 'ducktail' hair style, thick-soled pointed shoes and a long watch chain. The attitude adopted by the wearer of the zoot suit was equally important. As writer Thomas Sanchez had one of his characters in his 1978 novel 'Zoot-Suit Murders' declare;

In his autobiography, Malcolm X (then Malcolm Little) recalled the excitement of purchasing his first zoot suit at the age of fifteen. His description emphasises the importance of 'striking the pose':

'I was measured, and the young salesman picked off a rack a zoot suit that was just wild: sky-blue pants thirty inches in the knee and angle narrowed down to twelve inches at the bottom, and a long coat that pinched my waist and flared out below my knees. As a gift, the salesman said, the store would give me a narrow leather belt with my initial 'L' on it. Then he said I ought to also buy a hat, and I did - blue, with a feather in the four-inch brim. Then the store gave me another present: a long, thick-lined, gold plated chain that swung down lower than my coat hem. I was sold forever on credit. … I took three of those twenty-five cent sepia-toned, while-you wait pictures of myself, posed the way 'hipsters' wearing their zoots would 'cool it' - hat angled, knees drawn close together, feet wide apart, both index fingers jabbed toward the floor. The long coat and swinging chain and the Punjab pants were much more dramatic if you stood that way.' 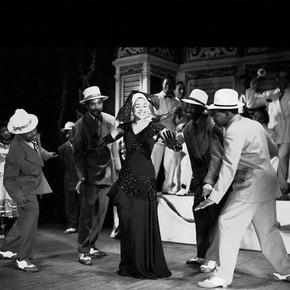 Zoot-suited performers and singer Mabel Lee in a performance of 'Carmen Jones' at the London Playhouse, 1948. Photograph by Houston Rogers

One of the reasons behind the adoption of the suit by the young and disenfranchised was its association with some of America's most prominent black musicians and performers. Dizzie Gillespie's choice of a zoot suit helped popularise the style as did zootsuited members of the cast of 'Carmen Jones', the broadway musical which transported George Bizet's Carmen to an African-American setting.

The V&A's replica suit was based on the most famous zoot suit; that worn by Cab Calloway in the high-profile 20th Century Fox musical film, 'Stormy Weather'. Purportedly made before rationing orders were introduced which restricted the purchase of cloth, the suit cost a phenomenal $185.

The self-confidence and assertiveness shown by young zoot-suiters, most of whom were from communities marked by poverty and racial discrimination, hit a nerve in wartime America. So too did the extravagant amount of cloth used in the creation of zoot suits, which contravened rationing regulations introduced in 1942.

In 1943 simmering tensions between zoot-suiters and white servicemen stationed along the Pacific coast and in the industrial cities of Los Angeles, Detroit and Pittsburgh erupted in a series of violent episodes. The zoot suit provided a focus for what was essentially a racial conflict: white servicemen toured black and Hispanic neighbourhoods, stopping streetcars and buses and entering theatres. Zoot-suiters were dragged out onto the street and assaulted. Many had their clothes ripped off and their long hair cut. Despite the brutality of these incidents, most press coverage was sympathetic to the servicemen, as were officials, including the police, who frequently arrested victims rather than perpetrators of the violence. Military intervention, press appeals for calm and investigatory committees eventually put an end to the riots. However, the social injustices which lay behind them remained unchallenged and unchanged.

Perhaps predictably, following the relaxation of rationing regulations after the war ended, the zoot suit re-entered the fashion scene, now as a mainstream style. By 1948 a slimmed-down version of the suit was being marketed by the American fashion industry as a new, postwar 'bold look' for the average (white) man. In this way, the zoot suit reflects a 'bottom-up' movement rather than 'top-down' in the diffusion of fashion, i.e. a form of streetwear inspiring designers of high and mainstream wear rather than the other way round. This 'bottom-up' movement was one of the central themes of the exhibition in which the V&A's recreated suit was displayed. 'Streetstyle' sought to highlight the importance of streetwear on high and mainstream fashion. The zoot suit represented one of the earliest styles of streetwear on display. Strenuous efforts by curators and exhibition researchers failed to identify an original suit so a replica was commissioned from Chris Ruocco Tailors, London. In the display the pale green wool two-piece was worn with a cotton shirt and wool bow tie (also by Chris Ruocco), a satin handkerchief, braces and leather shoes.