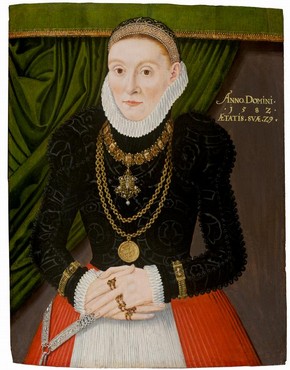 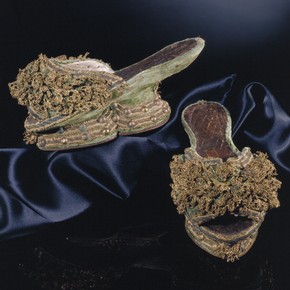 Velvet, wood and leather pianelle with gilded silver braid and bobbin lace, Venice, Italy, about 1600. Museum no. 929&A-1901

During the Renaissance period women wore long dresses, often with detachable sleeves. These sleeves were sometimes gifts from the groom to his new wife, but could also be passed down from mother to daughter or aunt to niece, or even be rented. To keep their dresses clean, women wore washable aprons or overdresses, with linen chemises and shifts as underwear.

This painting shows a woman wearing a jacket made of expensive Italian velvet, showing not only the fashion in Germany but also the international trade in textiles. Along with the great quantity of jewellery, the velvet indicates her wealthy position in German society. The huge medallion on a chain round her neck is probably meant to be a português, a Portugese gold coin worth ten ducats. The painting is inscribed in Latin 'In the Year of Our Lord 1582. Aged 29.'

When young and unmarried, women wore their hair loose, but once married they tied it up in complicated braids and twists. Matrons often covered their hair with veils, and the hooded veil was a sign of the widow. Nuns wore habits and wimples, indicating their order by the colour of their habit: brown for the Franciscans and black and white for the Dominicans.

Imported fabrics and rich textiles demonstrated wealth, but not always nobility. More than one complaint was raised against Venetian courtesans for dressing like 'ladies', and visitors remarked that they could not tell the courtesans from respectable women. This was because both categories of women wore similar low-cut dresses and high shoes (pianelle).

Pianelle were much like today's open-toed mules or platform sandals, but grew to staggering heights during the Renaissance, especially in Venice. This was ostensibly so a woman could keep her dress well above the muck and damp of the streets. But in reality it allowed her to show off her wealth and her attractive swaying gait, since in order to wear the shoes without falling over she had to have a servant in attendance on either side. The origin of the fashion is unclear. It might have come from Turkey, but was also popular in Moorish Spain. The style could have travelled to Venice via either route, or reflect the fashion for 'eastern' dress in Venice at the time.