'Once she has given birth, she should not go out in the cold and wind until all her limbs have fully regained their strength.'
(Leon Battista Alberti, On the Family (Della Famiglia) Book II 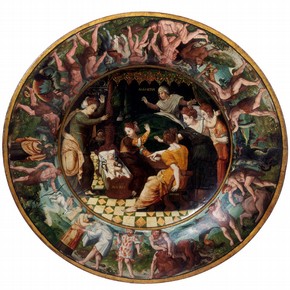 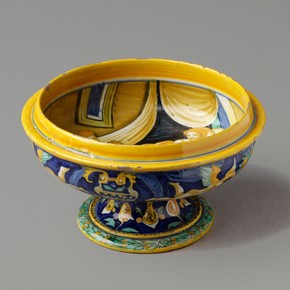 Tin-glazed earthenware broth-bowl from an accouchement set, with painted birth scene by Francesco Xanto, Urbino, Italy, about 1530. Museum no. C.2241-1910 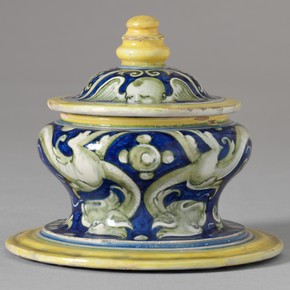 Tin-glazed earthenware salt cellar and cover from an accouchement set, Italy, about 1525. This would have held the salt needed to season the chicken broth brought to revive the mother after the difficulties of childbirth. Museum no. 7142&A-1861 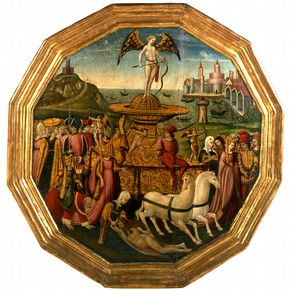 'The The Triumph of Love', tempera painting on wooden birth tray, from the workshop of Apollonio di Giovanni, Forence, Italy, about 1460-70. Museum no. 144-1869

In 15th-century Florence, girls usually married between the ages of 15 and 19, and their childbearing peaked between the ages of 20 and 24. Because of the common practice of sending children out to wet-nurses, time between pregnancies was brief, so that average number of children born to one mother was between 5 and 7. If she lived to around the age of 45, then that figure could rise to 10 children, but the dangers of pregnancy were such that this was uncommon.

Pregnancy and childbirth were dangerous times in a woman's life, and most women wrote their wills once they knew they were pregnant. To safeguard and reassure the pregnant woman facing these risks, or to celebrate a successful birth, there were special foods and objects, including birth trays and amulets. After she had given birth, the lady of the house would enjoy a lying-in period. As the quote from Alberti shows, this time was not strictly defined, but the fact that most women did not attend the baptism of their children indicates that it would last at least a few days.

During this time she would receive visits from friends and family to congratulate her on the safe delivery of her child. The new mother would be given a birth tray, or desco da parto , laden with jars containing chicken soup and sweetmeats. This would then be hung on the wall of her bedchamber. Decorated with subjects suitable to the occasion, these trays were particularly fashionable in Tuscany in the 15th century.

By about 1500, maiolica bowls painted on the inside with biblical births and flamboyant moresque patterns on the outside were becoming more popular, as were wooden bowls decorated in a similar manner (tafferie di parto). The birth trays were specially commissioned, or bought ready-made with a blank space for a personal coat of arms or emblem.

Birth trays were not only the preserve of the rich. Less wealthy people could get cheaper versions, with smaller amounts of expensive gilt decoration, or they could take advantage of the lively second-hand trade in objects associated with pregnancy. Artisans and shopkeepers – from butchers to apothecaries – as well as nobles and bankers could therefore afford to give their wives a version of these trays.

The tray from the workshop of Apollonio di Giovanni, who also painted cassoni (wedding chests) is painted with imagery deriving from the Triumph of Love by the Florentine poet Petrarch (1304–1374). In his poem Petrarch adapted the idea of ancient Roman triumphal processions, in which a victorious emperor returning from the front entered the city through a triumphal arch.

The tray shows a naked Cupid atop his chariot and identifiable by his wings and bow and arrows. The other figures also feature in the Triumph of Love, though the painter has added well known incidents in their lives to make them recognisable to the viewer.

In the foreground, we can see Delilah cutting off Samson’s hair, the source of his superhuman strength, before delivering him to the waiting Philistines. To the left is Phyllis, fictional mistress of Alexander the Great, riding upon the back of the philosopher Aristotle. As Alexander’s tutor and counsellor, Aristotle tried to separate his pupil from his paramour, who was absorbing all his time and energy, and causing him to neglect his duties. In vengeance at this interference, and to prove that no man was immune to the power of love, Phyllis seduced Aristotle and showed her control over him by saddling him and riding around the garden.

These antics illustrate a bizarre topsy-turvy world where woman rather than man rules the roost. This was a popular subject in Renaissance art and literature. Cheaply produced broadsheets and prints showed wives wearing the trousers, beating their husbands and forcing them to stay at home and look after the children.

The figures of Samson and Delilah and Aristotle and Phyllis may have served as a humorous warning to men not to let women dominate them, while the woman who received such a gift may have been flattered at this reference to her powers of seduction. The central message of the tray, however, can probably be found in the figure of Cupid. This image of a healthy young male was probably thought to have a talismanic effect, encouraging the generation of healthy baby boys, especially if the tray were hung in the bedchamber.

The power of the imagination

'Have pictures of saintly children or young virgins in the home, in which your child, still in swaddling clothes, may take delight…There should be a good representation of Jesus nursing, sleeping in His Mother's lap or standing courteously before Her while they look at each other.'
(Giovanni Dominici, Rules on the Governing and Care of the Family (Regola del Governo di Cura Familiare), about 1400 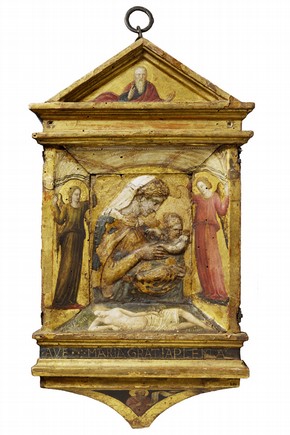 Painted and gilded stucco relief depicting the Virgin and Child, by Donatello, wooden frame probably painted by Paolo di Stefano, Florence, Italy, about 1435-40. Museum no. A.45-1926

In every Renaissance bedroom, there was typically at least one image of the Virgin and Child, very often a print, painting or relief set in a carved, painted and gilded wooden frame. These images were hung high on the wall so that the holy figures could watch over the enclosed space, protecting those within it by their presence. During the 15th century the Church was increasingly keen to promote piety among its followers. One way of accomplishing this was through humanising the holy figures of Christ and the Virgin, an approach that was complimented by the new realistic tendencies in art. Depictions of the tender relationship between mother and child, with a smiling Virgin and playful Christ Child, became increasingly popular. Devotees were expected to kneel and pray before these images, and be moved by them.

The aim of these objects was not wholly to inspire religious devotion; they also played an important role in the promotion of birth and marriage. A relief of the infant Christ, the ideal child, and the Madonna, the ideal mother, would have been a good example for new brides and for mothers in general. This imagery was also thought to inspire women to conceive. Madonna and Child reliefs were often bought in the months before and after a wedding in order to stimulate the fertile female imagination into producing male children.

A woman's imagination was thought to be instrumental in determining such characteristics as the sex and looks of the unborn child. For this reason, it was considered advisable to surround a woman, at the time of conception and throughout the pregnancy, with beautiful images of children, and especially with images of baby boys. Terrifying examples of the fertile female imagination gone awry were plentiful and sensational - the Protestant reformer Martin Luther, for instance, gave a lecture in which he cited the case of a woman who gave birth to a mouse after one surprised her during her pregnancy. As a result, the doctors and the writers of bestiaries (encyclopaedias of animals, both real and fictional) warned women not to look at or think of beasts at certain times.How much better, therefore, to have a picture of the baby Jesus hanging on the bedroom wall to provide the future mother with an appropriate image for her child.

'The Lady to the Nurse: How now, how doth the child? ... Unswaddle him, undo his swaddling bands...Pull off his shirt, thou art pretty and fat my little darling …Now swaddle him again, But first put on his biggin.' (From a dialogue, The French Garden, by Claudius Hollybrand and Peter Erondell, 1605) 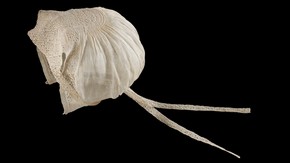 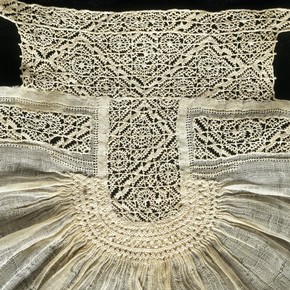 In this quote, the solicitous mother mentions an item of clothing found throughout Renaissance Europe. A 'biggin' was a baby's cap like the one illustrated here, although often it was less ornate and warmer than this delicate lace example.

Babies' and infants' heads were always kept covered against the cold. When they went outside young girls would wear hoods and young boys a type of pork-pie hat, often decorated with feathers. Children went on wearing caps throughout their infancy. Boys stopped wearing them after breeching - that is to say when they started wearing trousers rather than skirts, usually between the age of 6 and 8 years old. Girls wore coifs, often decorated with lace, until their teens. For a brief period before she married, a maiden's hair was unbound and visible, but as soon as she married it was braided into elaborate coiffeurs and covered by a veil.

This bonnet is made of linen and cutwork lace, made by cutting spaces into a fine linen ground and then filling them with a delicate structure of needle lace. The lace indicates that the baby must have been born into a rich family, as lace was a luxury item that emphasised wealth and social standing. That is why royal children are often painted festooned with lace, on their collars, on their wrists and on their heads. Royal babies, tightly wrapped in swaddling clothes, are shown with lace-worked caps and sometimes lace trimmings to their swaddling bands.

Swaddling was used to keep children warm, and to ensure proper growth by preventing any movement of their limbs. Wrapped in swaddling bands and wearing a little cap, a new baby would be presented to the guests who came to visit the mother during her confinement.